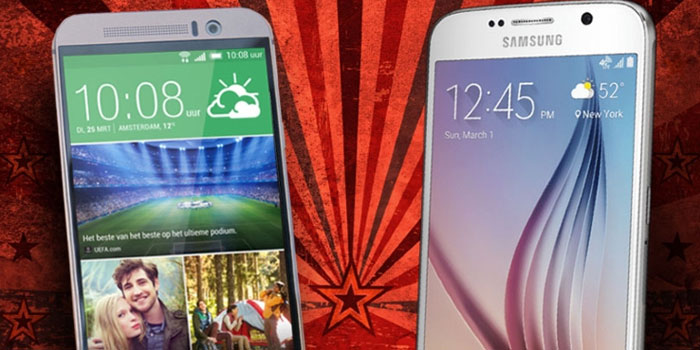 Finally, two of the most anticipated Android phones of the year are here. Which one comes out on top? Let’s find out.

There are definite similarities in the handset when it comes to hardware. Both the S6 and M9 use a 64-bit Octa Core processor, have 3B RAM, both come in a 32GB model. In the connectivity department, they share Dual-band Wi-Fi, Bluetooth 4.1, NFC, IR Blasters, micro-USB port for charging and data transfer and both devices run Android 5.0 Lollipop.

The S6 was designed from scratch and thank God Samsung got rid of the plastic and faux leather body and replaced it with premium glass and metal. The phone is not only great to look at but is a pleasure to hold and use. It uses Gorilla Glass on the front and back of the device and its all held together by a full metal frame.

When it comes to design, HTC One M9 is pretty similar to its predecessors the M7 and M8 in terms of overall looks, though that is not a bad thing at all since they were gorgeous. There are slight changes but the major aspects remain the same such as the all metal body. Slight changes have been made to the sides and the back of the phone for better grip.

The S6 comes with Samsung’s own 64-bit Exynos 7420 octa-core processor with four cores clocked at 1.5GHz and four cores clocked at 2.1GHz. It has 32GB/64GB/128GB models with 3GB of DDR4 RAM and the memory is not expandable. Keep in mind the Exynos is a 14nm chip so it should run cooler than the Snapdragon. Furthermore, Samsung is using a faster version of memory called UFS which has a significant speed advantage.

Samsung has opted to use a 16MP Sony sensor and the camera comes with autofocus, LED Flash, F1.9 aperture, ISOCELL technology and OIS. The speedy camera takes less than a second to launch. The front facing camera has also been improved upon; the 5MP camera is great for taking selfies and video chats even in low light conditions.

When it comes to the camera HTC One M9 really exceeds expectations with its Sony 20.7MP sensor with autofocus, dual-tone LED flash but sadly no OIS, which is a fairly significant omission. The One M9 has a 4MP UltraPixel camera at the front.

S6 has a non-removable, wireless charging enabled 2550mAh battery that can be charged to last up to 4 hours in just 10 minutes. Though the battery is smaller, it should last for an entire day.

The M9 has 2840mAh non-removable battery and supports Quick Charge 2.0 thanks to its Qualcomm processor.

The Galaxy S6 has a fingerprint scanner, heart rate sensor, IR Blaster and active noise cancellation with additional microphone. The speakers are on the bottom of the phone. It comes in 4 colors i.e. White Pearl, Black Sapphire, Gold Platinum and Blue Topaz. Samsung Galaxy S6 will be running Android 5.0 Lollipop, and is expected to be released worldwide on April 10.

The HTC One M9 keeps the dual front-facing stereo speakers with BoomSound, comes with IR Blaster, stereo FM radio and comes in Gunmetal Gray, Amber Gold, Silver/Rose Gold and Gold/Pink.  It should be available in the market in March running Android 5.0 Lollipop.

If I would to get my hands on either one of them (though I wouldn’t mind getting both of them), I would go for Samsung Galaxy S6 as it has been designed from scratch and is a beauty to look. Aside from looks, it outshines the M9 in terms of features such as greater camera options, fingerprint scanner and heart rate sensor as well as optical image stabilization in the camera. The faster UFS memory could also prove to be a significant advantage.