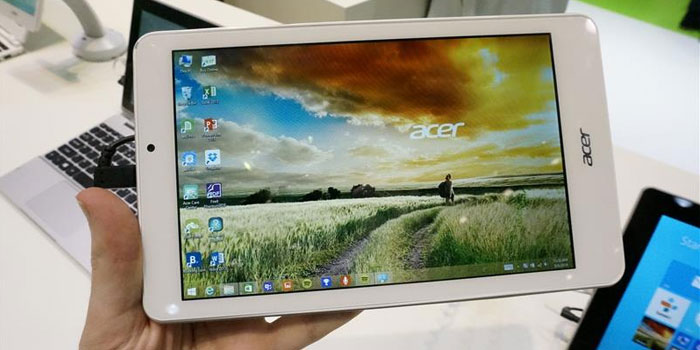 Acer has unveiled the follow-up to the Iconia Tab A3 with a cheap but a quality tablet.

The Acer Iconia 10 has improved upon its predecessors and now comes with an option of a FullHD screen with 1920×1200 (WUXGA) resolution. This puts the screen at a 16:10 aspect ratio like its predecessor.

The new tablet comes in two versions. The higher priced version comes with a 10.1” 1920×1200 screen, 2GB of RAM and 32GB of built-in storage. The tablet is powered by a MediaTek MT8217 chipset with a quad-core Cortex-A7 processor clocked at 1.5GHz. To further improve the feel of touchscreen, Acer has laminated the display to the front-glass making the contents of the screen pop-out. This version is priced at $250.

The other version is a cheaper $200 tablet with a lower screen resolution of 1280×800 and half the RAM of the higher priced version. The storage is halved to 16GB too and the processor is downclocked to 1.3 GHz.

The tablets come with 2MP front and rear cameras and Dolby Audio Tech for sound optimization. The tablets are available in Black and White color variations but there is no cellular connectivity option available.

Both the tablets come with an older Kitkat Android version. With Iconia 10, Acer has put itself in direct competition with the Nexus and Asus tablet line-ups. With such a small difference in price, buyers would be wise to choose the superior but slightly expensive model.