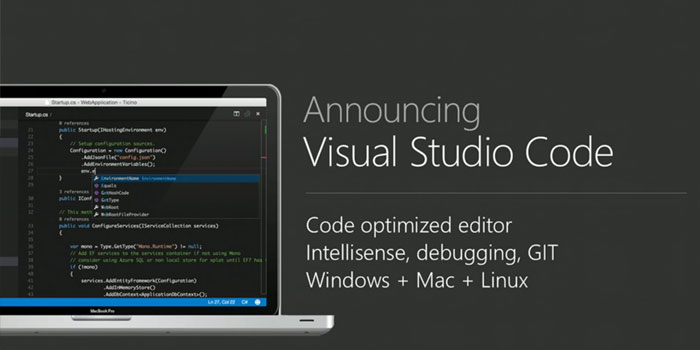 Microsoft Visual Studio Code is still in preview but is fully functional. This marks the first time that Microsoft has released a true cross-platform code editor. The full Visual Studio is still Windows only though, but releasing a cross platform editor shows Microsoft’s new strategy for supporting other platforms.

Visual Studio Code is quite different from the otherwise similarly named Visual Studio. It is lighter and designed for code editing only while the complete Visual Studio remains a much larger Integrated Development Environment (IDE) which consists of everything from form editors to database integration. Microsoft’s Corporate VP of its Developer Division stated:

A lot of people use Windows as their development environment but we are also seeing a lot of people on Linux and Mac. Instead of making them go to Windows, we want to meet them where they are.

Visual Studio Code gives developers built-in multi-language support and the editor will feature rich code assistance and navigation for JavaScript, TypeScript, Node.js and ASP.NET. The editor includes all the code editing tools expected from a modern editor including syntax highlighting, customisable keyboard bindings, snippets and bracket matching. The editor also works with Git without any additional hassle though portable versions of Git are not currently supported.

The new editor is based on Microsoft’s experience with the online Monaco editor. Microsoft announced that Roselyn project, Microsoft’s .NET platform and language services built for the Visual Studio Code will become available for other editors like Atom, Sublime Text and Vi as well. In an effort to support developers with their current editor tools, Microsoft launched a TypeScript plug-in for Sublime Text and Somasegar has implied that the company will stay committed to launching similar projects in the future as well.

These set of announcements were quite surprising but they do seem to be according to the company’s new direction undertaken by the CEO Satya Nadella. Microsoft’s developer group has been moving in the direction for quite some time now with steps like open sourcing the .NET Core and launching the Visual Studio Community Edition.