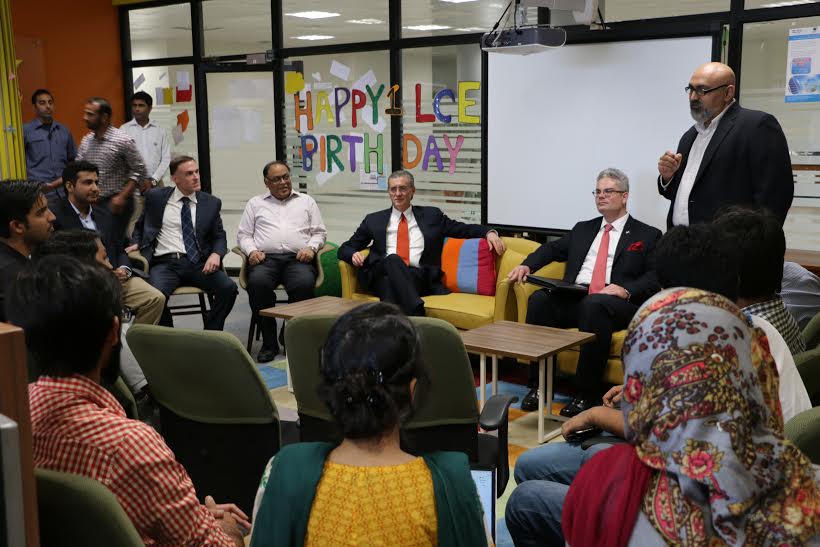 Mr. Olson was welcomed by Mr. Khurram Zafar, Executive Director LCE, who showed him around the center and briefed him about its activities. He explained that since the center’s founding a year ago, it has mentored and groomed over 80 entrepreneurs and its startup businesses have created a total of over 120 direct and 350+ indirect jobs.

The combined annualized revenue of the startups based on last month’s figures is approaching $250,000. These young businesses have also raised nearly $600,000 in investment from local and foreign investors. Moreover, the combined valuation of the businesses at which these startups have raised money at, or have had investor termsheets offered, is over $5 Million.

Mr. Zafar then introduced the ambassador to the current batch of 16 incubated startups that are working on various high growth and/or high impact businesses such as iCarriage, developing a cutting edge marketing solution for retailers and consumers; Technician.pk, a service provider for home and office repair services; iDarzi, a venture providing customized, designer clothing stitching and delivery services for women through a few taps on a phone; King Kashmiri, manufacturing and distribution of a very sought-after, instant, hot beverage; and Harbinger Comics, a startups working on development and distribution of comics with a message that tackles local problems.

Addressing the young passionate entrepreneurs, Ambassador Olson praised the LUMS Center for Entrepreneurship as a great example of an entity that is giving entrepreneurs the tools they need to turn their bright ideas into real businesses that can transform Pakistan’s economy.

Ambassador Olson also highlighted several ways in which the U.S. Embassy is supporting entrepreneurship in Pakistan, including professional and academic exchanges and USAID’s recently launched Pakistan Private Investment Initiative to facilitate access to finance for small- and medium-sized Pakistani enterprises.