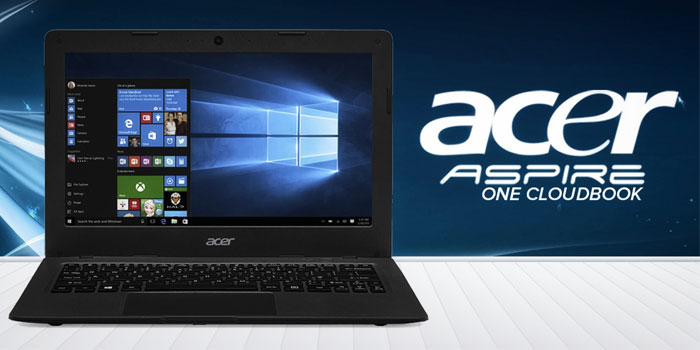 To the surprise of many, ChromeBooks, even with those modest reviews and singular functionality are a success. To date, not many people can fathom shelling a few hundred dollars on what is mainly a web browser with few features added here and there. But it is clear that those are here and here to stay.

So naturally a need for combat was felt by Microsoft. And how is it doing that exactly? Well, naturally, using the same OEMs that make ChromeBooks.

The end-product of this partnership are the new Aspire One Cloudbooks by Acer. They come in two variants: 11 and 14 inch and run on the new Windows 10 Home, perhaps their biggest feature. The software is likely optimized to run on low-end hardware.

Like a Chromebook they’re light and thin and as a result, easy to carry around. Another perk is the full-size keyboard. Under the hood, they pack a 1.6 Ghz Intel Celeron processor, 2 GB RAM and 16/32/64 GB storage options. For connectivity, you get HDMI, USB, Bluetooth and expansion via SD card.

They have a battery life of up to 6 or 7 hours. Cost-saving is the priority, as evident by the 480p webcam on the front, rather than the usual HD. As a part of the deal, you get 1 year subscriptions of Office 365 Personal and 1 TB worth storage on OneDrive, since Cloudbook.

As for the price, both the 11 and 14 inch variants start at a very acceptable $169 and $199 respectively. The Cloudbook 11 will be available starting from August, while for 14 you’ll have to wait a month more.

Truth be told, it is the entire package of a ChromeBook – usable keyboard, long battery life, (mostly) smooth experience and acceptable price, mainly – that make them a likeable prospect. While Acer has hit the homerun with that last one, and on paper offers even more software to play with, it is only via actual handling that we’ll know for sure how successful Acer has been.