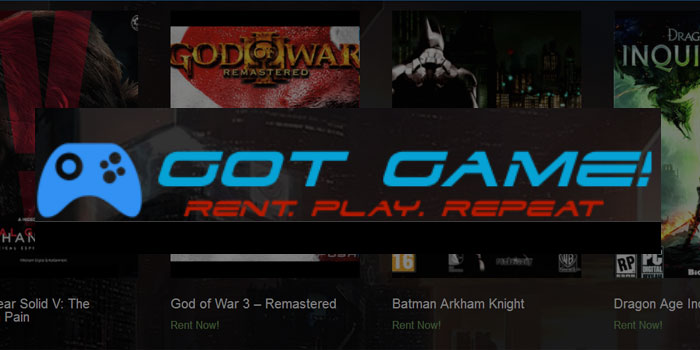 Getting games for your current generation game console is, for most Pakistanis, a prohibitively expensive option. Both the Microsoft Xbox One and Sony PS4 (among others) possess strong anti-piracy measures, which make the possibility of playing counterfeit game copies non-existent for now.

In light of this, getting that new copy of Batman Arkham Knight or MGSV – The Phantom Pain would severely eat into the budgets of Pakistani current gen console owners. These games, newly released, would set back the buyer a whopping Rs. 6000 on average. A used copy might sell for considerably less but, for the majority of game players, some titles are just meant to be finished once and then relegated to the DVD (or is it BluRay) pile.

It was going to be tough for many Pakistani gamers to invest in either a Xbox One or PS4. Until now that is.

I recently tried out GotGame.Pk, a Pakistani startup that rents out the most popular titles to its customers for a nominal monthly fee. Since services like these tend to be non-existent here, especially considering the renting out of original game discs with couple of thousands in value, I tested the service for a month.

The tiny annoyance? Games are sent and delivered via courier which may entail a 2-3 day wait between swapping out one game for another. Not a deal breaker per se since this is up to the courier level and not the service providers themselves.

A Word About the Co-Founder

Zamin Zaidi, Co-Founder of GotGame.Pk, is an avid gamer himself. He foresaw how gaming experiences were now about playing online legitimately with a group of friends and how tight security features in modern console might deprive Pakistani gamers from enjoying the latest and the greatest games as a result. Not everyone could continue to slay some demons, frag some opponents or race them super-detailed race cars in current-gen 60 FPS if the current state of affairs continued to persist.

This needed to be fixed. And Zamin came up with a service that’s akin to Gamefly in America – a service that combines affordability with convenience for today’s console gamers in Pakistan.

The Big Question – How Much Does It Cost?

People want to know how the service works and what they charge avid Pakistani gamers for it. Lets get those numbers outta the way first:

Rs.  6,900 is what you pay the first time you opt for the service. The inclusion of a refundable security deposit is good for both parties and if you think about it, it’s roughly what one would pay for a new PS4 / Xbox One game. For ‘enterprising’ folks who got funny ideas about not returning the game, that pretty much insures both parties from incurring additional financial penalties.

Games can be exchanged as many times as you like in a month. No extra charges. Just a monthly fee of Rs. 1,400 applies. Payments can be made by Easypaisa, Credit/Debit card, Bank Deposit or Online Bank Transfer. However I relied on paying the TCS courier guy who came to deliver the disc.

The disc was in a sealed parcel and once you make the payment to the courier, it can be yours to tear away and reveal the game you so can’t wait to pop up in the console and play straightaway. Of course console owners know that I had to wait for the pesky installation process to finish first before I could start.

This writer got Batman – Arkham Knight as the first rental and as the story goes, spent a month achieving that 100% completion rate. Spoiler Alert: He could only manage 98% and had to google the true ending of Arkham Knight. Blame the Riddler for this one folks.

How Do You Request Your Favorite Games and See What’s Available?

The GotGame.pk website is your starting point. After registering your account, you will have to select from the list of available games on their website. You need to select each game and checkout one by one, to build up your rental games queue.

The rental games queue is a good idea on part of GotGame, since they can send you titles based on priority/availability status. Arkham Knight was pretty hot when I ordered it a month ago and even though multiple customers of GotGame had it, the company personally ensured that a copy of the most anticipated game was at hand for all new/old customers alike.

And lest I forget, the next game I got from them was Alien: Isolation. Try avoiding that Xenomorph on Hard Mode folks. Still trying hard not to throw that controller on the wall.

In the run-up to Eid-ul-Azha, many console owners might want to rent out MGSV or Gears of War Ultimate Edition or other high profile games. GotGame has a modest library of all the popular games which you can rent out right now, with new ones in the pipeline as they get released. If you want to game on the cheap (and even try out some hidden gems you otherwise wouldn’t have due to high prices), this Pakistani startup has got you covered.

Now if you don’t mind, I need to escape that space station with an Alien, some trigger-happy humans and some seriously creepy androids that really want to bash my head in.