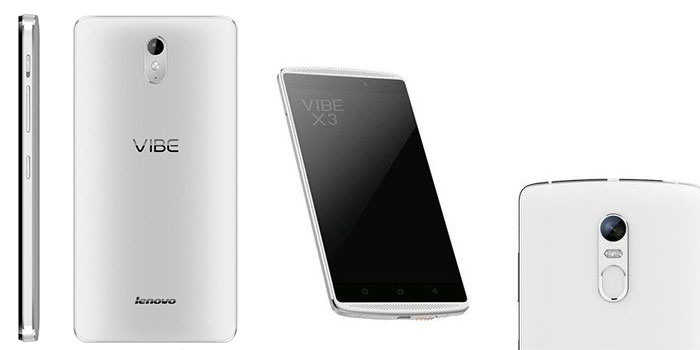 Lenovo, the Chinese tech giant has refreshed its high-end smartphone lineup with the Lenovo Vibe X3, It will be available in three models. Two of them are going to be running a Snapdragon 808, while the third one will have a MediaTek chipset. For the  each of the two Snapdragon 808 models, the following CPU configurations will apply:

As said earlier, there are going to be a total of three Lenovo Vibe X3 models, with two of them divided by the amount of internal storage present in them. The highest specification model will have 64GB of internal memory, while the other model will come with 32GB of storage. All other specifications remain unchanged. Lenovo Vibe X3 will also provide support for a microSD card slot, as well enough space for two SIM cards.

There is 3GB of RAM present in both models. A 23MP IMX230 rear camera sensor from Sony will definitely bring more life to your images. For selfies, there is an 8MP camera sensor, but unfortunately, there is no LED flash present on the front side of Lenovo Vibe X3 to capture accurate images in low-light conditions. The MediaTek version will have an octa-core processor running at a speed of 1.3GHz. This model will also come with 2GB of RAM present. Instead of a 3,600mAh battery in the other models, this one comes with 3,400mAh of battery capacity.

Lenovo also sacrificed the rear camera of the third model because it has a 16MP sensor instead of a 23MP one. However, there is a fingerprint scanner present on all three models.

Lenovo is hoping that this model lets the OEM manufacturer return to profitability after registering its first loss in six years recently.