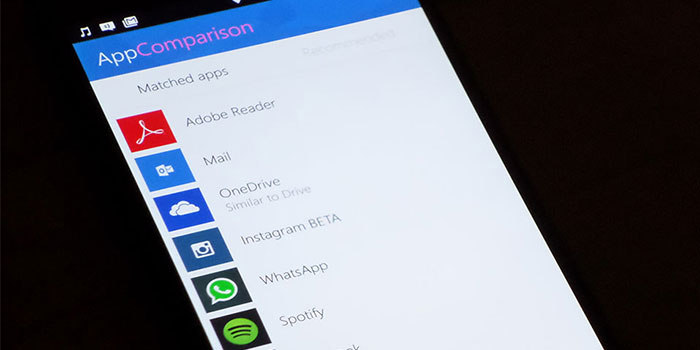 App shortage or the “app gap” has been the major reason why people haven’t jumped ship from Android and iOS to any other platform. Despite offering decent spec-ed phones, Windows Mobile is struggling with less than 2 percent of the market share. With AppComparison for Android, Microsoft wants to send a message that the app gap is no longer a problem faced by the Windows platform.

Lack of apps has been a perennial problem since Windows Phone 7. With Microsoft putting up new flagships, the Lumia 950 and 950 XL, it wants the users to take the platform seriously. Microsoft’s new app is proof that the applications you have been using on your current Android smartphone are available on the Windows Platform as well.

It is no hidden secret that the Windows Store has far less apps compared to the Google Play Store or the Apple App Store but mere numbers can’t possibly portray the real catalogue of quality apps used by most of the users. AppComparison does the job for the users by giving them alternatives for the apps installed on their device. It does this by getting access to the list apps installed on the smartphone and looking up the same apps on the Windows Store. If it fails to find the same app, it suggests alternatives to those apps as well.

How does it Work?

After installing and opening the app you will find the frequently used category at the forefront. It’s the list of apps mostly used on your phone. The app will list whether the same app is available on the Windows platform. It’s worth mentioning that none of the Google apps are available on Windows. You will be notified of alternatives to apps like Chrome, Drive, Gmail, Google App, Hangouts, etc like the UC Browser, OneDrive, Outlook, Bing, GChat+ respectively. 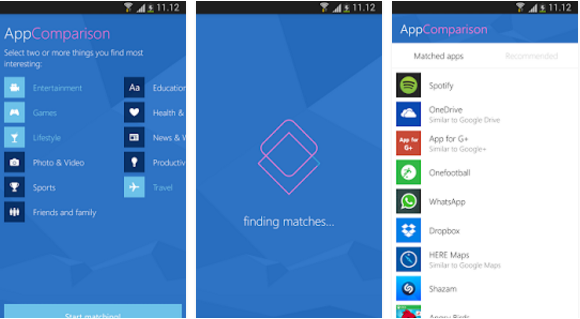 Can AppComparison Help in Swaying the Tide Towards Windows Phones?

The first step to switching to a new platform is indeed finding the apps on it and Microsoft have released a good service here. The good thing is that Windows has increased its app catalogue tremendously with most popular apps on Android also being available on Windows now. Of course, if you find Google’s great apps as your daily drivers, you will have quite a tough time switching to Microsoft owned alternatives if there are any.

This app can also prove to be a double-edged sword. People might get unmotivated to switch to Windows Phone when they don’t find the exact same apps on Windows.

You can take the app for a spin from the Play Store here.

Do let us know if Microsoft has the app you like or there’s still some killer apps which is still missing from the Windows Store.