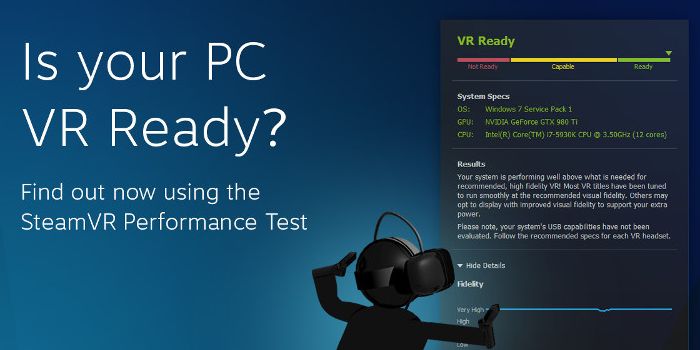 In just a few more months, we will have access to two of the top three virtual reality headsets. HTC has already begun taking pre-orders for its SteamVR powered Vive headset. But do users have any idea whether their PCs are capable of handling virtual reality content at optimum levels? Valve has released a test for that and unlike the Oculus test which just looks at the hardware, this performance checking tool goes into more detail and takes about two minutes to find out if a PC is VR Ready.

The Oculus Rift Compatibility Tool doesn’t run a detailed diagnostic but Valve’s tool has the missing feature. The tool takes a few minutes to run through a small and non-interactive animation of a GLaDOS robot repair facility (Yes, it’s just like the same villain from the Portal series). The goal of the animation is to determine whether the system can handle the load and process any decent VR content. Valve’s tool determines “whether your system is capable of running VR content at 90fps and whether VR content can tune the visual fidelity up to the recommended level,” said a Valve blog post.

After going through the benchmark, the tool outputs an average fidelity rating in both, a numerical and rating scale. The rating scale consists of Low/Medium/High/Very High grades. It also details what percentage of the frame rate managed to meet the minimum requirement of 90 frames per second (fps). 90 fps is slated as a recommendation for a smooth VR experience. There’s more details available as well, like how many frames were bound by the CPU and not the GPU.

Valve does warn that “the varying CPU cost of positional tracking and processing-intensive applications” can mean that the actual software performance of the tool is worse than the test suggests and that the tool is incapable of running USB slot tests too.

Unlike Oculus, which released a minimum specification sheet for its VR headset, Vive doesn’t list any recommended hardware anywhere. The tool is the only way to know if your PC is “Capable” or “Ready” for VR content. However, the tool’s download page does list recommended specifications for it to run on a PC. It recommends that there should be an Intel i5-4590/AMD FX 8350, a GTX970/AMD Radeon R9 290 (or equivalent), and 4GB of RAM. The PC needs to be running Windows 7 SP1, 8.1 or 10.

The SteamVR Performance Test can be downloaded from here.