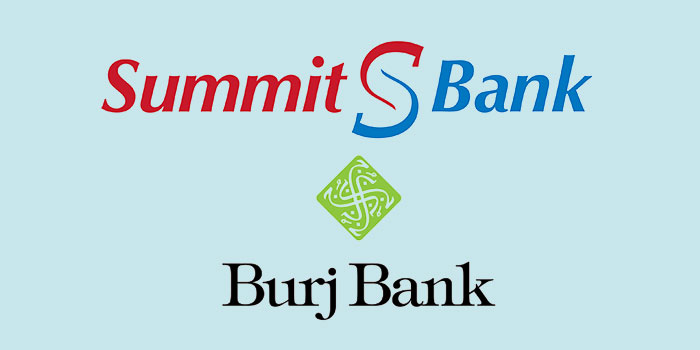 According to official notification issued to Pakistan Stock Exchange, the management of Summit Bank has sought a permission from State Bank of Pakistan (SBP) to acquire majority of shareholding of at least 51 percent in Burj Bank.

The Summit Bank’s management informed its shareholders that it showed its interest in the share purchase deal with Burj Bank, a full-fledged Islamic Bank.

Burj Bank has already entered in talks with the management of Summit Bank although central bank will give green signal to the managements of two banks to formally proceed on this.

It is pertinent to mention here that Burj Bank received a proposal from Bank of Khyber in February 2016, before Summit Bank, which also sought permission of State Bank of Pakistan for due diligence of Islamic Bank.

According to Burj Bank’s plan that’s mentioned in its financial report, bank’s management has engaged with multiple investors, interested to invest in the capital of the Bank.

Last year in 2015, Burj Bank received a proposal from National Bank of Pakistan which conducted its due diligence with the permission of banking regulator but the managements of two banks could not seal any deal on sale and purchase of shares.

In 2014, Burj Bank also received an investment proposal from MCB Bank for purchase of its 55 percent shares but that deal also got stuck due to failure of negotiation between the management of the two banks.

It seems the management of Burj Bank is buying time from the central bank to meet minimum reserve levels and has received extensions from SBP multiple times since 2013.

The SBP has allowed the Bank an extension in meeting the MCR of Rs. 10 billion till September-end 2015 and to maintain the CAR at 23% till such time. But the bank is still on the way as its paid-up capital stands at Rs 5.464 and capital adequacy ratio stands at 18.27 percent by end of September instead of 23 percent.