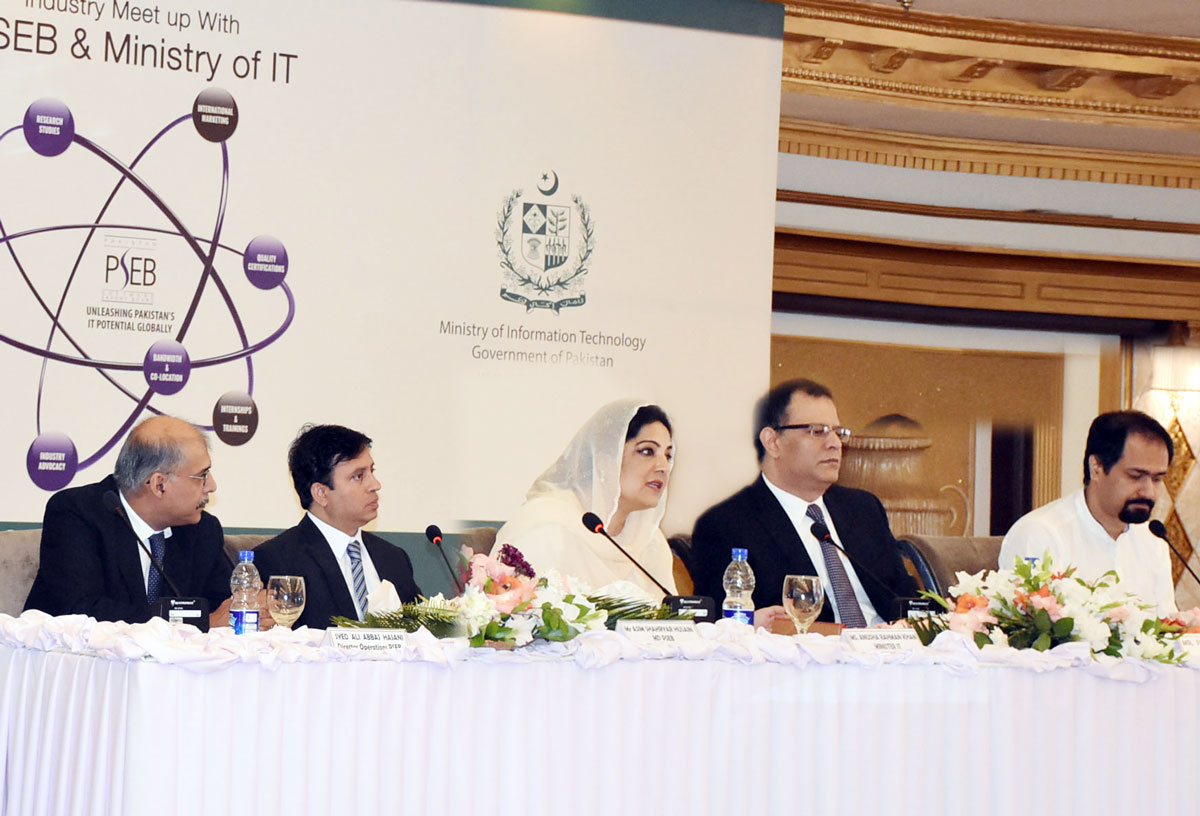 PSEB and Ministry of IT organized a seminar for consultation on draft IT Policy 2016 here in Islamabad today. CEO’s of almost 200 IT Companies participated in the interactive session.

The Minister of State for IT & Telecom Mrs. Anusha Rehman chaired the seminar and addressed all the extensive queries posed by the participants. Member IT Syed Raza Abbas, MD PSEB Mr. Asim Shahryar, Member Legal Ms. Aamena Sohail and other senior officials from MoITT, PSEB and Chairman @Pasha were also present there.

MD PSEB, in his inaugural speech, welcomed the participants and thanked Minister of IT & Telecom Mrs. Anusha Rehman for her generous support and visionary leadership which reinvigorated the whole sector.

Minister for IT & Telecom Mrs. Anusha Rehman, while addressing to the participants of the seminar, stated that government is committed to achieve its vision of accelerated digitization, and all its efforts to materialize this vision.

“We have created an enabling environment for the IT industry and SMEs and large IT companies should come forward to market their products and services internationally to grow IT exports”, said Mrs. Anusha Rehman

IT remittances have grown over 41% since last year. The goal of ministry and PSEB is to take IT exports to more than $5 billion by 2020.

For this purpose, PSEB has planned different support programs including participation in international IT exhibitions with IT companies, local IT events, meetings with foreign IT visitors, CMMI training and certification, capacity building through internships and trainings, and infrastructure in the form of new IT parks.

IT companies should report their foreign remittances under specific state bank’s code so that an accurate picture of IT exports of Pakistan could be aggregated.

The Minister stressed that industry has to reciprocate and collaborate with the government on defining KPIs for the IT sector over the next 5 years such as increase in remittances, foreign direct investment and employment generation so that a solid case can be made for tax exemption on exports to FBR and Ministry of Finance.

She said that IT industry can easily exceed exports of $5 billion over the next five years because of the cost advantage in Pakistan and the big IT talent pool available locally. She focused on the concept of gender balance in the IT industry and mentioned that the ministry has kept a minimum percentage of 30% females in all industry support programs such as internships and trainings to motivate more females to join the IT workforce.

This was followed by a presentation by Member IT, Syed Raza Shah, from ministry of IT who talked about different areas of focus which have been included in the new IT policy including infrastructure development, big data, persons with disabilities, e-services, local language content, IT exports, e-governance, entrepreneurship, legislation, and human resource development. This was followed by a panel discussion with the audience.

The participants/ CEOs of large IT companies termed this interactive session as highly useful learning experience. Minister has directed the PSEB authorities to arrange such more interactive sessions in all other metropolitans/capitals.

PSEB also showed a documentary, it has produced to promote the IT industry of Pakistan which was very much appreciated by the audience.