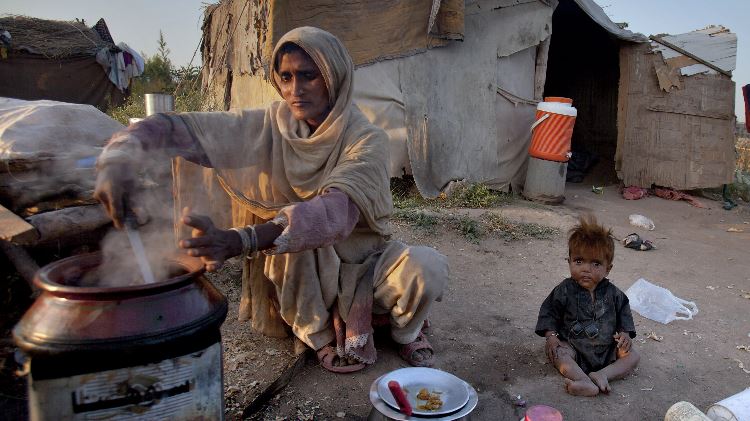 In a country where 200 million people reside and where the government likes to remind us about the financial improvement in Pakistani’s lives, over 60 million people earn less than Rs 2,500 each month.

These stats were revealed in the most recent Household Income and Expenditure Survey.

Based on the aforementioned report, the government is planning to devise a new criteria for what it means to be in a poverty line. The new poverty line will be set at Rs. 3,032 per adult equivalent per month.

Any household income that comes to less than that, which translates to about one-third (29.5%) of the whole country, will be classified as poor.

The poverty threshold will be set at monthly Rs. 3,032 per adult equivalent

The newly-defined poverty line comprises of 6.8 million to 7.6 million households or 53 million to 59 million people.

The Planning Commission’s document states that the new definition will help improve the government’s reach towards low-income households through its policies.

The commission says that resetting the poverty line shows the government’s commitment towards a sustainable and inclusive development path.

According to the commission, most of the developing countries reset their poverty bars when the poverty standard gets as low as it has in Pakistan. Considering this, the government has decided to consider more people as poor by increasing the above-poverty threshold.

The last time a poverty threshold was set in Pakistan, it was during 2001/02. The standard was set after considering the food energy intake method and a reference group.

The group included three bottom quintiles of the distribution expenditure group. Calorie threshold of 2,350 cal per adult equivalent, which is higher than the FAO standard in the region, was also used.

One-third, or 53-59 million people, will be classified as below poverty line.

Over the past decade or so, people have moved from eating cereals and pulses, which are a cheap source for calories, to chicken, meat, eggs and vegetables, which are more expensive. This has led to an overall increase in expenditure per calorie.

This can partially be attributed to a reduction in poverty for some while others have relatively little knowledge of how to change their dietary patterns.

Many secondary and tertiary cities have also sprung up, says the commission’s document. These cities need to better documented in order to capture national data, including their GDP, more accurately.

Such small cities could be a cause of reduction in poverty. The document says the issues need to be examined in more detail to understand the real reasons behind rural economy and poverty.

It’s interesting to see how the government can magically decrease poverty by simply increasing the poverty threshold. If they couldn’t do it for the poor people with lesser incomes, how could increasing the number of poor people possibly alleviate poverty?

The government only seems to be playing with numbers here. If they could do anything, they would have already started reducing taxes, prices, etc. to help the poor. The financial divide between the poor and the rich is becoming greater every day. Simply looking at the average numbers, or changing them, won’t portray the true state of poverty in the country.