With the aim of bringing virtual reality to everyone, AMD has announced its new Radeon RX480 video card. In a move that has got us giddy, AMD has tried to deliver performance that’s equivalent to high-end cards for a mere $199.

Features of the AMD RX480

Based on AMD’s new Polaris architecture, RX480 is capable of more than 5 teraflops of computing power. For comparison, Nvidia’s GTX 1070 produces 6 teraflops for $380, while the high-end GTX 1080 churns out 9 teraflops for $600.

Thanks to 14nm FinFET technology, RX480 consumes only 150W of power. That should make it cooler and quieter than previous generation cards. For comparison, take the Radeon R9 390X that’s built on TSMC 28nm technology, which draws almost double the power (275W). 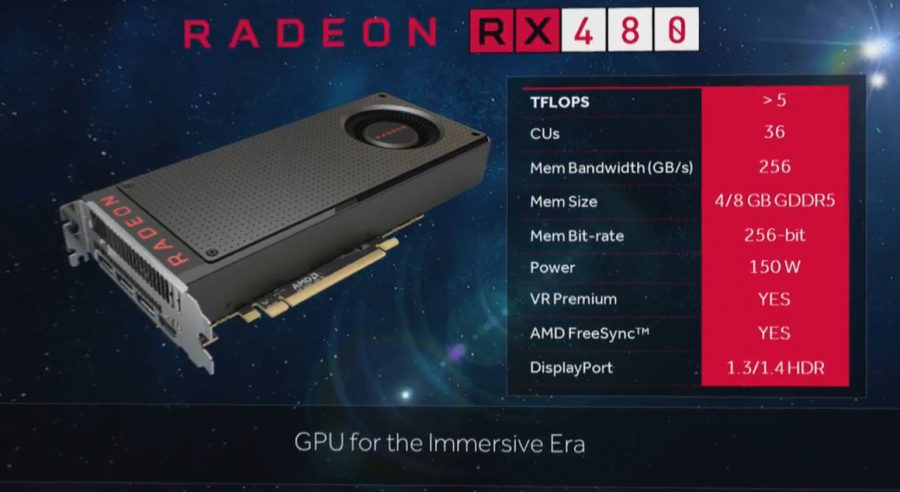 The AMD RX480 will be available in both 4GB and 8GB memory configurations and both models feature 36 compute units (CUs).  It will be equipped with GDDR5 memory and a 256-bit memory bus that will transmit that data at the rate of over 256GB/s.

RX480 comes with support of Displayport 1.3/1.4 and HDR gaming. To smooth out frame rates, AMD’s Freesync Technology support has been added too.

The company also revealed that you can simultaneously run two RX480 units in Crossfire and the arrangement outperforms NVIDIA’s GTX 1080 while playing Ashes of Singularity. That’s a $400 ($200+$200) configuration outperforming a $600 graphics card.

Both HTC Vive and Oculus Rift retail at over $300. By offering the RX480 at $199, AMD has lowered the bar of entry to VR for users. The budget card is expected to jumpstart the growth of the PC VR market.