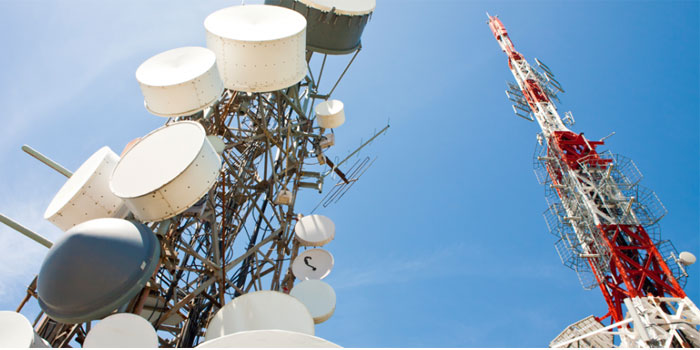 Survey said that decline in revenues could be due to loss of millions of cellular subscribers after Biometric Verification System (BVS) re-verification process and intense competition and low tariffs.

Economic Survey of Pakistan said decline in telecom revenues is in line with the international trend of profitability and revenues in telecom industry.

However, the report said that Pakistan’s telecom industry can improve its revenue generation by expanding their value added services and entering into new avenues of growth such as branchless / mobile financial services and other ICT enabled services in collaboration with other service providers in the economy. 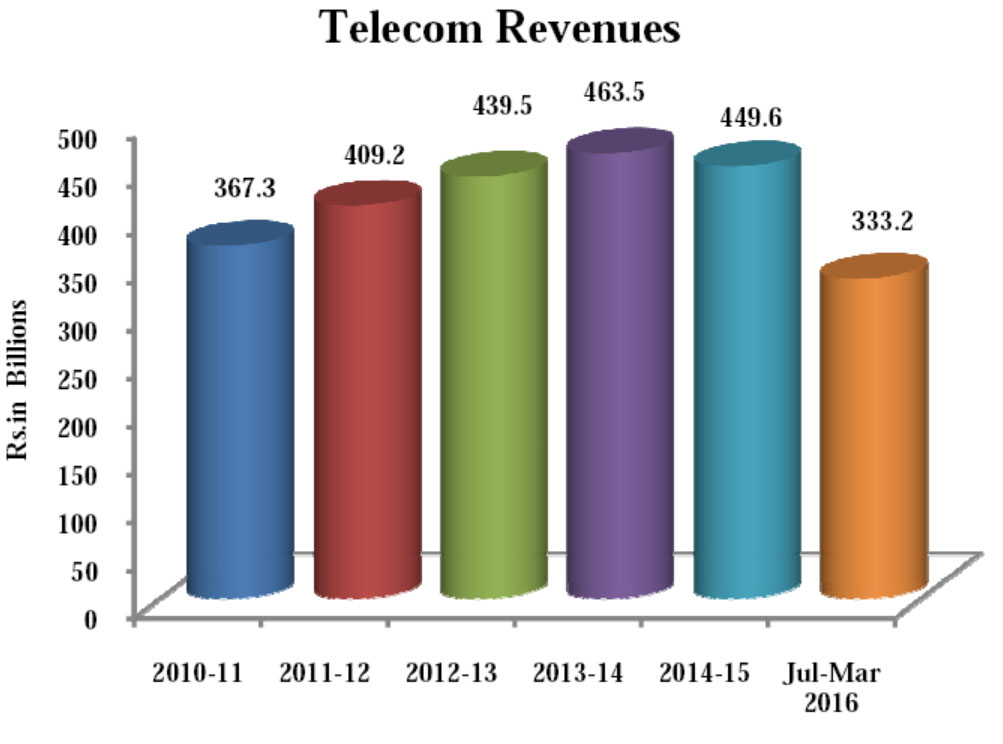 Report didn’t say anything on the impact of increased government taxes on telecom sector.

According to the Survey, during the first three quarters of FY 2016, telecom sector has contributed an estimated Rs. 105.9 billion in the national exchequer in terms of regulatory duties and taxes.

PTA and the telecom industry believes that rationalization of taxes on telecom sector can result into better sector growth and consequently better collections for the government in the long run. 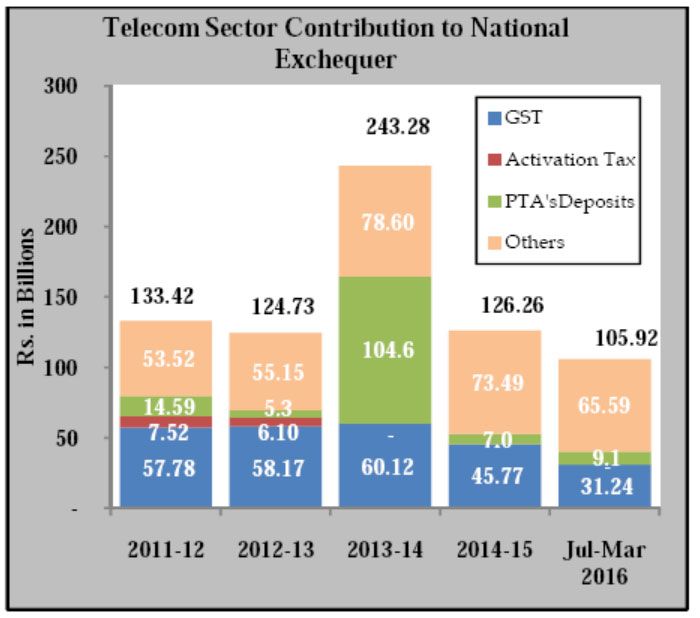 In terms of overall investment in the telecom sector, the momentum started in fiscal year 2013 for the up-gradation of telecom networks for 3G and 4G services has continued.

Telecom operators have invested a significant amount of $ 589 million during July – March, fiscal year 2016. The main driver behind this investment is the cellular mobile sector which has invested $557.3 million during the first three quarters of FY 2016. 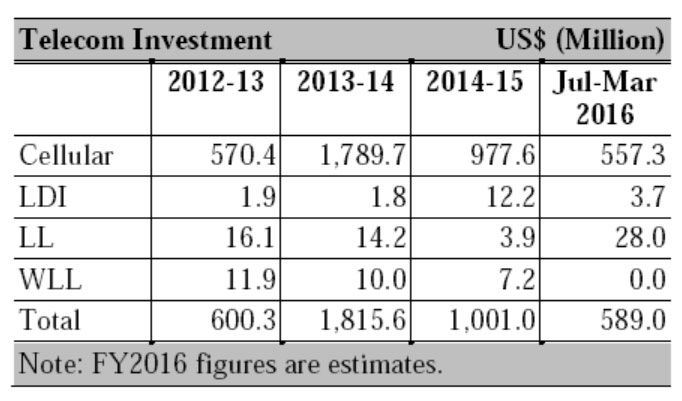 Biometric re verification of SIMs last year had an adverse impact on the cellular subscriber base. However, the industry has survived through the tough period and continues to regain subscribers at a fast pace. It is expected that the rise of mobile broadband will also have a catalytic effect on the SIMs sale.

The number of net subscriber additions in the period stood at 14.10 million.

DSL, WiMAX, EvDO, HFC and FTTH collectively have 3.13 million subscribers at the end of March, 2016. This disparity in subscriber trends highlights the substitution effect of mobile broadband on the other broadband technologies.

In order to further provide impetus to the broadband sector, synergy of various elements is required. Therefore, external factors are also needed to be addressed which include affordability, computer literacy, religious and cultural views regarding objectionable content on internet and lack of local content. 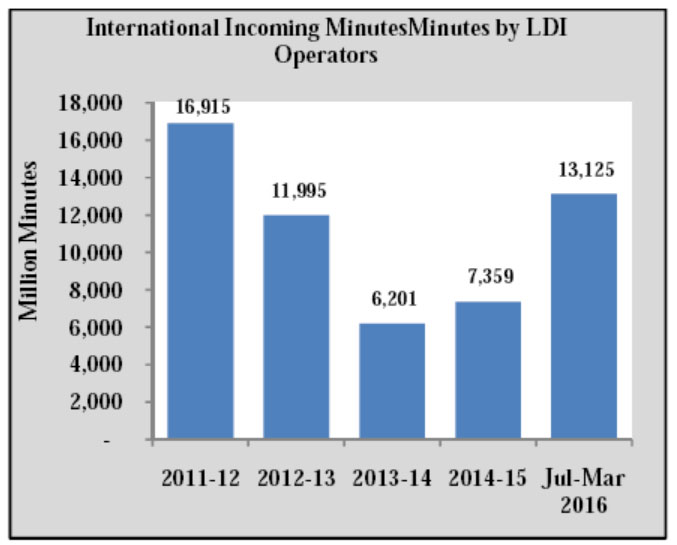 The growth of 158 percent is an encouraging sign for the LDI segment. Breakdown of traffic shows that international incoming minutes have increased remarkably with a total volume of 13,125 million minutes in three quarters of FY 2016 as compared to 4,169 million minutes in the entire previous fiscal year.

On the other hand, total international outgoing traffic minutes dropped by (3.7 percent) during the July-March 2016 as compared to July-March 2015. 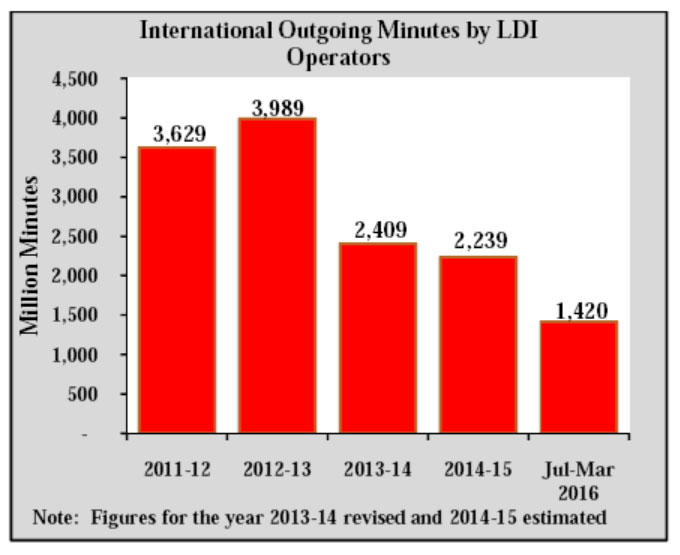 The total international outgoing traffic minutes were reported to be 1,424 million during the July-March 2016 as compared to 1,474 million in the same period of previous year, mainly due to the rising trend in using Over-the top (OTT) services for international calls such as Skype, Whatsapp, Viber, Facetime, Line etc.