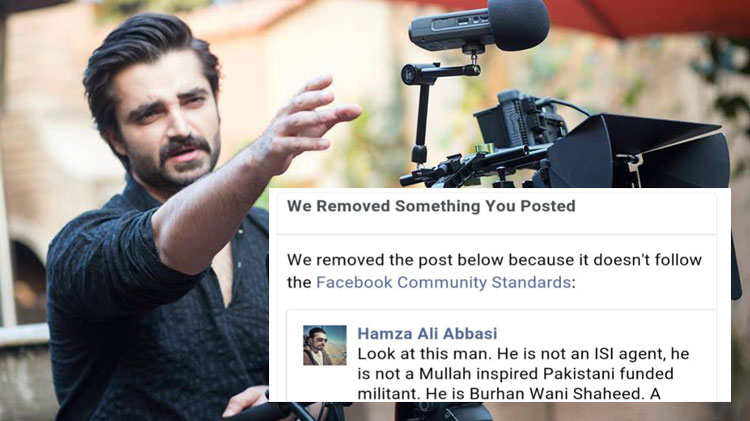 Facebook deactivated Hamza Ali Abbasi, a known showbiz celebrity in Pakistan, for posting an update that supported Burhan Wani, a Kashmiri leader who was recently killed by Indian Army.

“Look at this man. He is not an ISI agent, he is not a Mullah inspired Pakistani funded militant. He is Burhan Wani Shaheed.

A KASHMIRI who joined the freedom struggle of Kashmir when his brother was killed by Indian Army.

If KASHMIR issue is not resolved according to the will of Kashmiris and UN Resolutions, we have another PALESTINE in the making right in our backyard.

It is yet unclear if Facebook removed the post because of Kashmir or Palestine as both words were mentioned in the status.

Shabaash Facebook. Day 10 of Indian crufew in Kashmir, more than 60 martyred & we cant talk about it. #FreeKashmir pic.twitter.com/iwuL3Kbuev

It is also unclear if Facebook removed the post upon complaints, or it took action against the opinion itself.

Not to mention, Hamza’s post didn’t contain any abusive words or racial comments, yet it was removed by Facebook clearly indicating a bias towards what Hamza had to say.

It won’t be out of place to mention that Facebook has previously done the same to Hamza Ali Abbasi when one of his posts on “Freedom of Expressions” was deleted.

Later on Mark Zukerberg had to explain himself that removal of the post was a mistake, and it was finally restored.

Also Read: One Facebook, Two Faces [One is Real Ugly]