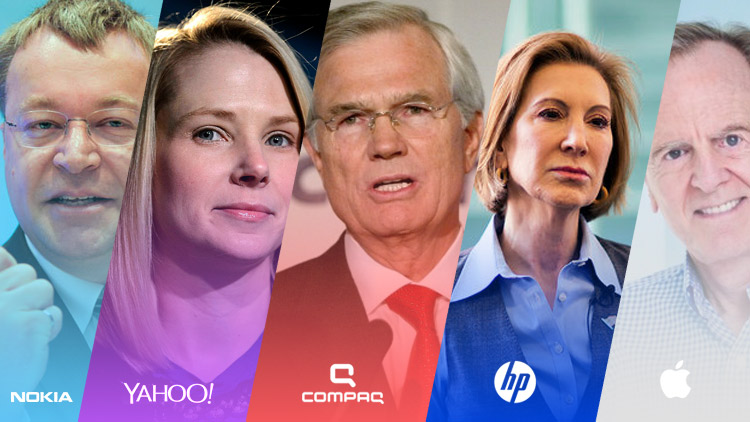 CEO of a company has the highest privileges and authority in the organization. Although, a CEO is not the only one responsible for a company’s success or failure, but being the most authoritative person in the team, their decisions can mean the difference between a resurgence or bamkruptcy.

Today we discuss on the five worst CEOs of all time. These are the five people who ruined multi-billion dollar conglomerates and forced the companies to sell out for several times below their company valuation. 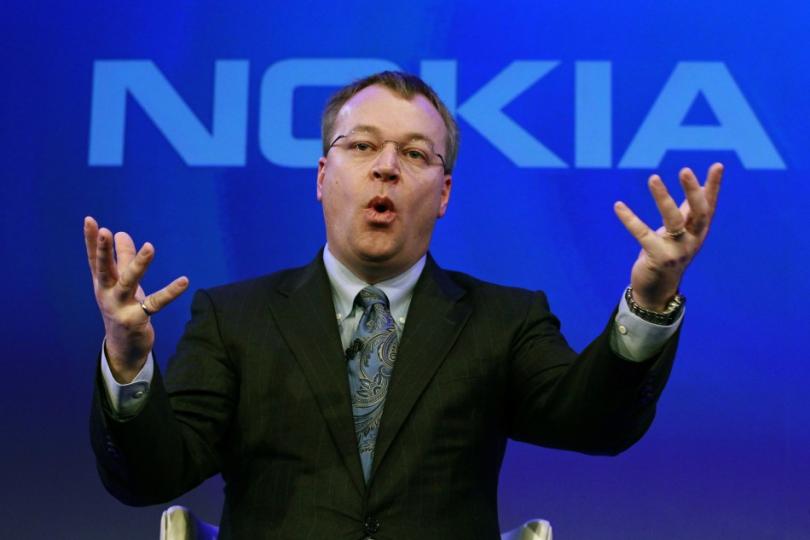 Stephen Elop is sometimes called a Microsoft trojan horse CEO (someone who was put there by Microsoft to work for them instead of Nokia). He has also been called the King of thieves by some of the most prominent tech bloggers. While these are just allegations and anybody would have trouble proving this in the court of law, the timeline of events that happened under his CEO-ship and the rewards he got from Microsoft certainly make the matter very suspicious.

He was a VP at Microsoft before becoming Nokia’s CEO. As far as his leadership is concerned, he single-handedly ruined the world’s best mobile phone manufacturer and guided the company to complete failure. He was pretty good at convincing the board of directors that he was being innovative and differentiating Nokia from the bulk of Android phone manufacturers, but in reality he was only benefiting Microsoft.

Stephen Elop was a stubborn man or maybe he was just being stubborn to assist Microsoft. He used to say that Windows Phone (WP) had the potential to carry Nokia, which was still the world’s biggest phone manufacturer. In his opinion, WP was smoother and Microsoft was a big force which meant WP had to be a success and Nokia would benefit from it.

However, in reality Nokia’s brand name was being used to increase WP’s market share. WP was an incomplete OS, which didn’t even have a copy & paste feature, front camera support or complete MMS support when it launched on Nokia flagships. There were literally less than 100 popular apps on Windows store.

Nokia’s brand name was ruined due to the WP platform and its market share started to decrease rapidly. Despite having the best cameras and build quality, people were preferring other brands because of WP’s immature status.

After joining the platform in September 2010, Elop handed over Nokia to Microsoft for a mere $7.2 billion in 2013. He was the driving force behind Nokia’s sale. In return, he was made the Head of Microsoft Devices Unit which included the Nokia business as well as other Microsoft hardware. He also got $25 million by signing the deal with Microsoft.

Yahoo was one of the oldest search engine providers and a competitor to Google. The company competed with Google for many years before Android and Google’s other ventures left Yahoo in a bad shape. Marissa Mayer was a former Google executive who joined the company in 2012. However, ever since she took over the company’s financial status went from bad to worse.

She hired top executives and later had them removed from the company giving away millions in compensation. Mayer spent $3 billion in a wild buying spree. Out of all the companies that Yahoo bought under her leadership only Tumblr turned out to be slightly successful. Instead of going for Netflix or Snapchat, she acquired 53 other companies during her four years as CEO. She claimed this would bring in talent, however, it only decreased the company’s cash reserves.

The worst part of this was that Yahoo forced all the companies it bought to shut down. Even a newbie strategist would know that it’s better to keep the brand names alive and slowly integrate them with the new owner company. Since they shut down all companies, the acquisitions never made anything in return.

Yahoo’s implied business value became less than zero just before it got sold to Verizon for $4.8 billion a few days ago. For a company, which had such a global business and spent $3 billion on mere purchases, that’s like having it for free. 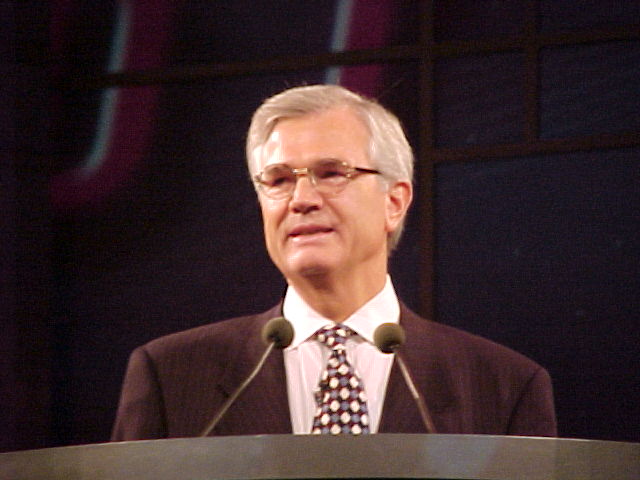 The story of Compaq and Eckhard Pfeiffer is probably the worst thing you could hear in any industry. Pfeiffer was the CEO of Compaq, a company which started in 1982 and was one of the first computer companies in the world. It had the broadest computer line on the market. In 1989 they entered the low-end server market and managed to push Packard Bell and IBM out.

Pfieffer took over the company as CEO in 1991. The company would have done great had it stayed within its core business but Pfieffer had massive expansion plans. In 1997, he bought Tandem, a high-end server manufacturer followed by DEC, the leading mid-frame computer company, in 1998. Pfieffer decisions to expand away from the core business turned out to be bad, especially considering that the expensive brands Compaq had bought, were becoming obsolete anyway. He was unaware of DEC-owned Altavista’s value. It was the original search engine before Google and Yahoo.

As Compaq changed focus to the high-end server market, Dell and Gateway stole the low-end market share, where Compaq used to be the leader. Pfieiffer was sacked in 1998 by the board of directors. The company failed to recover as it was left lagging in the fastest growing PC market segment. Compaq was sold to HP in 2002.

Carly Fiorina may claim that she did wonders for the company, but during her tenure, all HP got was failure, fall and more failure. She made several claims like making more jobs, increasing patents per day and making HP a leader in every market it competes to justify herself for a US Presidency candidate.

She became HP CEO in 1999 and left the company in 2005. By that time, the company had lost half its value and thousands of people lost their jobs. As soon as she became CEO, she announced to acquire Pricewaterhousecoopers for $14 billion. Wall Street wrote against it and she withdrew the deal. Soon after, IBM acquired that division for only $4 billion.

Some time later, she set her eyes on Compaq Computers. HP bought Compaq in 2002 for a massive $19 billion. That decision was controversial from the start as the board members weren’t satisfied, including Walter Hewlett, the son of HP’s co-founder. They said this would dilute the company’s core business, which is office supplies and printers.

They proved to be right as Dell got hold of the highly focused PC market and HP had to lay off 17,000 employees. HP’s revenues continued to decline every quarter since then.

Her term as CEO was best analysed by Carol J. Loomis in a 6,700-word 2005 Fortune cover story titled “Why Carly’s Big Bet Is Failing.” A few weeks after this article was published, HP board of directors fired Fiorina. HP gained almost $3 billion of market value that day after the news was made public. She was only 50 years old back then but has not managed a publicly traded company since then.

John Sculley was made Apple CEO in 1983. He considered Steve Jobs as a rival and that’s one of the reasons he is classed as one of the worst CEOs of all time.

Sculley was hired due to his immense business experience and marketing skills. His experience included heading PepsiCo and he introduced the Pepsi Challenge campaign. Steve Jobs himself forced Scully to leave PepsiCo and join Apple. Apple board thought Sculley would be a great addition to the company which had inexperienced executives like the co-founder Steve Jobs.

Within two years, Sculley convinced the board to remove Jobs from all managerial responsibilities. Jobs also had marketing skills and this posed a threat to Sculley’s position.

He believed in expensive marketing campaigns but he lacked technical knowledge which was needed for a company like Apple. He even launched his pet project Apple Newton which didn’t quite work out. He also ventured into the camera and CD player business which turned out as failures.

John Sculley lost his job in 1993 after bringing Apple down from an emerging giant to a tumbling computer manufacturer. 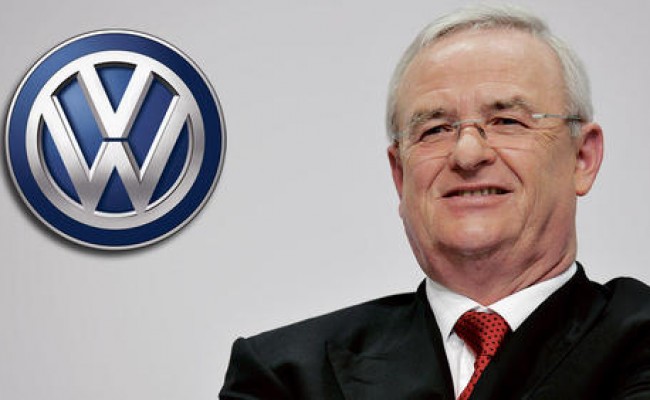 Volkswagen, one of the world’s largest automobile makers, was said to be cheating according to environment officials. Their cars’ software was rigged to display less emission costs in diesel cars. The company later admitted to the allegations and that it was installed in 11 million cars worldwide.

The car manufacturer’s CEO, Martin Winterkorn was allegedly the major culprit. He may have contributed in the unethical and illegal software installation process. Winterkorn admitted responsibility and resigned within the same month that the secret was revealed. However, he outright refused to that he had done anything wrong.

The man, who is known to go around car factories carrying a gauge to measure car body panel distances, was called a perfectionist. It is said that he used to individually call employees to criticise their work had they failed to meet their goals. It is difficult to understand how anyone could have kept such activity hidden from him.

Currently, the German prosecutors are conducting a criminal investigation against Winterkorn and any other VW executives involved in the scandal.