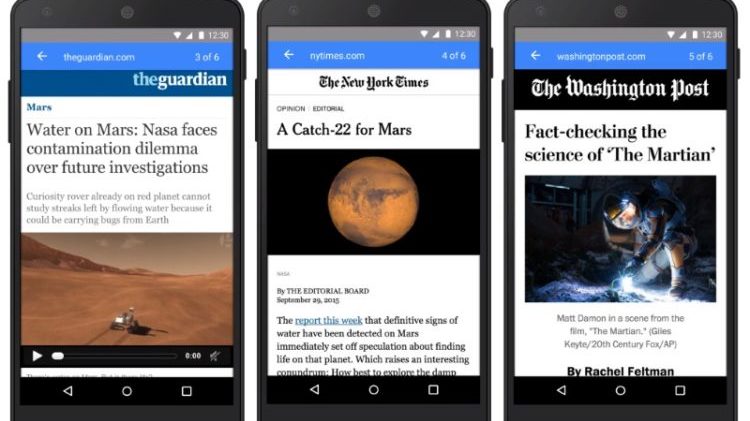 Google will shortly start displaying indexed Accelerated Mobile Pages (AMP) in its mobile search results. The search giant has already released the developer preview and will gradually roll out indexed AMP content on its mobile website and app.

AMP is an open source initiative, akin to Facebook Instant Articles, which will allow publishers to create mobile optimised content once and have the content load instantly everywhere. The technique strips down pages and only consists on important parts leading to a faster loading speed. AMP pages load within one second and consume ten times less data.

How Does AMP Work?

Secondly, it pushes the pages from its own servers which removes publisher server dependency and the user never connects to each and every server which usually slows down page loading speeds.

However, the process isn’t very simple and requires developers to create slimmed down version of their webpages.

Benefits lie with the publishers as well has the users. Users get a faster viewing experience which means they spend more time viewing content and less time waiting for it to load. Users red more, view more, search more and even buy more.

Publishers benefit from the higher search engine rankings as more viewers visit their site. Though Google has said that mobile optimisation through AMP won’t be ranking factor. Website owners will get more users, more views and it won’t go against their bandwidth, reducing load from their servers.

AMP posts will also come with carousal support at the top of the Google search pages.

Since the website pages are stripped down, publishers are concerned about their ad revenues. From what we have seen so far, AMP pages show less number of ads. Although Google says “A goal of the Accelerated Mobile Pages Project is to ensure effective ad monetization on the mobile web while embracing a user-centric approach.”

So despite there being fewer ads, it should not have any negative effect on the ad revenue as AMP will reduce mobile bounce rates balancing out the income rate. However, only after the system has gone mainstream, can we understand whether it helps financially or not.

Expect to start seeing AMP enabled pages in organic search results on Google’s mobile pages. Google already has 150 million AMP indexed web pages and is adding 4 million each week. Unlike Facebook Instant Articles, the search giant plans to get non-news publishers into the mix as well. Many popular websites like eBay, Reddit, TripAdvisor, Disney and many others have already come into the fold.