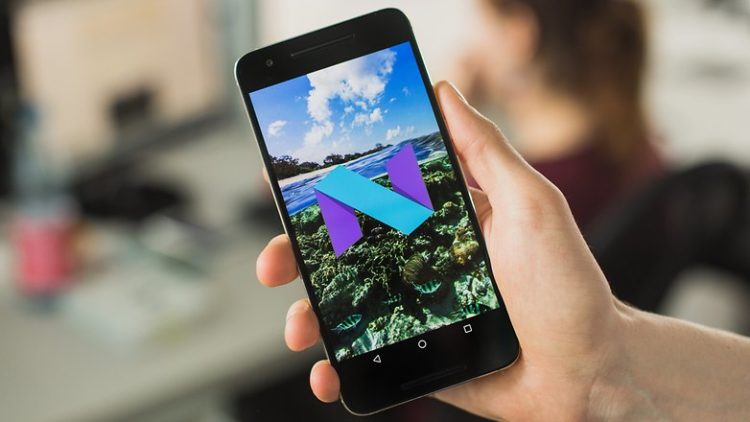 Google has announced its newest Android version, 7.0 aka Nougat. It’s rolling out to compatible Nexus and Android One devices today. It’s good news for those who have those devices but the rest will have to wait for the release from their manufacturers.

As with every new Android version, Nougat also brings various new features. We happened to have an Android One device on which we could install the update. So here is the full feature review of latest version of Android.

Perhaps one of the most anticipated and requested feature is now available. In Nougat, Android apps now gain the ability to be resized. It has been available for a while now on LG, Samsung and Apple devices but Google has now implemented it at a system-level, hoping that its becomes well-supported by all apps.

There are ways you can use to start the multi windows:

The third step requires you to enable this system in the System UI tuner and will not work without it. 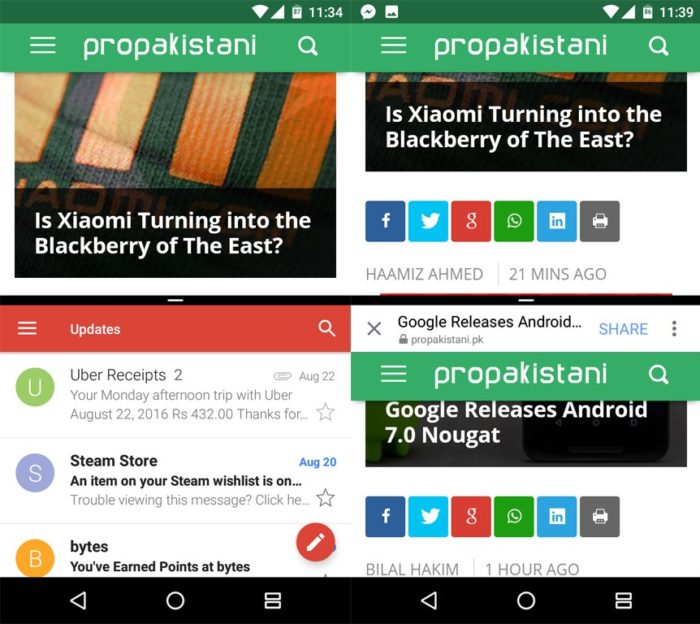 We tested out multi-window, and it seemed to work pretty well. You could use multi-screen for online shopping on Chrome on one window and have the calculator open in another. You can also read a ProPakistani article on one window while reading your emails on another. Or even read ProPakistani articles on both windows, how great is that? The possibilities are endless.

Some apps that were not optimized for multi-windows displayed the message: App may not work with split-screen. But they still worked fine for us and were perfectly usable.

While in the multi-window, if you press the home button the top window will get minimized whereas the the bottom windows will get closed. You will see that the recent apps button will also be split in two and you can tap on it to go back to multi-window. To close multi-window, resize either the top or bottom window to full screen and it will exit the split-screen mode.

Multi-window will be especially useful to tablet users such as the Nexus 9 or the Pixel C but it feels a little cramped on a device that has a screen of 5-inch device or smaller. Usability will improve further as more refinements are made to the multi-window and more apps support it.

The default options you get are WiFi, Bluetooth, Do Not Disturb, Mobile Data and flight mode. Tap on the arrow on the extreme right hand side or swipe down once more to get into quick settings, and you’ll be greeted with a redesigned 3×3 settings toggle. 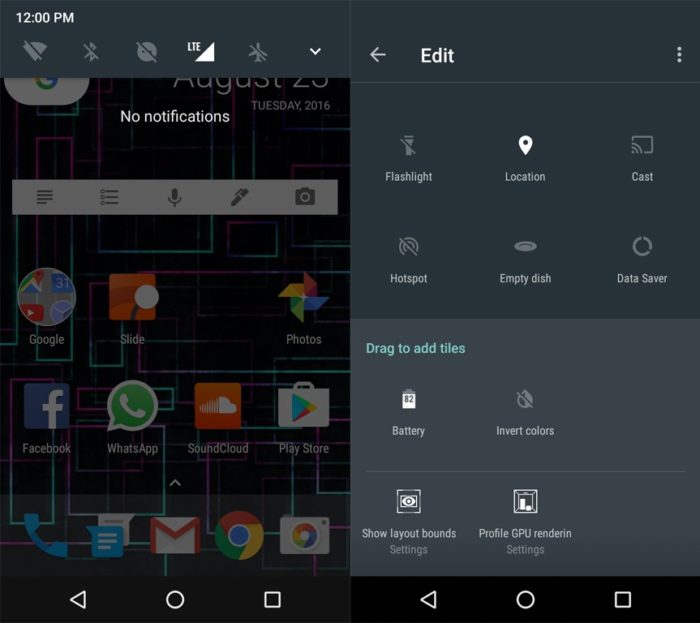 The notifications panel has been completely redesigned and gotten a huge overhaul. The first thing you will notice that is different from Marshmallow is the design. The notifications are no longer cards but now they of full-width on the screen and stacked on top of each other instead of appearing separately as cards.

Have you ever posted something on Facebook, only to have your notification tray fill up with alerts of like and comments? Yea, me neither, but for those of you who do face that problem, Android has solved it by introducing bundled notifications. Now, notifications are stacked in a single notification windows rather than separate ones for each of them. 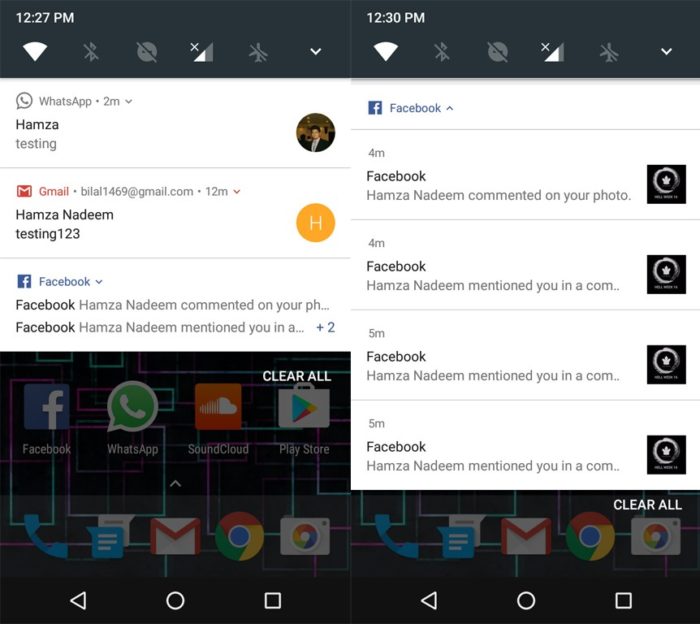 Nougat also enables users to reply to an SMS, WhatsApp message or email etc right from the notifications panel instead of opening the app. The feature was also available in a recent update from WhatsApp but before the update, it opened up a window in the center of the screen. After the implementation of the direct reply, you can just type the message in the notification panel and have it sent.

The new notification area and control is certainly my most favorite part of the new version. It’s good to look at, notifications are neatly stacked and I have more control over each and every app. #MakeNotificationsGreatAgain

Changing the settings panel into something different from what we have been seeing for the past few years seemed like a pretty tough job, but Google has done it nevertheless. The new settings screen has got a lot going on for it.

First off, when you open Settings, you’ll notice a new tab at the top. It’s called the “Suggestions” section. What it does is that it gives you some suggestions to do things like set up a work email address, enabling voice recognition or setting up a lock screen etc. If you do not like this new tab (like me), you can just tap on the three little dots next to it and remove each suggestion individually.

There’s also a bright green bar too above the suggestions panel, as shown in the screenshot, which shows you important suggestions such as turning on or off the Mobile Data or WiFi and even letting you know whether Do Not Disturb mode is on. You can also get rid of it by swiping in either direction.

Clearing those two out of the Settings panel makes things a bit more familiar. But still not quite as familiar as you thought it would be. For starters, the settings panel give you a one line summary about a particular option.

For example, the WiFi panel will show you what network you are connected to, Data Usage will tell you how much data you have used, the Storage option will show you the used internal/external storage etc. In Marshmallow and all previous versions, you had to tap on a panel and dive into the settings in order to view the most basic things.

It is certainly better and saves you time. You also have the option to quickly jump between various settings by swiping right from the left edge, which will open a menu similar to the settings panel.

According to ArsTechnica, the scale of Android’s interface is independent of the resolution and screen size. Manufacturers typically tuned all their phones, regardless of the screen size, which showed roughly the exact same amount of the information.

Previously, this could only be changed through root access but not anymore. In Nougat, the new “Display Size” option will give users the option to choose between three different scales, rather than being stuck with the scale level set by manufacturers.

Swiping through each of apps can get tiring and for some unknown reason a clear all button wasn’t available on any Android version till date. Manufacturers added them on their UI and it was also available on custom ROMs. 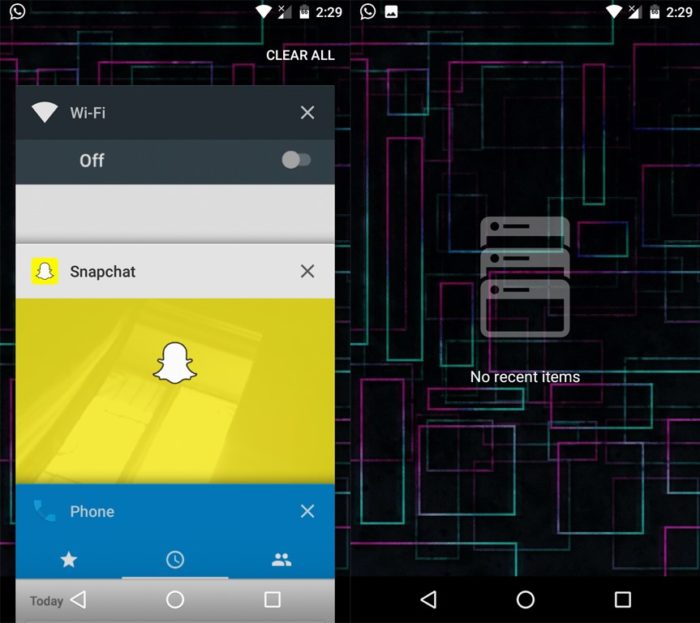 Good news is that the Clear All button is now finally available for Android. It’s still hidden and won’t appear as soon as you tap the recent apps button. You gotta scroll all the way up for it to appear. Tap on it once and it will clear all your recent apps.

The above mentioned features were some of the highlights. Here I will be mentioning some less important features: