We haven’t seen many great or unique tablets lately and this is why Lenovo’s latest attempt at reviving the tablet industry is a breath of fresh air.

Called the Lenovo Yoga Book, it was introduced at IFA 2016 this week and is one of the most interesting tablets to come in recent years. 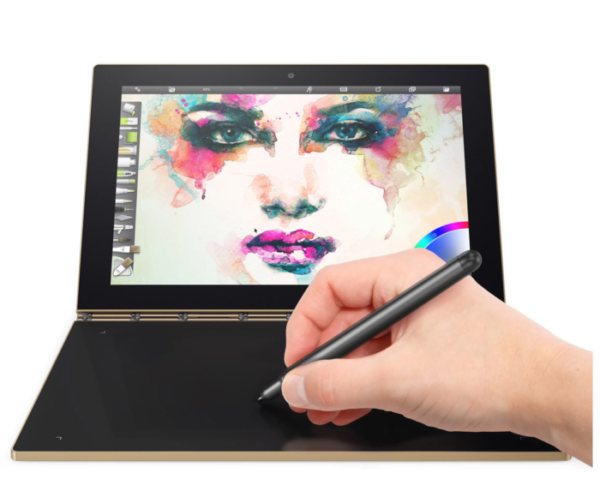 The Lenovo Yoga Book adheres to its name. It comes in the form of a book; two touchpanels (one is the screen the other is a keyboard) joined together with a hinge. It’s essentially a convertible, something that Microsoft has been try to pull off with the Surface since ages. Lenovo even says that it took them three years to make the Yoga Book come to life. 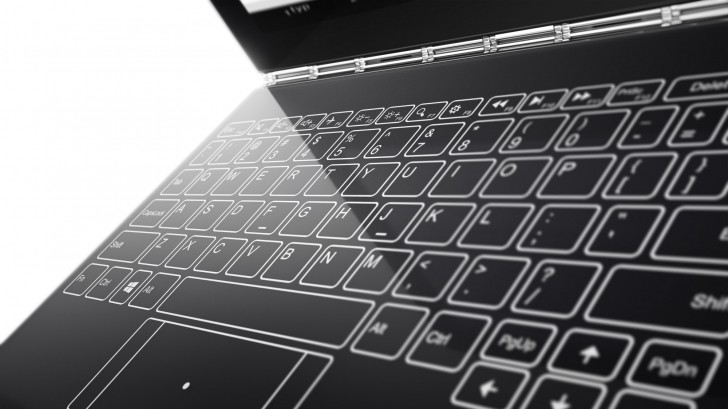 One of the panels is a normal 10.1-inch touch screen while the other is a touch panel that can double up as a keyboard or even a writing pad, thanks to built-in pressure sensitivity. The keyboard, dubbed Halo Keyboard, supports predictive typing, auto correct and auto complete like software keyboards.

You can use the pen, a Wacom stylus sporting 2048 pressure levels and 100 degree angles, that comes with the device to type on the panel just as you would on a normal notebook. It seems surprisingly responsive and can be of huge potential, specially for artists and designers.

More interestingly, the pen also has actual ink. This means that you can simply write or draw anything on a paper or any other book and have the pen transfer that input transfer it all to the tablet in a digital format.

Meanwhile, the hinge can rotate 360 degrees, so you can also fold it to use just the screen as a normal tablet. The device is incredibly sleek too. When closed, it measures just over a 1 cm in thickness.

The Lenovo Yoga Book comes with a quad-core 2.4 GHz Intel Atom x5-Z8550, 4 GB of Ram and 64 GB of internal storage. It will also come in two variants; an Android Marshmallow one which will cost $499 and a Windows 10 version that is priced at $549.

In our opinion, this is the best tablet-cum-laptop currently available in the market considering the price tag. Similar offerings from Microsoft and Apple cost more than two times higher than this and have lesser features.

The Lenovo Yoga Tab 3 Plus is the Chinese company’s newest addition to its tablet line and probably the best one considering the price for performance ratio. If you have been looking for a tablet that beats the Nexus 9 and Xiaomi Mi Pad 2 in this category, you have finally found one.

Binge watching is the focus

This tablet is designed specifically for binge watching TV shows and movies. According to Lenovo, their research into tablet users shows that 76% of people use their tablets in bed. While that may or may not come as a surprise to you, 67% of tablet users use them as a sofa companion and 58% use them at dining tables or desks. This shows the reason why Lenovo specifically targeted binge watching customers. 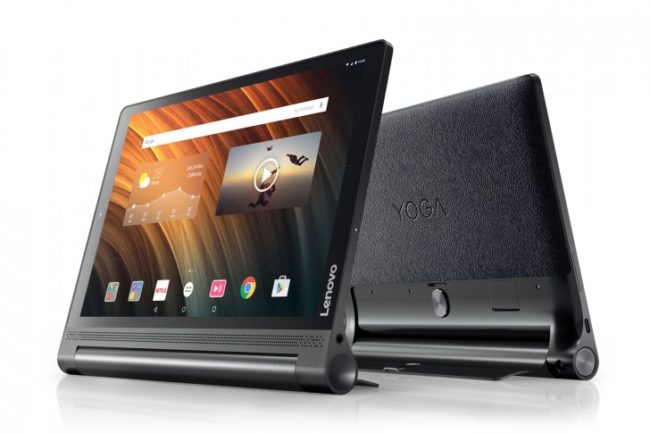 The 3 stage kickstand helps stay the tablet to allow for ease of viewing. You can have it in 3 different orientations with the added ability to hang it somewhere.

It can also stream audio and video to other devices with Miracast and Bluetooth. It is however missing the pico projector included in the Yoga Tab 3 Pro, but considering the targeted price point, we can’t complain.

Water Resistance is a go

Lenovo added water resistance to the Yoga Tab 3 Plus, so if you regularly use a tablet in a wet environment, i.e. kitchen, bathroom etc, you can rest assured it has an IP51 splash resistance certification.

The internals contain a Qualcomm Snapdragon 652 processor with 3 gigabytes of RAM and 32 gigabytes of internal storage. The specs are second only to a Snapdragon 820 powered device, but since no tablet sports one yet, Lenovo’s tablet is one of the most powerful tablets you can get. It also has a microSD card slot supporting upto 256GB of extra storage. USB type-C slot is the main port included in the Yoga Tab 3 Plus.

Cameras are not really a focal point in tablets. Still, the Yoga Tab 3 Plus packs a 13 megapixel back camera and a 5 megapixel front camera. It can record video at 1080p (1920 x 1080) resolution at 30 frames per second.

The price for this tablet is not as high as the iPads and Surfaces out there. It costs a mere $300 and will be available internationally from October.