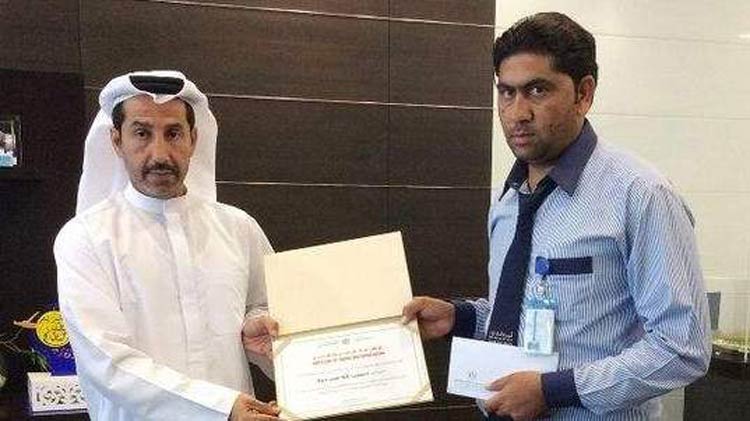 A Pakistani taxi driver who works in Sharjah has been in the news for all the right reasons.

He returned a suitcase belonging to a passenger which contained at least 1.7 million UAE dirhams and some important documents to its rightful owner.

For his conscientious action, Naseeb Ullah Sher Dhola, the Pakistani driver, was honored by the Sharjah Roads and Transport Authority (SRTA).

The suitcase belonged to a Korean merchant who had mistakenly left it in the car.

The SRTA applauded the driver after he alerted the RTA transport office at the airport, which promptly notified the Sharjah Police.

The item was soon returned to its owner and Naseeb won much appreciation from the community and the official authorities for his act of honesty.

“The cabbie has been declared role model for his counterparts, and presented with appreciation certificates and cash prizes,” – Abdulaziz Al Jarwan, Director of SRTA for Transport Affairs

Abdulaziz also mentioned how the SRTA has found 300 such cases of items being returned to their owners. As an incentive the transport authority regularly rewards honest and dedicated drivers with cash prizes and appreciation certificates.

Under the Shukran scheme, some 265 taxi drivers were honored last month, with Dh310,000 in cash rewards and gifts offered to them for their honesty and service. In fact, they also give drivers the chance to clear their black points with white ones if they have previously committed a traffic violation.

“Passengers would better keep the receipt, and remember the colour of the taxi and driver’s uniform as every company has a distinct color.” – Abdulaziz’s advice for passengers who lose their items.

Seeing the increasing spate of incidents regarding lost items, the RTA has installed special sensors in taxis that let passengers be reminded to take their belongings before they get off from the taxi. These sensors are present in 5,200 taxis in Sharjah, currently undergoing a trial run.

But at the end of the day, where technology fails, humanity has to triumph. And for one day, Naseeb Ullah Sher Dholah demonstrated just that.