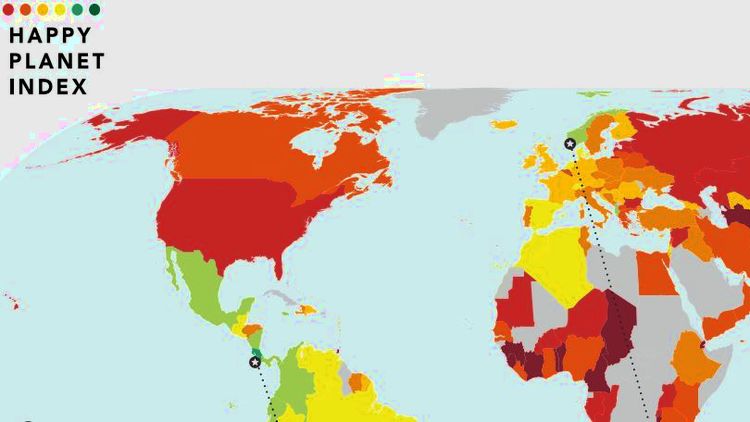 Happy Planet Index 2016 has been released by the New Economic Foundation (NEF). The index ranks Pakistan at 36th out of 140 countries and well above several welfare states around the world. Pakistan is even ranked amongst the top in some sub-categories.

New Economic Foundation (NEF) is a UK-based organisation which works on promoting social, economic and environmental justice. The think tank aims to revolutionize world economy in such a manner that sustainability, fairness, stability and happiness can be increased. This is something which, NEF claims, is missing from even the richest countries of the world.

The Happy Planet Index (HPI) is a ranking system to list countries based on their sustainability and well-being if their citizens. Some of the most wealthy countries rank quite low in the HPI, instead countries from the third world take the top spots where it matters the most.

The HPI provides a direction to countries that it is possible to live good lives without damaging our planet. The ranking is based on four basic criterion; wellbeing of the citizens and their satisfaction (based on Gallup data), life expectancy of a person in a specific country (based on UN data), inequality of outcomes in terms of citizens’ happiness and the length of their lives, and the impact that each resident of a country has on the environment (based on Global Footprint Network data).

Other factors such a per capita GDP, Gini index (a measurement of the difference between the rich and the poor) and countries’ populations were also considered for the rankings.

The ranking’s results reveal that many countries are delivering long happy lives to their citizens while staying within environmental limits. The Asia Pacific and Latin American regions lead the way while some of the wealthiest countries are ranked very low.

Pakistan comes out 36th out of the 140 ranked countries with HPI score of 31.5. Life expectancy in Pakistan is stated as 65.7 years, which rates 102nd in the world, while Wellbeing rating gets 5.1 out of 10, 78th out of all countries. Inequality index got a pretty low 40%, 120th in the world. However, in terms of Ecological Footprint, Pakistan come out 3rd out of 140 with a rating of only 0.8 global hectares per person.

Pakistanis have a GDP per capita of about $1,000 per annum while the population Is listed as 177.4 million. There was no Gini data available for Pakistan so that wasn’t considered.

As mentioned before, global rankings are topped by Asian and Latin American countries. Costa Rica tops the charts with an HPI score of 44.7 followed by Mexico, Colombia, Vanuatu and Vietnam. Check out the top 15 countries below: 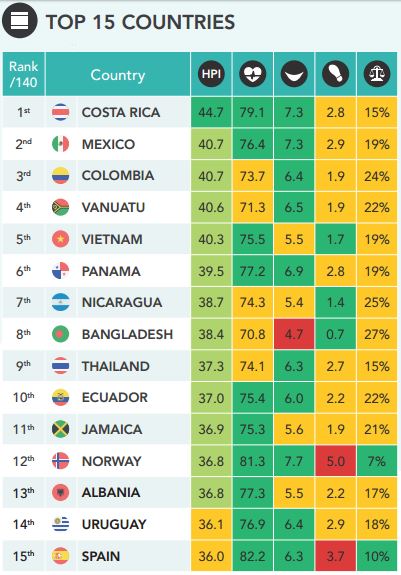 Switzerland tops the Wellbeing category with 7.8, Hong Kong tops the Life Expectancy category with 83.6 years, Netherlands tops the Inequality rating with a ratio of 4%, and Haiti tops the Ecological Footprint category with 0.6 gHA.

Australia is ranked 105th while USA is ranked at 108th. As evident from the numbers, there’s still huge room for improvement especially for more wealthy countries which have been ranked pretty low mostly because of their poor ecological footprints on the planet.