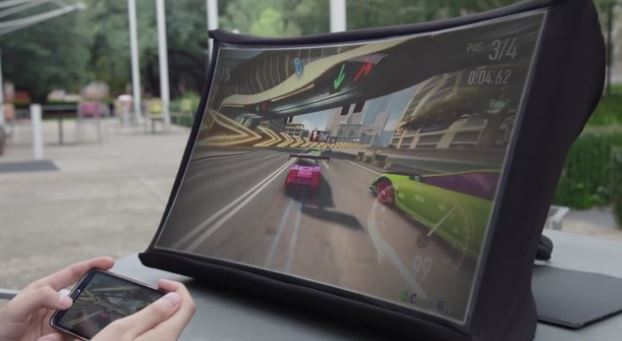 Smartphones are portable and easy to carry around and yet we still prefer full-scale HD LED and TV display for entertainment. What if there was a portable, foldable display with HD picture quality that you could still carry around in a bag?

Meet the Spontaneous Pop-Up Display, or SPUD for short! The SPUD is one of the most interesting and unique projects to come from Kickstarter in recent memory. It promises wide screen entertainment but without compromising on the portability factor.

Initially looking for a $30,000 funding goal on Kickstarter, it has collected a whopping $229,551 with 42 days still to go. The startup behind this Kickstarter project, Arovia, is advertising it is the “world’s first large AND portable display”.

“SPUD is a high resolution 24-inch screen that collapses & expands like an umbrella.”

The SPUD weighs just under two pounds and looks just like a folded umbrella when deflated. Open it up and it transforms in to a 24-inch oddly-shaped monitor. In principal, it is closer to a projector than a traditional monitor.

Unlike traditional displays, it uses a custom optics combined with a Digital Light Processing technology to produce a sharp and bright image.

On the back, there are HDMI and USB for plugging in your laptop or your smartphone. SPUD also supports a range of streaming devices including Chromecast and ROKU. The internal batteries are capable of lasting for around three hours on full brightness.

Arovia is proposing it as a way to play games from your smartphone, or as a second-screen for a normal workstation or for giving presentations.

Shipping is available anywhere in the world, including Pakistan, for around $39 (four thousand rupees).