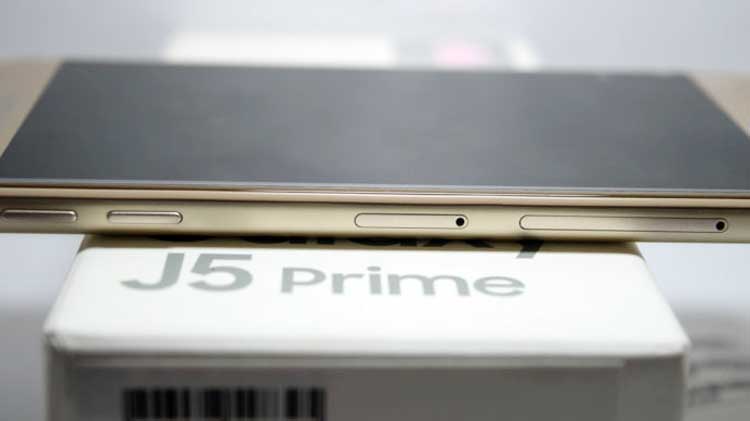 Samsung seems to be improving their mid-range offerings by introducing metal body and a more premium feel for their new line of phones. The newly announced J5 Prime is no exception. The phone offers premium metal build, a fingerprint scanner and improved performance – all for a very good price.

Let’s get on with the unboxing experience and the first impressions of the J5 Prime.

The phone comes with a pretty simple box. You have the name of the phone on the front and some of the specs listed on the back.

To unbox the phone, just open the flaps and pull the tab on top to reveal the phone, wrapped in plastic, on its tray.

Apart from the phone, you’ll find a couple of standard accessories in the box too which include:

Whether you’re coming from the older J5 or from any other phone, the first thing that you will notice is the metal build of the phone.

It is a nice change from the cheap plastic used in earlier models and it is also good to see that even mid-range phones are getting the metal body treatment from Samsung.

The J5 Prime uses a 5.0-inch display having a resolution of 720×1280. Some may complain of the lower resolution but in my opinion, a HD display on a display of 5-inch or smaller is more than enough.

Nevertheless, a higher resolution display would have been preferred at this price range.

On top of the display, you have your usual sensors, earpiece, 5MP front facing camera and a notification LED. At the bottom you have the back and recent capacitive buttons and of course the home button which also doubles as a fingerprint scanner now.

On the left side of the phone you have the volume buttons, the dual-SIM tray and a dedicated memory card slot. And the right side of the phone houses the power button and the loud speaker. All the buttons are made of metal and are nice and clicky.

On the bottom of the phone you’ll find the microUSB port for charging/syncing, primary microphone and the 3.5mm headphone jack.

You’ll find the 13MP camera on the back of the phone along with a single LED flash. The rest of the back is clean except for the Samsung and Duos branding and some regulatory information printed on it.

The processor pushing everything around the phone is a quad-core 1.4GHz one. Backing it all up is 2GB of RAM along with 16GB of internal storage which is expandable by 256GB via a microSD card. Powering everything in the phone is a not-so-impressive 2,400mAh non-removable battery.

Only time will tell how the J5 Prime performs over time. Stay tuned to read the full review of the J5 Prime which is coming out soon.

If you have any questions, drop them in the comment section below and I’ll try to answer them here or in the full review.