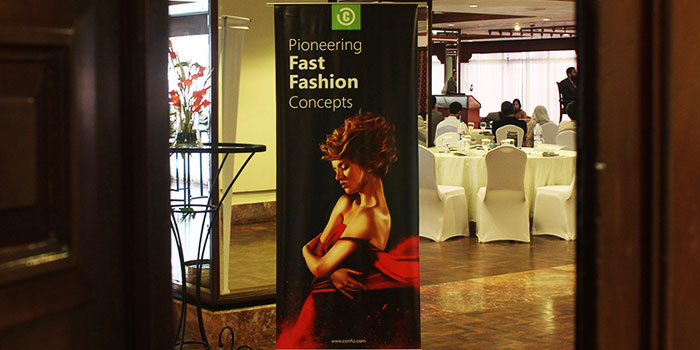 Last week, Confiz, a technology solutions company, brought together the retail industry. experts and enthusiasts for the ‘Concept to Store: Industry Transition to Excellence’ event.

Sponsored by Microsoft Pakistan, it centered around two panel discussions and a keynote address by Theo Doelman and focused on analyzing the challenges, opportunities and potential of the retail industry in Pakistan.

Challenges Faced by Retailers in Pakistan

Things were kicked off by Usman Barkat, VP Industry Solutions, Confiz, who discussed the common challenges faced by local retailers.  While almost everyone wants to emulate the Amazon’s and Zara’s of the world, the reality is that local retailers are eons behind them.

Some challenges like access to timely actionable information, quality control, poor management and lack of accountability at department levels are common across industries, while others are particularly severe for specific industries. For instance, the average lead for apparel and footwear companies is 11 months while the industry standard is roughly 6 months. This compounds the difficulty of running a business that’s growing increasingly fast paced and complex each day.

In a hyper=connected world, brands have to tell a cohesive story. Omni-channel is ensuring the continuity of a customer’s brand experience across all mediums whether it’s in-store, across billboards, or social media and online.

While acknowledging the potential of Omni-channel, Mr. Shirazi was of the opinion that most local retailers simply weren’t ready for it. Talking about the fashion industry, he said that with shortened product lives, the lead times have become larger than actual time they’re on sale and this represented a paradigm shift.

“The industry has moved on from universal to local to personal assortment. Yet here, not even the floor and system inventories match. Some retailers don’t even do universal assortment effectively, let alone multi-channel and Omni-channel. They simply aren’t ready for it. Investments in physical supply chains have gone up and the data is there but businesses aren’t agile enough to take advantage of it”, he added.

Adding his support behind the assertion that customer behavior had changed radically over the last few years, Mr. Shahnawaz said that Ecommerce had been the core driver behind changing preferences. ”Customers have gone from impulsive to rational buying so retailers have to evolve by measuring relevant data and getting something actionable out of it,” he added.

Mr Moshin stated that while some form of Omni-channel has started appearing specially among the top tier brands, there is time before it becomes commonplace although Ecommerce will surely boost its adoption. He added that while it’s logical to look towards Western markets for gauging what might work in Pakistan, there’s a need to localize solutions instead of blindly copying them.

Mr Siddique concluded the panel by talking a bit about Stylo’s efforts at creating a system where every customer interaction is logged and mentioned that the company was already the largest in terms of capturing footfall data. So Omni-channel, at least at Stylo, is well underway.

The second panel discussion was about the industry’s trend towards increasing the number of seasons and how it has affected assortment breadth. The panelists included:

Mr Chaudhry talked about how the recent Black Friday was a testament to the potential of the market. It brought unprecedented traffic both online and in brick and mortar stores and the trend is only going to increase over the next 10-15 years.  “Seasons have evolved due to small events like valentines and that’s led to an increase in the number of collections. This has increased residue inventory too. The data is there but the understanding to use that information to improve processes still isn’t there,” he added.

Mr Shafi said that the change in the industry was competition driven alongside increased customer appetite. This has lead to an increase in variety, seasons etc. “It’s an upward spiral and it is not sustainable. The pressure will grow and will force inefficient players out of the market.”

“The difficulty of operating a business is increasing and the reversal will start sooner or later. Here, readiness will be the distinguishing factor among retailers. The mindset, processes, everything has to change to deal with this,” Mr Shafi concluded.

Mr Khwaja said that handling this change in consumer behavior was the biggest challenge. “Retailers simply cannot sustain repeated discounts, offerings and sales. Margins are growing ever thinner and consumer expectations are rising.”

“This need for ‘newness’ is also affecting order size and how we deal with the supply chain. The solution, in my opinion, is to have a data driven supply chain and someone to make sense of it.”

Mr Chaudhry agreed that ‘deciding how to much to engage in the rat race’ was an extremely important decision for every company and emphasized the importance of human resources for retailers. “Competition and that fast paced industry has resulted in companies investing time and effort on employees only for them to be seduced by increased salaries. Keeping them happy and productive is a huge challenge”, he said.

“There’s a lack of quality human resources and the dearth will probably continue over the next decade. The complexity of the business has increased massively. So core drivers for your growth have to be identified and focused on. The rest should be delegated. This gives you a clarity of thought you need to grow your business,” said Mr Akhtar as he concluded the panel.

The keynote of the event was by Theo Doelman of K3 Retail. He introduced ax|is fashion, which is an end to end solution for the apparel and fashion industry.

A ‘concept to consumer’ solution, it is embedded in Microsoft Dynamics 365 for Operations and further enhanced to meet the needs of the fashion and apparel industry.

Salient features of the software include:

He gave a demo of the software and encouraged interested retailers to request personalized demos so that they could learn how to supercharge their business with ax|is fashion/, Confiz is the official partner for Pakistani retailers interested in deploying k3 is fashion.

Confiz continues to capitalize on technology trends, and leverage their deep subject matter expertise as well as insights of the retail industry, to deliver exceptional customer experiences. With their workforce productivity and store optimization solutions, Confiz is leading the digital transformation game not only in Pakistan but at a global scale.