Google and Facebook, two of the biggest technology behemoths in this world, rely on digital advertising as their one major source of revenue. A new online study details how the two companies control this multi-billion dollar industry.

Google is basically known as the face of the internet, attracting billions of search queries every day. Facebook, with over one and a half billion users, is the internet’s very own social hub.

While both provide their services to everyone for free, they also pull in billions of dollars worth of revenue by using the users’ data to serve them ads most relevant to their interests.

“Digital advertising is expected to pass television to become the largest ad market in existence in the next few years.”

Together, the two companies are operating a duopoly in digital ad marketing. They control a whopping 57.6% of the entire digital ad market and, worryingly, their share is only getting bigger with time.

Google, still the king of digital advertising, controls 41% of the market, followed by Facebook at 16.6%. Microsoft is far behind with 3.8%, followed by Yahoo, Twitter, Verizon, Amazon, etc. 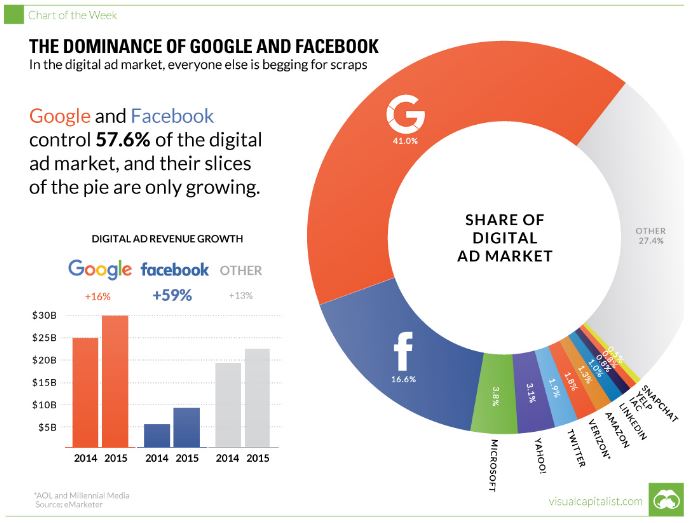 The even more astounding thing is the pace at which their share has increased. On an year over year basis, Google increased its market share over 16% while Facebook nearly doubled it with a 59% increase.

While Google and Facebook have thrived, other iconic brands like the New York Times have failed to capitalize on the digital advertising boom. NYT makes just $200 million per year; a drop in the ocean compared to billions earned by these two every quarter.

Considering the last few decades, companies in technology have very quick rise and fall periods. It remains to be seen if these two advertising giants can maintain their dominance in this field.