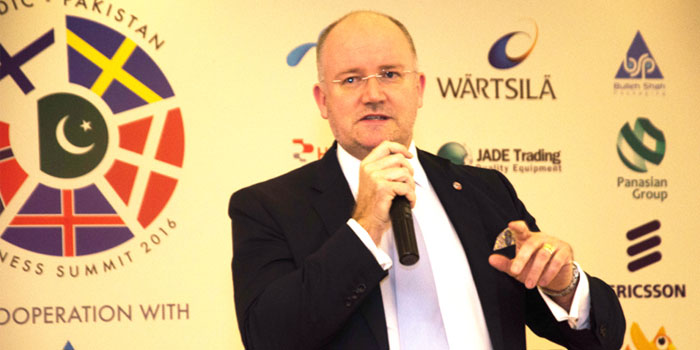 Mr. Wille Eerola has been working for over a decade to help the world see the real Pakistan and his efforts have culminated into closer business ties, higher trade activity and collaborations between the Nordic regions (Finland in particular) and Pakistan.

Earlier this year, he was nominated as the Honorary Consul General of Pakistan for Finland in recognition of his efforts for promoting Pakistani businesses in Finland.

We got a chance to sit down with Mr. Eerola and talk about business, education, energy and much more.

Q. What potential do you see for Pakistani businessmen in Nordic region especially in Finland?

Wille Eerola: Most Pakistani businesses focus on China, the UK and major European countries like France and Germany and they aren’t aware of the opportunities offered by the Nordic region. Take all of the Nordic countries and the 30 million that live within them and multiply it by the GDP per head which is around $40-45,000 per year. There’s your potential. You also have to keep in mind that Nordic countries have higher purchasing power.

So there is ample potential to be tapped and while there are hundreds of Pakistani companies working in the Nordic region right now, much more can be done and the IT industry in particular has to drive that.

Q. Tell us about the Finland-Pakistan Business Summit and its evolution over the last few years?

Wille Eerola: While it was established much earlier, the Finland-Pakistan Business Summit has been working more actively since 2014. Businesses from all industries have participated.

I believe that the only way to truly break the poor perception of Pakistan is for Finnish companies to come and see the work being done in Pakistan with their own eyes. The Pakistan Business Summit helps us do that. So far, 200 companies have joined us and we’ve brought 80 Finnish and Nordic companies to Pakistan resulting in concrete business being done. In fact, it has now become the biggest ever trade promotion in Pakistan.

As a result of our efforts, Finnish exports to Pakistan have tripled in the last three years. An important thing is trade balance and that’s what I’m focusing on improving so it’s a profitable partnership for Pakistan as well. My next target is to double the current €800 million a year Pakistani exports to Nordic countries.

Q. Let’s talk education. What are the 3 key points Pakistan should address if its to emulate the Finnish education system?

Wille Eerola: The Finnish education system has been among the best in the world for years now and you simply can’t copy that and implement it here. However, you can learn from it.

The first key point would be how the teachers are trained here. Secondly, you have to ensure that the teaching profession is an attractive one. For instance, Finnish teachers are paid well. have numerous benefits and the competition for places is intense. Third but certainly not last, it requires a mindset change. Professions other than popular ones like engineering or medicine exist.

Regarding the first point, this is something we’re also doing on a very concrete level. We’re conducting the first private training of teachers in Karachi starting from next March.

Lastly, I want to stress that the whole system should provide a uniform education to every child regardless of background. That’s the only way for it to work. If a country like Finland with 5 million people can create Nokia, just imagine what Pakistan could do with 200 million people if the roots for a solid educational system are put in place. We could even see results in as little as 25 years.

Q. Let’s pivot to energy, which is one of most pressing issues facing Pakistan. How can Finland help?

Wille Eerola: Pakistan could be among the first developing countries to be powered by 100% renewable energy. If I were in a position of power here, I would hire a team of experts from the Scandinavian countries and ask them to make a plan with milestones dictating what needs to happen in 5 years, 10 years and so on in terms of sustainable energy. Another factor is upgrading the grid. Right now if you suddenly fulfill the energy deficit, your transmission grid wouldn’t be able to handle it.The energy experts to do this sort of planning are available in Scandanavian countries but it’s all a matter of intent.

Hydro-power is particularly interesting in Pakistan since some of the biggest rivers in the world flow through this country. With some clever thinking, northern Pakistan could become the Norway of sustainable energy in this region. This is not overly complicated stuff. Again, it comes down to intent.

Recently, a Finnish company alongside NUST completed a project for mapping the potential of bioenergy in Pakistan so some work is being done along these lines.

Q. Do you think that the government has been receptive enough to these ideas?

Wille Eerola: They could always be more open. One of the problems I see in developing countries is that they don’t see the long term potential of an investment. So for example, if I bring in a proposal for hybrid or solar power plant, they’ve already decided on what they’ll pay for that electricity. And if it’s being generated cheaper via a clearly unsustainable coal plant, they’ll go with that even if the hybrid plant pays itself off in two decades. Unless you plan for the long term, sustainable energy will have trouble gaining traction.

In a lot of countries like Pakistan, the energy becomes a political issue and that’ll happen in 2018 as well. Unfortunately, that directly affects how receptive the people in power are to such proposals.

Q. What are the top areas that have the most potential when it comes to business between Pakistan and Finland?

Wille Eerola: Energy for sure and clean technology in particular. IT is also a rapid growth area. For the younger generations though, the world is much smaller and so much can be done. You should go to Nordic countries and make use of trade shows and exhibitions. Show those people what you can do. Grow your business and improve your country’s image alongside it.

Q. How do you see bilateral business relationships between Pakistan and Finland growing in light of these initiatives?

Wille Eerola: They’ll grow in the right direction and that’s the aim behind all the work we are doing. We don’t deal a lot with the governments because I believe change will be driven by the people themselves. Business is the absolute best way for Pakistani-Finnish relationship to blossom. Hopefully our work will inspire a better government-to-government as well but even if it doesn’t, I foresee the business ties growing much much stronger over the coming years.

Mr Eerola has certainly given Pakistani entrepreneurs and policy makers a lot of food for thought. His in-depth interview has touched upon all the ways that Nordic companies and Pakistani businesses can foster a mutually beneficial relationship. We hope that those in power take careful note.