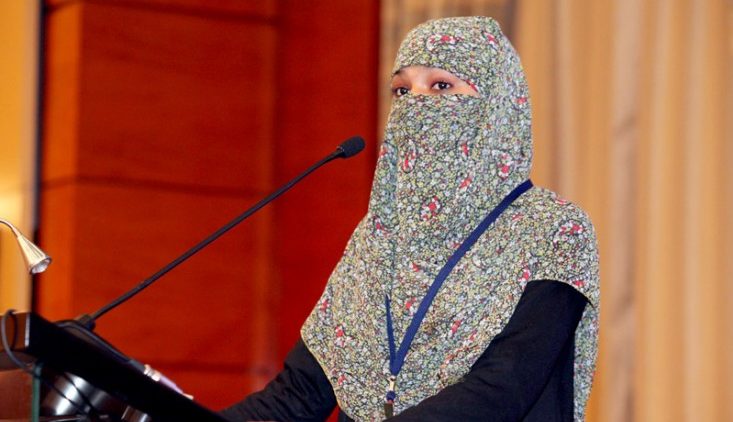 They say that one’s ambitions are a strange thing. There are some people who, no matter what background they come from, cannot be deterred from reaching out to the stars and grasping the very ends of the cosmos.

This is one such story of a girl who lived in a slum in Ismail Goth. And who, despite the challenges she faced, enrolled in a Harvard Program and much more.

The Tale of Anum Fatima

Meet Anum Fatima, a humble girl who used to reside in a local slum. Her tale proves that nothing is impossible for women, baring their own unwillingness that keeps them from achieving their dreams.

Through sheer determination and hard work, she has crawled out from a life of desolation, and into a place of endless possibilities.

Hailing from the slums of Ismail Goth, Anum took destiny by its horns and pursued an educational journey that would lead her to the gateways of one of the most prestigious institutions in the world. Her keen interest in educating herself led her into the care of The Citizens Foundation (TCF), a nonprofit organization, working for the education of the underprivileged in the lesser known areas of the state. 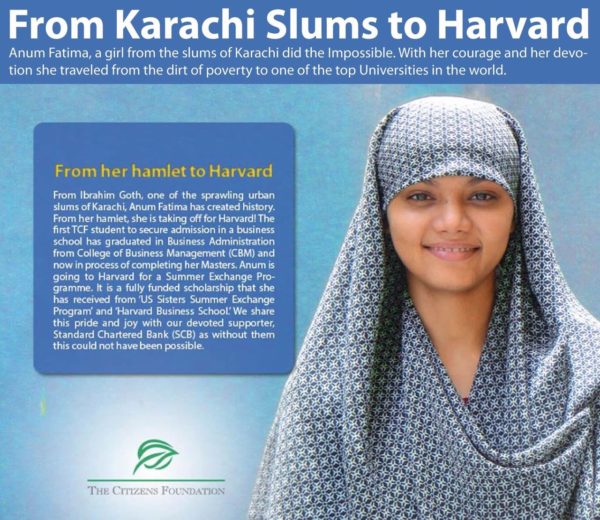 Her talents and hard work awarded her a fully funded scholarship from the TCF from grade 9 to her post graduate, where presently she is pursuing her MBA degree. Moreover, the icing on her achievements was the three months summer school she got to attend on ‘English for Professional Purposes’ at the Harvard University.

When her father learned about Harvard, he could not grasp the magnitude of this whole scenario since he had only done basic matriculate, and earned a limited income working as a driver. Her mother had to make do with no formal education at hand, catering to her 5 children and husband. Her father only began to grasp his daughter’s achievement once his superiors at work congratulated him at his daughter’s achievement.

“I want to work hard, get a job, volunteer with TCF to motivate other poor children and support my family financially. My father has worked very hard to bring us up and I would like him to rest a little and share his responsibilities.”

Anum was Just One of Three Candidates Selected For This Program

This program was sponsored by the US-Pakistan Women Council, and she got selected out of three candidates based on her exceptional academic record and the answers she submitted for the course.

During her course, she exhibited impressive performance and secured the first slot in the program. She also acquired an internship at a US think tank and spoke at the State Department, voicing the real issues that women encounter studying in Pakistan.

“People in the West think that girls in Pakistan are not allowed to study. In all of the presentations I made and all the people I talked to, I told them that parents wanted their girls to study but it was the lack of resources and awareness that held them back.”

Enriched with such an awe-inspiring experience, Anum has high hopes for her future and sees herself chairing a multinational company soon. However, she first wants to devote some of her time to the organization and people that allowed her to pursue her goals.

Working with the TCF, Anum hopes that her story can inspire others to break the shackles of self-inflicted disappointments and face life and its challenges.