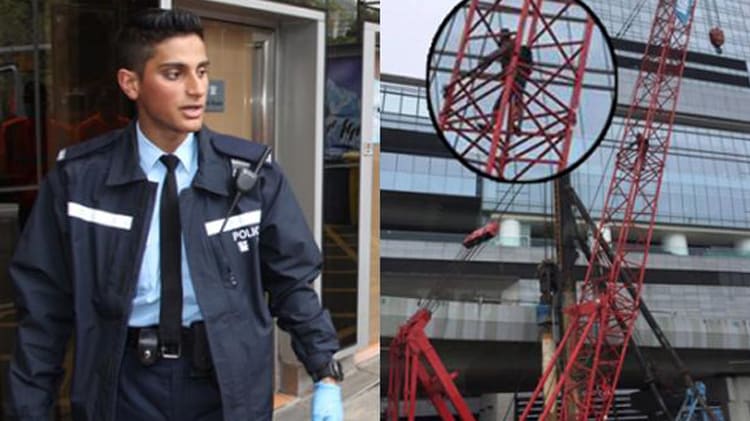 This is the story of a Hong Kong-born Pakistani police constable and how he saved the life of a 34-year old Pakistani laborer who was attempting to commit suicide by jumping from a crane at a construction site on Sunday morning.

Law enforcer Ifzal Zaffar, who is only 20-years of age, and another officer were called at the construction site in Kowloon by the local people after a man named Anan was seen climbing and standing at the very peak of the 20-meter high crane.

After failing to persuade Anan from coming down, Ifzal used his native language (Urdu) fluently to gain Anan’s attention. Ifzal’s efforts were successful and Anan successfully climbed down the crane.

Anan is still reported to be in a hospital in Hong Kong as he is facing distress and is emotionally unstable.

After the incident, local media was quick to fete Ifzal as a hero. He mentioned in one of those interviews that he is an ethnic Pakistani who was born in Hong Kong. Coincidentally, he also happens to be the only Pakistani-origin policeman in the district.

“I used the techniques we learned at the academy. I think he felt safer knowing that I could talk to him in his own language,” he said.

Ifzal, who also speaks fluent Cantonese, graduated from the police academy last April. Since then, he has been working at Yau Ma Tei Police Station. According to media, he is the only Pakistani constable presiding in the district.

Ifzal’s parents came to Hong Kong a long way back used to sell Pakistani clothes to gather funds to feed Ifzal, his elder sister and his younger brother.

Joana Cheung Leung-yuk, Chief Police Inspector, is Assistant Commander of Kowloon City district. He disclosed that Ifzal also participates in voluntary work in the district when is on his holidays.

He added that police are keen on hiring more passionate offers from ethnic minority communities.