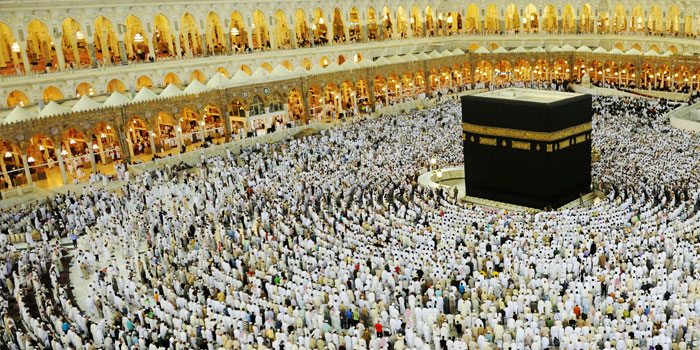 The federal cabinet on Wednesday approved Hajj Policy and Plan 2017, according to which 179,210 Pakistanis will perform Hajj this year.

The meeting was chaired by Prime Minister Nawaz Sharif. He directed the Ministry of Religious Affairs to fully facilitate Hajj pilgrims.

Nawaz Sharif also asked the ministry to review the Hajj expenditures and present them before the next cabinet meeting.

After the bilateral meeting between the government of Pakistan and the Ministry of Hajj, Kingdom of Saudi Arabia (KSA), on January 19, 2017, Hajj Policy 2016 has been reviewed. It has been modified by the committee constituted by the Supreme Court of Pakistan for framing the Hajj Policy 2017 on the basis of an in-depth analysis and consultation with all stakeholders through Hajj workshops at Islamabad, Multan and all provincial capitals.

The committee has framed the Hajj Policy and Plan 2017 by incorporating necessary features of the agreements and ground realities of Harmain Sharifain relating to accommodation, market and facilities to be provided to Hujjaj (pilgrims).

The salient features of the Hajj Policy and Plan- 2017 are:

(iv) on the persistent demand from general public, Hajj scheme 2017 shall be implemented through Government Hajj Scheme and private Hajj Group Organizers (HGOs) in the ratio of 60:40 (High Court of Sindh vide order dated 03.04.2017 directed that the defendant Ministry shall not finalise the reduction of quota of Hajj Group Organizers (HGOs) from 50% to 40% till next date of hearing i.e. 07.4.2017. Hence, finalisation of the quota between the government and private sector will be in accordance with the final outcome of the case);

(v) there shall be no free Hajj as per policy in vogue;

(vi) the applications under government scheme will be invited within five days of the receipt of approval of Hajj Policy 2017;

(vii) any person who has performed Hajj during the last seven years will not be eligible to perform Hajj in 2017 under Government Hajj Scheme and five years for Private Hajj Scheme. This restriction will not apply on Mehram of a lady;

(viii) it would be mandatory for a female pilgrim of any age to be accompanied by a Mehram with her. However, in case of Fiqah Jafria pilgrim, mandatory condition of Mehram shall be implemented in the light of Saudi teachings wherein female of 45 years of age is exempted from Mehram;

(ix) Hajj-e-Badal will be allowed through private Hajj scheme only;

(x) all the Hujjaj will be provided five liters of Zam Zam (in a specially packed bottle) in KSA or upon their return to Pakistan;

(xi) Hujjaj Mohafiz Scheme based on the concept of “Takaful” will continue in Hajj Policy 2017; (xii) international machine readable passport with validity period up to 1st March, 2018, computerised national identity card and medical certificate shall be mandatory;

(xiii) in Makkah, the successful practice of last three years will be followed and accommodation will be provided in Azizia and nearby areas with availability of round the clock Salawat transport for going to Haram Sharif for prayers and coming back;

(xiv) in Madina, 100% pilgrims were accommodated in Markazia (area around Masjid-e-Nabvi) in 2016 which will continue for Hajj 2017;

(xv) shared accommodation will be provided as per Saudi laws and permits;

(xvi) round the clock transport facility will be provided with up model air-conditioned buses for transportation of pilgrims from their residential buildings to Haram Sharif during their stay in Makkah;

(xvii) VIP buses of model up-to 2017 will be provided to all government scheme pilgrims for inter-city (Makkah—Madinah) travelling as per practice of the last year;

(xix) train facility in Mashaair would be provided to maximum number of Hujjaj of Government Hajj Scheme;

(xx) 02% of the total seats under government scheme will be reserved for hardship cases as per policy including 500 seats for labour/low-paid employees of companies registered with EOBI and Workers Welfare Fund sponsored by their respective organisations under their corporate social responsibility;

(xxi) a comprehensive awareness campaign and training to intending pilgrims will be launched. In this regard, newly developed modules will also be included in Hajj training;

(xxii) Hujjaj will be airlifted through designated air carriers as per air services agreement;

(xxiii) Fifty per cent of Government Scheme hujjaj are proposed to be transported /airlifted directly to Medina from Pakistan and vice versa as it will reduce the journey time for pilgrims as well as the cost of travelling;

( xxiv) the initiative of selection of Government Hajj Scheme pilgrims through balloting in 2015 & 2016 was widely appreciated for its transparency. This practice will continue in 2017;

(xxv) Hajj dues will be deposited in Shariah compliant accounts / instruments by designated banks;(xxvi) all those HGOs which participated in Hajj 2016 would be entitled for allocation of Hajj quota in 2017, unless otherwise unfit for allocation of quota due to any violation of Hajj Policy/ service provider agreement/ instructions/SOPs or any other misconduct/lapse on their part;

(xxvii) each HGO is required to submit performance guarantee @ 5% of packages (package x quota) in the form of bank/cash guarantee which will be released on satisfactory performance. Detailed instructions will be incorporated in Service Provider Agreement (SPA) to be signed with HGOs;

(xxviii) monitoring and supervision mechanism for Hajj operation in Pakistan and KSA shall be strengthened on the basis of feedback of Hajj 2016. Complaints of pilgrims of both private and government scheme will be redressed through call centre, email and special monitoring teams in KSA. The online complaint/monitoring system both in Pakistan and KSA regarding government and private scheme shall also be reinforced;

(xxix) keeping in view the increased number of Hujjaj, for welfare services, Hajj medical mission comprising of 540 personnel, 450 Moavineen-i-¬Hujjaj, 270 seasonal staff of MORA & IH and KSA-based Moavineen¬-i-Hujjaj as per requirements are expected to be deputed in KSA for Hajj 2017. Actual number will be determined on need basis;

(xxxi) and there shall be a Hajj Advisory Committee to advise on planning and management of Hajj operation 2017 in Pakistan as well as in KSA.