As foreign funds pile into this year’s risk rally, one of the world’s newest emerging markets is missing out on the action.

Pakistan may be preparing to celebrate the imminent inclusion of its stocks in MSCI Inc.’s emerging-market index this month, yet overseas money is draining away. Foreign funds have sold a net $194 million this year, adding to outflows of $334 million in 2016.

While PSX’s benchmark KSE-100 Index has risen by 2 percent, the MSCI Emerging Markets Index has jumped by 14 percent. The KSE100 Index surged 46 percent last year, beating every one of its peers in Asia. 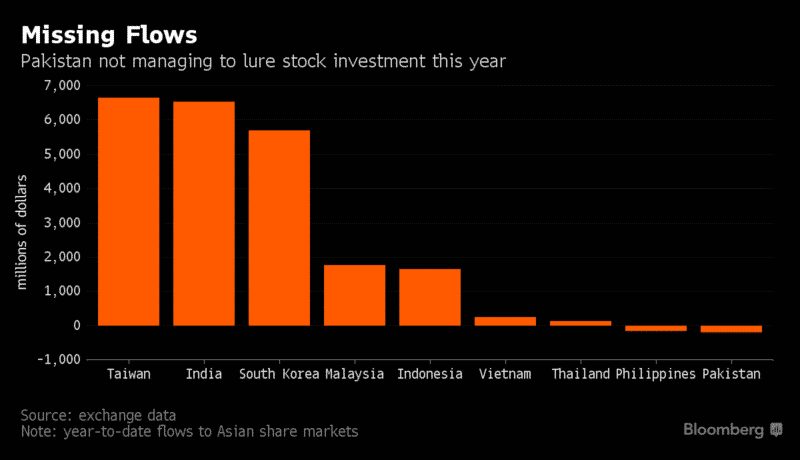 While Prime Minister Sharif is being investigated for alleged corruption, Pakistan’s Supreme Court decided on April 20th not to disqualify him from holding office. It ordered a further investigation of his family’s finances that’s due in 60 days from the decision and another case has caught the light as The Dawn Leaks case investigation is in the pipeline, and it made a huge impact on the market today.

The KSE-100 Index surged more than 5 percent in three days following the Panama Case judgment, reversing this year’s loss. The measure fell 1.6 percent as of 3.00 p.m. in Pakistan on Tuesday, the most among major Asian markets.

The Pakistan Stock Exchange (PSX) continued to attract international attention in earlier March 2017, as six of its listings were taken on board by the Financial Times Stock Exchange (FTSE) index.

“Foreigners have been selling but this has been easily absorbed by mutual funds,” said Mohamad Al Hajj, an equities strategist at EFG Hermes in Dubai. Domestic investors seem to be “optimistic” following the delay of the verdict by 60 days, he said.

Pakistan’s economy is starting to look vulnerable though. Spending on infrastructure projects under the China Pakistan Economic Corridor is widening the current-account deficit and there’s concern Pakistan will be left with unmanageable debts, Gareth Leather, an economist at Capital Economics Ltd. in London, wrote in a note Friday.

The Karachi index will rise less than 3 percent from current levels by the end of the year. Capital Economics Ltd. forecasts that economic growth in the medium term will probably remain at 4 percent.