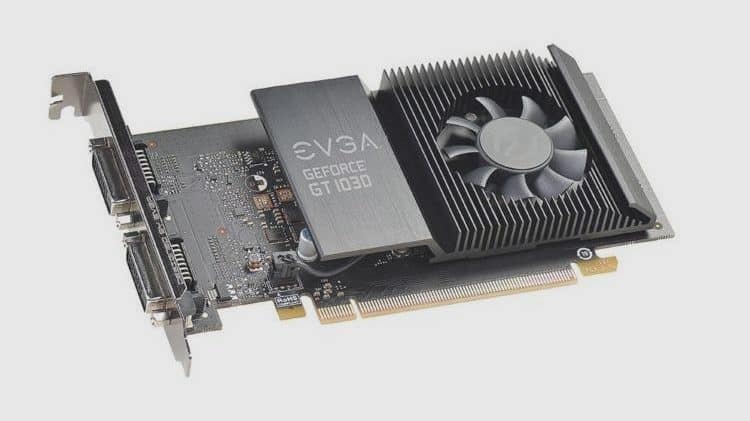 Nvidia has largely focused on catering to the upper-to-mid end of the market with its 10-series graphics card, but the latest entry helps it target gamers on a shoestring budget.

The new GT 1030 is a $70 card which primarily targets e-Sports gamers or users with 4K home theater setups, which sits at the bottom of the 10-series range. It will compete with the recently-launched RX 550, which is another $80 card targeting the same category of gamers.

The card launches with 2 GB of GDDR5 VRAM coupled with a clock speed of 1227 MHz, with a maximum of 1468 MHz. It has a 64-bit memory interface, just 384 CUDA cores as well as bandwidth of 48 GB/s. Other specs such as the transistor count are not known for now.

Tiny In Every Sense

Aesthetically, the card should fit in the most-cramped of systems, measuring just 4.7 by 6.7 inch. It has a rated power draw of 30W (power supplies of 300W are recommended) and comes with DVI, DisplayPort and HDMI 2.0b ports for monitors. There’s support for Vulkan, OpenGL 4.5 and DX12, but for obvious reasons features like SLI and G-sync are a no-go.

The card has been released for gamers already. Competing solutions from the likes of EVGA and Zotac are out too.

While both the GT 1030 and RX 550 target casual or eSports gamers who need power for little more than DOTA 2 or Counter-Strike: Global Offensive, it is still recommended to save for a bit more and go for either the RX 460 or Nvidia’s own GTX 1050, which don’t cost a lot more but more than make up for their prices.

They’ll also be of much more use should you become a more serious player in the future. However, for movie setups at home, the value that they provide can be substantial.