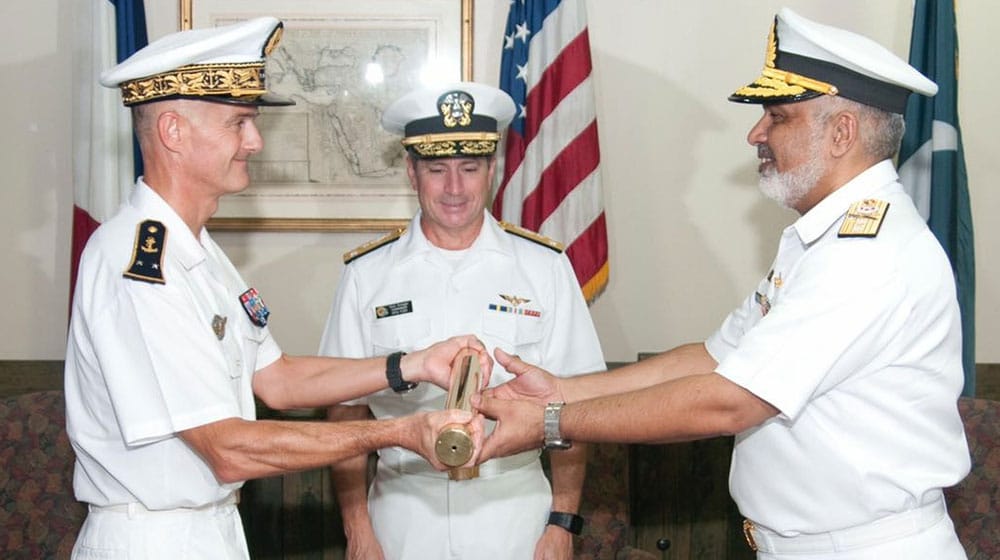 Pakistan Navy assumed the command of the Combined Task Force 150 (CTF150) for the tenth time since 2001. The CTF 150 is multinational naval maritime patrol for counter terrorism alliance, comprising of many countries from all over the world.

Pakistan Navy Senior Office Rear Admiral Naveed Ahmed Rizvi has taken over the command of CTF 150. A change of Command ceremony was held at the Headquarters of US New Saint in Bahrain.

“Pakistan Navy is committed for peace and stability in the region. To achieve this Pakistan Navy is building a stronger relationship with coalition naval forces.” Rear Admiral Naveed added.

The Multinational coalition behind CTF 150 has handed over command to the Pakistan Navy for a total of 10 times since 2001. It portrays how much confidence the world puts on the professionalism and skills of the Pakistan Navy.

CTF 150 was established in 2001 after the 9/11 attack in the United States. The CTF 150 is one of three task forces operated by Combined Maritime Forces (CMF).

It is a voluntary coalition. No nation is asked to carry out any duty that it is unwilling to conduct. Its Area of Operation (AOR) is spread over two million square miles, covering the Red Sea, Gulf of Aden, Indian Ocean and Gulf of Oman (but not the Arabian Gulf, which is the responsibility of CTF 152).

CTF 150 is a multinational task force. Participatory nations have included: