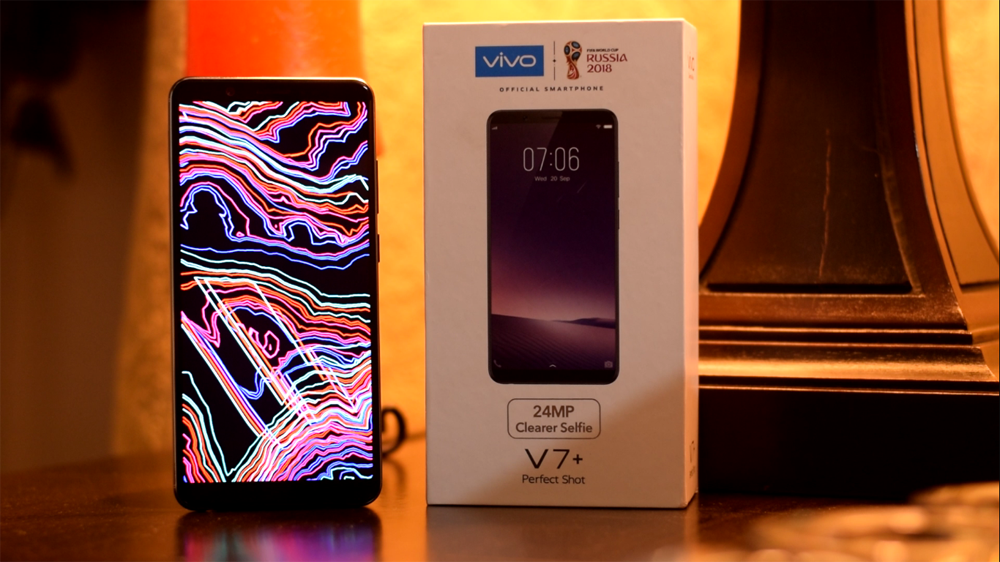 Vivo started their operations in Pakistan just a few months back, launching the Vivo V5s and a couple of other smarphones. However, they offered more or less the same experience as any other mid-range smartphone.

Their newest entrant, the V7+ aims to change that and brings something new to the table: the world’s first 24 megapixel selfie camera.

We got our hands on latest offering by Vivo, and here’s what we think about it.

One of the first things you notice when you pick up the phone is just how light it is. That does not mean that Vivo skimped on its build quality.

It features a slim metal unibody design. On the front you have the huge screen on top of which you will find the front facing camera, the sensors and an LED flash.

On the right side you get your power button and the volume rocker whereas on the left side of the phone you have the SIM slot.

On the top is you’ll find the secondary noise cancelling microphone and on the bottom is where you have your 3.5mm headphone jack, microUSB port and the loudspeaker.

Moving on to the back of the phone, you will find the primary camera a LED flash, fingerprint scanner and the Vivo branding.

Being such a slim phone, there’s a slight camera bump which means that when you put the phone down, the camera lens might get scratched if you’re not too careful.

Moving on to the display of the phone, this is where things start to get interesting. You get a large 6.0-inch panel with a resolution of 720 x 1440. In essence, it is a 720p display while the 1440 pixels are just because of the extra height of the phone.

Needless to say, the display isn’t too sharp. It’s not too bad to the point where you will start to notice individual pixels on the screen, but when you put it side by side with another smartphone with better PPI (pixels per inch), it’s noticeable just how the display suffers due to the lower resolution.

The screen is bright and easily visible outdoors. It gets bright enough to use it directly in the sunlight and low enough that you are easily able to use it in complete darkness.

Being a 6.0-inch screen, the resolution is stretched tall and not wide. This means that it uses a 18.5:9 aspect ratio instead of the standard 16:9 that we are used to.

Since most videos are recorded in a 16:9 aspect ratio, there are black bars on the sides for most videos. You can disable it and stretch the content completely but be prepared to lose some part of the video if you do that since it will be cut off.

Overall, I was impressed with the display of the V7+. Bezel-less displays are becoming more and more common in most flagship smartphones but not a lot of manufacturers use them in their budget line-ups. It’s nice to see that being changed.

Performance is not something the V7+ can brag about, at least on paper. It uses a newer Qualcomm Snapdragon 450 octa-core chipset which is clocked at 1.8 GHz. Accompanying it is 4 GB RAM. In real world usage, the V7+ did not disappoint.

Navigating the UI was smooth and I didn’t notice any unnecessary stuttering or lag. Opening up applications was also done in a decent time and you weren’t left waiting for an app to open, which is the case with most mid-range smartphones that skimp on performance.

The 4 GB RAM proved helpful in moving between apps and the overall performance of the phone. You can easily multitask without having each app refresh itself every time you open it.

Raw benchmarks show that the V7+ is able to hold up against the competition pretty well and that it won’t struggle through most of the tasks thrown at it.

Now we’ll be heading towards the part of the phone that seems to be the highlight of the device, the cameras. Vivo has seemingly put a lot of focus on the front camera, so let’s talk about that first.

The front camera of the V7+ uses a 24 MP sensor with f/2.0 aperture which is also accompanied by a LED flash light. Needless to say, the quality of the photos that you take from the front camera is really good.

Pictures are bright, have the proper lighting and also have a lot of detail. Using such a high-res sensor on the front, it was a given that the quality of photos would be one of the best that you could get on a smartphone.

I wasn’t expecting too much from the V7+ in low light conditions, but it impressed me there as well. The sensor managed to capture a huge amount of light and the results were easily usable.

The back camera is more or less the same story. It uses a 16 MP sensor which also has an f/2.0 aperture. There’s also a single LED flashlight available.

In good lighting, pictures came out to be good, bright and sharp. In fact, most of them looked too sharp. Although it’s not a bad thing but it was instantly noticeable when you took a photo.

It is not a hardware issue and can easily be fixed via a software update.

The V7+ uses a 3,255 mAh battery. Given the slim build of the phone, I wasn’t expecting to see a battery of this size. Moving on to the actual performance of the battery, it was more than good enough.

During my initial days of usage, I ran multiple benchmarks, was taking pictures and generally using the device. At the end of the day it had more than 30% of charge left. I consider myself a heavy user so any light user will get even better battery life.

Even if, for some reason, your battery does go below a critical percentage, you can just charge it up and get a few hours worth of battery life in just a few minutes.

This is because the V7+ supports fast charging, allowing you to instantly charge up without having to spend hours to use it for just a while.

The V7+ also sports a fingerprint scanner. It’s positioned on the center at the back of the phone which makes reachability easy on a phone of this size. It is fast and easily recognizes your fingerprint. It’s always on, meaning you won’t have to wake up the phone every time you have to unlock it.

Vivo V7+ is probably the most unique smartphone the company has launched in Pakistan. From the marketing to the experience, it’s pretty clear who it is targeted towards.

Let’s list down the pros and cons before we declare a verdict.

Pros: It’s the first locally available mid range smartphone with a 18:9 aspect ratio and bezel-less display. And of course, it has a 24 MP selfie camera. The rest of the package checks most boxes with good back camera, good battery life and decent performance.

Cons: The price is the biggest one. At Rs. 35,999, it’s slighly overpriced. The second glaring issue is the resolution which is simply not good enough at this price point.

Overall, the Vivo V7+ is a straightforward phone. It is good enough in most departments, looks great and shoots great photos and videos. If any of these things are important to you, you should definitely consider it.