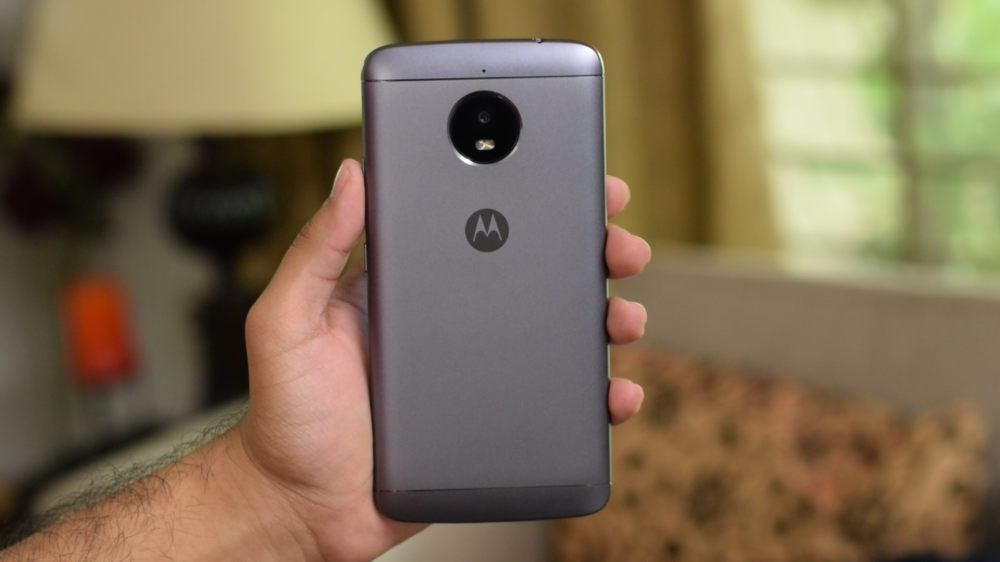 Motorola came back from the dead back in 2013 when it launched the Moto X and the OG Moto G . Even though the Moto X was the flagship, Moto G sold more in numbers and was a success for the company. The OG Moto E came out next year and it carried low-end specifications that were just enough to get it up and running on stock Android but at a dirt-cheap price.

Today we have the 4th Generation of the E series, the E4 Plus and it carries over much of the same story as with the OG Moto E, except maybe the price. We got our hands on one and here’s what we think of it.

Pick up the phone for the first time and the one thing you immediately notice about the E4 Plus is its weight. It’s a very heavy phone and definitely reminds you of the old days when cell phones were much heavier. The weight does give the phone a feel of ruggedness and it looks like as if it could survive a drop or two.

On the front you have your 5.5-inch display, front facing camera, an LED flash and other various sensors. There’s also a front mounted fingerprint scanner underneath the display. On the top of the phone there’s a 3.5mm headphone jack whereas the bottom houses the microUSB port, loud speaker and the primary microphone. The right side has the power button and the volume rocker.

On the back of the phone you will find the round camera cutout for the primary camera and a LED flash. There’s also a secondary microphone and Motorola branding. The back is removable but, unfortunately, the battery is not. Removing the back cover reveals the slots for the dual SIM and microSD card.

The E4 Plus uses a 5.5-inch IPS LCD display with a resolution of 720 x 1280 pixels. Coming in at 267 ppi, it is by no means sharp. The brightness is not on the higher end either and you may have trouble viewing it in direct sunlight.

However, being an IPS LCD panel, it does offer good viewing angles. Apart from that, the color reproduction itself is very good and the colors have a nice contrast and they really pop.

Looking back at the previous generation of the E series, you will see that performance has always been their Achilles’ heel. While it is not too bad, it’s not going to be topping any benchmarks either. Same is the case with the E4 Plus.

Let’s get the specifications out of the way first. The Moto E4 Plus uses a Mediatek 6737 quad-core processor along with 3 GB of RAM. Running the benchmarks, the results didn’t impress. However, I have always stressed on the fact that benchmarks only tell half the story and the same is seen here.

In real world usage, the performance was more than good enough to get tasks done. Opening up applications does take a little bit longer than you are used to, thanks to the processor.

3D performance is also average, most low-end games will work fine but move to any graphic/resource intensive game and you’ll notice the shortcomings of the processor. For example, Asphalt 8 had a visibly lower frame rate with skipped frames, which made the gameplay quite choppy.

The Moto E4 Plus has a 13 MP primary camera along with a single LED flash and an f/2.0 aperture.

The camera’s performance was actually very good. Pictures taken in good lighting are usually sharp and detailed. Colors are accurate too and not oversaturated like on most smartphones.

Moving to a dimly lit condition has the same effect as on the other phones; noise starts to creep in and the quality decreases. Even HDR was useless in these conditions.

The front camera is 5 MP with an f/2.2 aperture. The results of the front camera weren’t too impressive. Even in good lighting conditions, photos came out soft.

You can take a look at the camera samples below:

Now we’ll move to the main highlight of the phone, which is its battery. The Moto E4 Plus sports a huge 5,000mAh battery that Motorola says could last for up to 2 days of usage.

Being a heavy user, I have proved most smartphone manufacturers’ claims to be wrong, however, it looks like Motorola’s claim wasn’t too far off.

The battery on the E4 Plus performed exceptionally well, as it should.

During my usage, it gave an average of 30 hours of standy by time along with almost 8 hours 15 minutes of screen on time.

Those are some serious numbers and a light user will definitely get at least 2 days of battery life. Even if the battery does fall below a critical level, you can put it on charge via the 10W fast charger that comes included in the box.

Usually a battery of this size should take quite a few hours to completely charge but thanks to fast charging, you can have a full battery in just 2 hours.

The Moto E4 Plus carries on the legacy of the OG Moto E if you don’t factor in the price. In my opinion, that is justified since the specifications have also improved. Sure, it isn’t the same bang for the buck phone as it was back in 2014 but it is still a great option.

Rs. 20,000 gets you a large display, decent day-to-day performance, good cameras and unparalleled battery life. Not to mention that since it is running almost stock Android, you’ll be probably one of the first to get the latest version of Android.

However, the competition is stiff with the Xiaomi Redmi Note 4 being a prime contender.