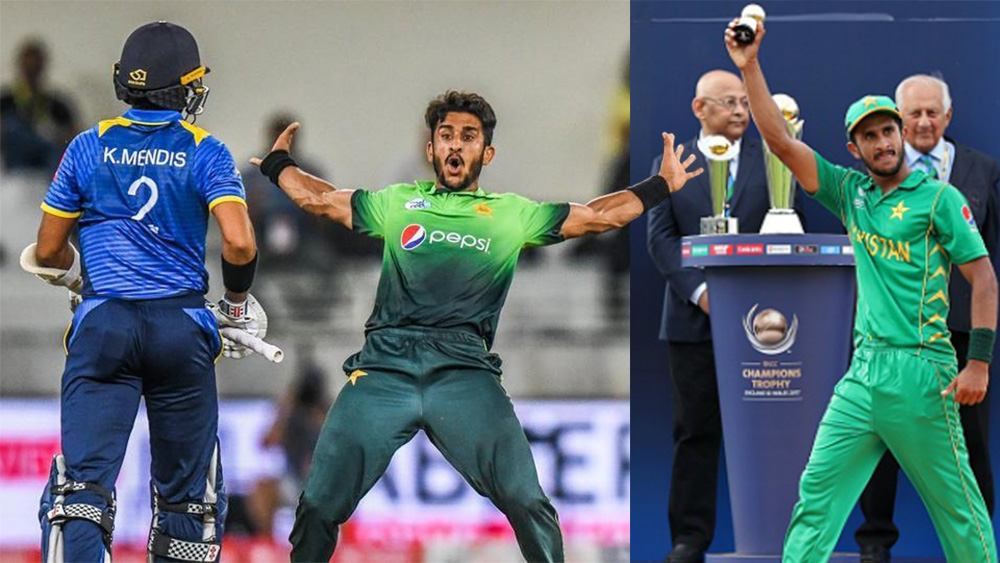 Talking to a media outlet, Hasan unveiled his personal favorite dismissal from this year. The Gujranwala District’s native named the wicket of Wayne Parnell in 2nd Champions League match as his most favorite.

Pakistan played a do-or-die match against South Africa after being hampered by India in the opening match of the tournament. With the victory ever so important, Pakistani stepped up and Hasan Ali was at the front leading the team with his magical spells.

Then came Parnell and took the custody of crease to protect his drowning team. The 6-foot-2-inch left-handed batsman tightened his grip on the bat to face Hasan.

The 23-year-old Hasan came in running from around the wicket, pitched the ball on a good length and the ball swung away from Parnell, who was looking to guide the ball on the on-side. The ball not only swung but also seemed, which made it a sight to behold when the off-stump flew off the ground.

Speaking about the dismissal, Hasan said:

All eyes were relying on the best mid-overs bowler in the final against biggest cricket rival India. As India was the only team to knock Pakistan down in the Champions Trophy, therefore, pressure on bowlers was inevitable.

And when Hasan was given the green signal from Captain Sarfraz to bowl against the Indian legend cricketer and former captain, he certainly didn’t disappoint his team lead.

Hasan Ali dismissed MS Dhoni and blew the hopes of the neighboring country to chase a 339-run target.

Everyone knows what a great player Dhoni is. So it is natural to feel great when you can dismiss someone who is well known for finishing games. His wicket in the final gave me a lot of joy.

In the same match where Hasan Ali sent MS Dhoni home, Muhammad Amir had already paved the road for him by dismissing three finest names of the cricket world; Rohit Sharma, Shikhar Dhawan and captain Virat Kohli in the early overs.

Regarding the bowling experience with such a talented partner, Hasan said,

Recently, someone as big as Kohli said that he finds it hard to face him [Amir]. It is nothing short of a dream to bowl with Amir. He is a star bowler. He is back after a gap of five years, so I feel happy bowling with him.

After his sparkling performance in Champions Trophy, Hasan Ali is regularly playing ODI and T20I series as a key player for Pakistan Cricket team. Previously, he had participated in the Caribbean Premier League and is now staging his bowling skills in the Bangladesh Premier League (BPL).

The goal to stay the best and constant workload made Hasan Ali encounter back problems when the World XI toured Pakistan. But being fully committed to bringing joy to his nation, Hasan believes that a long break from the sport can cause his performance to dwindle.

You have to look after yourself as a professional cricketer who wants to compete at the highest level. Maybe you can become the number one bowler in the world, but to stay on top is the real test. You have to take care of your training, diet and sleeping patterns.

It is remarkable to think that Hasan has managed to get the ‘world-class’ tag alongside his name because normally it takes more than just a few series to do so. However, with a supremely successful year, he has single-handedly made the entire nation proud.