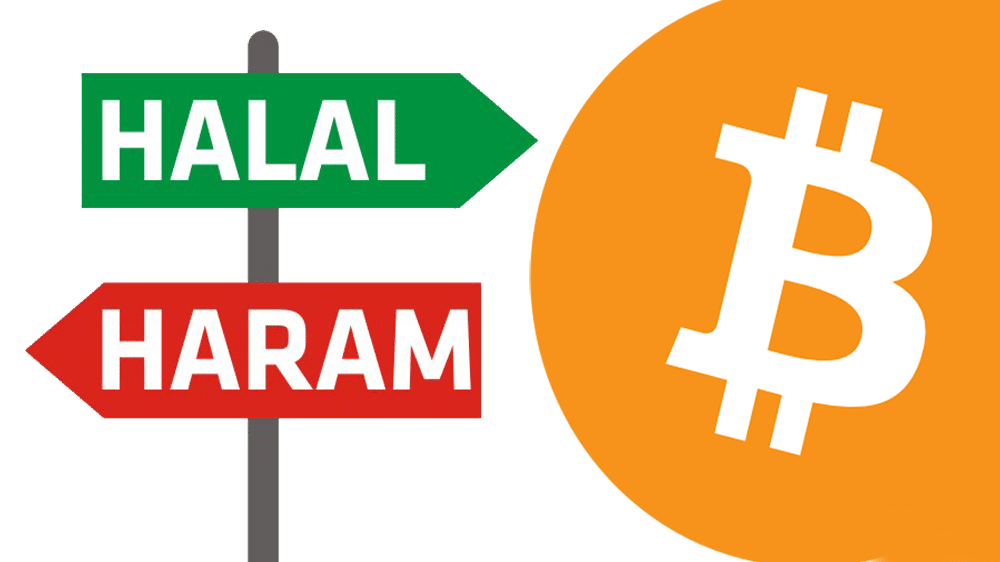 While Bitcoin has been an active hot topic in the tech industry for over a year, its popularity has spilled over to the mainstream in the past month with even my Careem and Uber drivers extolling the virtues of the blockchain technology.

It seems like a lucrative investment if you look at it from a layman’s perspective. Going that way, let’s say you buy Bitcoin. If it continues on its current trajectory you could double or triple your assets or maybe even more by the end of 2018. You could even become a millionaire by doing nothing.

That begs the question, should you buy Bitcoin? Is it permissible in Islam?

We conducted a poll on our website asking the readers about this. Here are the results: 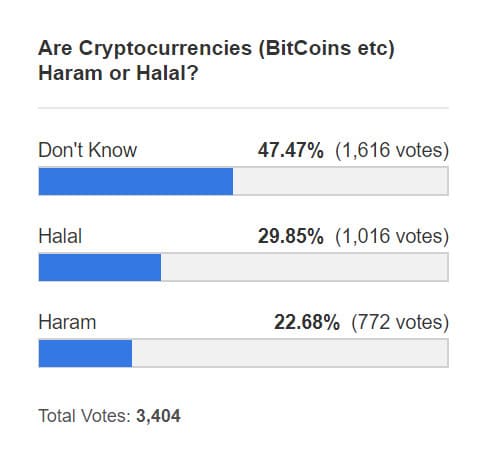 Let’s take a closer look at Bitcoin with respect to being Halal or Haram.

Anything that holds intrinsic value, provided that its value does not shift haphazardly or unpredictably is liable to be used as a currency in Islam.

The Holy Prophet (S.A.W) was narrated by Hazrat Ubida b. al-Simit, in Sahih Muslim Kitab-ul-Buyu’ saying,

I heard Allah’s Messenger (may peace be upon him) forbidding the sale of gold by gold, and silver by silver, and wheat by wheat, and barley by barley, and dates by dates, and salt by salt, except like for like and equal for equal.

As such, any commodity which can be exchanged for something of equal value, without addition of anything, is deemed legal in Islam.

Bitcoin can be exchanged for a commodity of given value and is also used in some countries to pay for them.

Another aspect that gives it value is that people are willing to buy it. For something to have value, it should be in demand by the people. Think of gemstones or gold.

As there is a limited supply of Bitcoin, it’s value also increases or decreases based on the number of people that buy them. It has a market cap, or maximum number of 21,000,000, with 16,775,350 in circulating supply.

This brings us to the other aspect of Bitcoin, is it based on chance or guessing? Meaning is its value stable or at least predictable?

In the Holy Quran it is mentioned that,

O ye who believe! Intoxicants and gambling, (dedication of) stones, and (divination by) arrows, are an abomination― of Satan’s handiwork: eschew such (abomination), that ye may prosper. (Al-Maida 5/90)

As Islam forbids any and all kinds of chance based exchange of currency or commodities, Bitcoin needs to conform to that if it is to be considered Halal.

Bitcoin’s value has risen or dropped by more than $200 within the span of a few minutes at times which makes it hard to predict its value.

If you were trying to sell 1 Bitcoin for USD and during your transaction the value drops by $100 due to various unforeseen and unpredictable circumstances, you will incur a loss. This would make it similar to a gamble.

But considering Bitcoin’s value, which is over $13,000 at the time of writing, $100 is even less than 1% of one Bitcoin’s value. We see similarly small changes all across the industry, i.e. in stocks, gold prices, stocks, currency values etc. Larger rises or falls are rare even for Bitcoin, once again similar to other commodities we normally use for trading.

Predictable to a Certain Extent

That doesn’t mean that it’s value is completely unpredictable. Certain events and happenings often have the effect of shifting value in the stock market. In a similar way, cryptocurrency’s value depends on its ICO, investor interest etc.

For example, let’s say a cryptocurrency expert says Bitcoin’s value will fall tomorrow. This will make Bitcoin owners sell them, as they don’t want to lose money, thereby causing its value to drop.

So once the news about the expert’s prediction makes the round, you can safely predict it’s value to fall, with no chance or gambling involved.

Over time, Bitcoin’s value has risen above the $10,000 mark albeit with occasional spikes and sharp drops here and there. Interest in Cryptocurrency is on the rise so you can safely assume that Bitcoin’s value will also rise over the next year.

What Do The Religious Authorities Say?

Ultimately it all boils down to religious authorities being the deciding factor on these matters.

A Jeddah based cleric, Assim al-Hakeem has declared Bitcoin to be Haram. He said,

We know that bitcoins remain anonymous when you deal with it… which means that it’s an open gate for money laundering, drug money and haram money. Bitcoin is something that is recent and new and there are a lot of serious concerns when it comes to dealing with it … whether it’s from the origin or from the aspect of sustainability and security. As of today, one Bitcoin that was [worth] 0.1 cents is now equivalent to $11,000 plus. This is ridiculous. This is not something physical you can touch.

Buying and selling virtual currencies is not compatible with religion at this time because of the fact that their valuation is open to speculation, they can be easily used in illegal activities like money laundering and they are not under the state’s audit and surveillance.

Note the use of “at this time”. Currently its valuation has shifted unpredictably, “open to speculation”. If at some point in the future, Bitcoin’s value stabilizes, it might be deemed permissible to trade in.

Pakistani religious authorities haven’t given their judgement on cryptocurrencies in general or Bitcoin specifically. As such, Bitcoin being Halal or Haram is an open debate in Pakistan, until a fatwa is levied on it.

What do you think? Is Bitcoin Haram or is it Halal? Sound off in the comments.