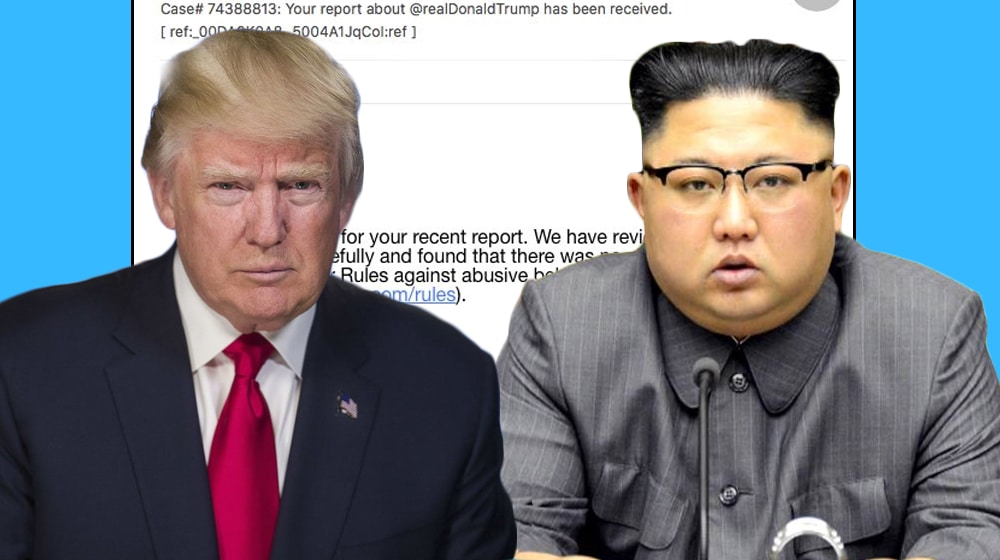 Donald Trump – the United State’s President – is a businessman, a controversial personality, and a Twitter blowhard (pun intended) as he almost waged a nuclear war with Kim Jong Un over ‘nuclear buttons’.

North Korean Leader Kim Jong Un just stated that the “Nuclear Button is on his desk at all times.” Will someone from his depleted and food starved regime please inform him that I too have a Nuclear Button, but it is a much bigger & more powerful one than his, and my Button works!

This war of buttons  began after North Korean “Supreme Leader’s” annual address where Kim Jong Un threatened the United States by saying “this is reality, not a threat” about his always-ready nuclear button on his desk.

Aggrieved and prompted, Donald Trump taunted Kim Jong Un over Twitter in response to his address bragging about his bigger ‘nuclear button’.

Several Twitter users reported the United States President for his obvious hateful threat – an antagonistic nuclear threat to be exact, however, Twitter says that Donald Trump’s tweet is within regulations.

Users who reasonably reported Donald Trump’s tweet for being abusive and harmful simply received an automated reply from Twitter saying “We have reviewed your report carefully and found that there was no violation of the Twitter Rules against abusive behavior.”

They didn't even pretend to care about this one pic.twitter.com/7YMhLfIrXO

This is what the very first para of Twitter’s publicly available rules and policies says,

You may not use your username, display name, or profile bio to engage in abusive behavior, such as targeted harassment or expressing hate towards a person, group, or protected category.

Scrolling down a few lines it reads,

We will review and take enforcement action against accounts that target an individual, group of people, or a protected category with any of the following behavior in their profile information, i.e., usernames, display names, or profile bios.

-Abusive content that reduces someone to less than human

Twitter even told several publishers and confirmed that his tweet did not breach their rules and is not an abusive threat nor does it glorify any sort of violence.

Despite being reported by thousands of profiles, Twitter has not taken any action against the President’s hateful post and people are saying that his Presidential status has allowed him to freely violate Twitter’s policies.

What would we say if the leader of Germany or China or Brazil posted tweets like Trump's? We'd say: That person is not well. https://t.co/kVK9O5hZtm

Twitter did say that they also take into account a tweet’s “newsworthiness” before considering it a violation – even so, the most obvious reason behind this leniency after a clear policy violation seems like his influencing political status.