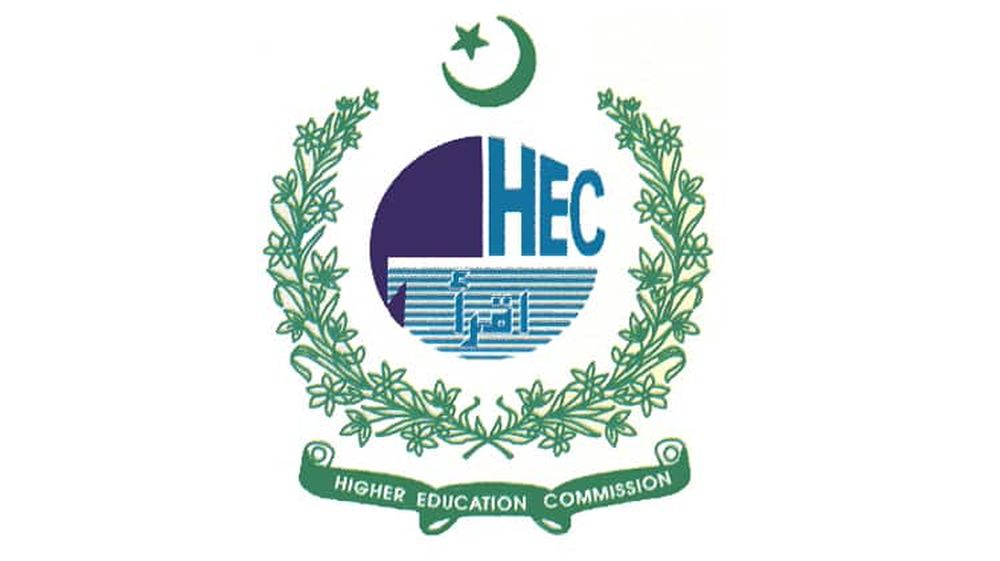 HEC lists achievements made throughout 2017.

In the long list of HEC’s activities and achievements, a few have been shared here.

During the year 2017, HEC awarded 395 overseas scholarships and 1068 indigenous scholarships in various disciplines. Under International Research Support Initiative Programme, 412 Ph.D. scholars proceeded for research abroad, each for a period of six months. While under a bilateral agreement for Hungaricum Scholarships, 157 students proceeded to Hungary for Ph.D., MS and BS studies.

Besides embarking upon the execution of US-Pakistan Knowledge Corridor, HEC launched Allama Muhammad Iqbal Scholarship Programme for Afghan National Students, under which 3000 scholarships will be awarded to Afghan students.

HEC also signed a Memorandum of Understanding with Turkey to avail scholarships for Pakistani youth to study in Turkish universities. HEC held plenty of deliberative sessions to discuss the modalities of Pakistan-UK Knowledge Gateway with all the stakeholders.

HEC also launched the ‘Provision of Higher Education Opportunities for Students of Balochistan and FATA, Phase-II under which a total of 3900 students from Balochistan and Federally Administered Tribal Areas (FATA) will be given financial support to acquire education.

In the said year, HEC and China Road and Bridge Corporation (CRBC), a state-owned company of the People’s Republic of China, signed a Document of Understanding under which the latter will sponsor 30 Pakistani students for Master’s in Transportation Engineering at Southeast University China consecutively for two academic years. The scholarship will be fully funded and will cover tuition, accommodation, return airfare and living stipend.

As a whole, HEC approved 22 Development projects worth Rs. 48 billion for universities in the year. Moreover, HEC launched the Prime Minister’s National Laptop Scheme (PMNLS) Phase IV & V. So far, 300,000 students have benefited under three phases of the scheme executed by HEC. With efforts from HEC, the laptop assembly plant has been installed in Pakistan and students are now able to get “Made-in-Pakistan” laptops along with Evo devices under the scheme.

Signing the Washington Accord

The quality of engineering education in Pakistan also improved due to initiatives and efforts of Pakistan Engineering Council (PEC) and HEC. It was in June 2017 that Pakistan was declared as the Full Signatory of the Washington Accord.

Engineers registered with PEC will now be considered as world-class professionals and will not be evaluated for any migrational assessment for their degrees, in addition to being eligible for professional jobs outside developed countries.

In the ICT sphere, HEC launched an Online Attestation System by developing an e-portal for registration and processing of degree attestation cases. This initiative has made the degree attestation process for candidates easier, as they register online, get their degrees scrutinized and schedule appointment for documents attestation.

HEC set up a Call Centre to facilitate parents, students, faculty and researchers across Pakistan in case of any query regarding HEC programs. Meanwhile, HEC also inaugurated the Smart and Safe Campuses Project as well as Pakistan’s first R&D Centre in 2017.

The commission also launched Event Registration Portal, which will serve as an academic calendar to register events apart from providing information on events, pieces of training and online courses.

In 2017, Pakistan’s first Internet Exchange Point (PKIX) was also inaugurated at HEC under the headship of Pakistan Telecommunication Authority (PTA) and support of HEC as well as Internet Service Providers (ISPs).

The primary purpose of PKIX is to allow networks to interconnect directly, via the exchange, rather than through one or more third-party networks. It will also enable local networks to efficiently exchange information at a common point within Pakistan rather than exchanging local Internet traffic with outside world.

It played a significant role in making the Huawei ICT Skill Competition 2017 a success. Six Pakistani students have won the competition at national level and will take part in Huawei Middle East Final Competition soon.

As a part of National Qualifications Framework (NQF), HEC launched Pakistan Qualification Register (PQR) in order to enable the students and their parents to make informed decisions. The e-portal system helps stakeholders of HEC to view online the programmes of Pakistani universities that have been approved by HEC.

It is aimed to provide clearly deﬁned levels of knowledge, skills, and competencies to be acquired by every graduate. HEC also plans to launch Higher Education Information Management System (HEIMS) soon. Moreover, HEC has proposed the establishment of NIAT (National Institute of Applied Technology) in order to accelerate the technology readiness.

With regard to good governance and law and order in higher education institutions, HEC held a number of high-level meetings and conferences. In this direction, the Ministry of Interior and HEC also launched Young Peace and Development Corps (YPDC), comprising a number of students from 20 Pakistani universities, in 2017. The platform of YPDC will play a vital role in promoting a culture of tolerance and healthy argumentation while discouraging violence.

In 2017, HEC won the Global Good Governance (3G) Award of Cambridge IF Analytica, an international organization based in Cambridge, UK. The award distribution ceremony was held in Dubai, UAE. The 3G Awards are presented to government organizations, corporations and non-governmental organizations (NGOs) for excellence in transparency, good governance and social responsibility. This was the second year running where HEC bagged the award.

As part of its programs for infrastructure development and expansion of universities and sub-campuses, sub-campuses of Sardar Bahadur Khan Women University, Lasbela University and the University of Poonch were made operational in Naushki, Wadh and Forward Kahuta, respectively thus providing higher education at the doorstep for inhabitants of these areas.

However, HEC stopped four universities from admitting students in any degree program, owing to academic irregularities and mismanagement and after non-compliance despite constant reminders from HEC to fulfill the deficiencies. The Commission has so far closed down around 450 MS and Ph.D. programmes of different universities, as they failed to fulfill the HEC criteria. To create awareness among parents and students about the status of universities, their campuses, and programs, HEC continued its series of publishing Parent and Student Alerts in national dailies in 2017 too.

In order to improve the quality of education, many other steps included the improved qualification of university faculty. In 2017, HEC directed the universities and degree awarding institutions to ensure implementation of the Commission’s decision to raise minimum qualification to 18 years of education, for the appointment of Lecturers.

Seven Pakistani universities won representation in 300 best universities of Asia in the Times Higher Education’s 2017 ranking announced in March 2017. Only two universities were enlisted in the ranking in 2016, but the number reached seven in 2017 with the addition of five more universities from Pakistan.

Dr. Mukhtar Ahmed, Chairman HEC and Vice Chancellors of various universities represented Pakistan in Going Global Conference in the United Kingdom in 2017. This year, the theme of the conference was “Global Cities: Connecting Talent, Driving Change.” The conference drew a record number of 900 delegates from 77 countries.

HEC launched CPEC Consortium of Business Schools in 2017 as a step forward towards successful execution of China-Pakistan Economic Corridor (CPEC). The Consortium of the two countries will focus on issues of economics and management. The business schools will be assigned projects to assist the two governments in the development and operation of CPEC.

As a testimony to its commitment to technological advancement, HEC awarded 31 projects under Technology Development Fund to Ph.D. scholars who have returned from abroad after completion of their Ph.D. in order to develop new technologies relevant to country’s socio-economic needs.

HEC launched HEC Vision 2025 in line with the Government of Pakistan Vision 2025 and held multiple consultative sessions for deliberation on future plans for the higher education sector and discuss further improvement in the reform process. Under National Research Programme for Universities (NRPU), HEC honored researchers working in different areas crucial to the socio-economic development of Pakistan. Under the programme, 529 research proposals were approved in 2017. In this lieu, an amount of Rs. 1303.62 million was utilized during this period. Moreover, 59 projects worth Rs. 178 million were completed. Hence, the number of projects underway till December 2017 was 1908.

Under Interim Placement of Fresh PhDs Program launched by HEC, 3016 Ph.D. holders have been offered jobs as Assistant Professors at TTS salary package in Pakistani HEIs with conditions that during a one-year serving period, their host institutions will announce respective positions to provide the inducted PhDs with equal opportunity to compete. As of the statistics obtained from universities until July 2016, 51% PhDs have been inducted by universities out of 1554 and 18% have secured jobs in other educational institutions.

It is important to mention over here that none of HEC funded scholars have an issue of induction at the universities. Those who have done Ph.D. on self-finance or in those subjects in which plenty of Ph.D. faculty is available, they are facing issues in securing jobs in HEIs.

By 2017, HEC has so far awarded over 2, 51, 000 scholarships to Pakistani students including, among others, 8, 700 indigenous, 9, 550 overseas, and 9, 500 need-based scholarships. As many as 200, 700 students of 114 districts have benefited from Prime Minister’s Fee Reimbursement Scheme for Less Developed Areas. Under the Prime Minister’s Laptop Scheme, Rs. 26.46 billion has been allocated for the provision of laptops to talented students for 2013-2018. HEC started its journey with only 59 universities in the country, 2.6% gross enrolment, 800 publications, and 3,110 PhDs, however, the number of higher education institutions has now reached 188 with 9% gross enrolment, 12, 000 publications, and 11, 960 PhDs. Female enrolment has now reached 48%, as HEC is promoting equal higher education opportunities to maintain gender equity.

As a whole, 41% of HEC funding goes to human resource development, 33% to ensuring equitable access, 23% to ICT development and the rest of four percent to other necessities. HEC has so far allocated funds for construction of 505 academic blocks in universities, out of which 357 blocks have been completed and 148 blocks are under construction. HEC eyes ensuring the establishment of at least one institution in each district by 2019 without any compromise on the quality of education.

HEC is committed to facilitating the institutions of higher learning to serve as an engine of socio-economic development of Pakistan.