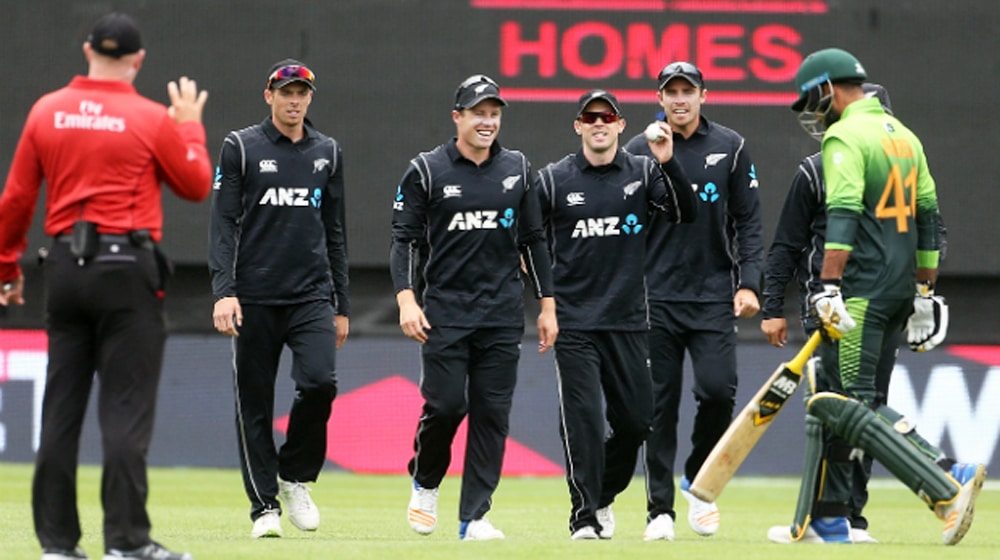 New Zealand were hard to stop yet again, beating Sarfaraz’s men in the 4th One Day International (ODI) by 5 wickets despite the resistance by the visiting team.

Sarfaraz elected to bat first on a pitch which looked quite placid, hoping to put on a decent total on the board, however, some early blows dented Pakistan’s prospects. Half-centuries from Fakhar Zaman, Haris Sohail, Sarfaraz Ahmed and Muhammad Hafeez took the score to 262.

Colin Munro and Colin de Grandhomme overcame the fight shown by the Pakistani bowlers especially Shadab Khan, taking their side to victory and a decisive 4-0 lead.

Opting to bat first, Pakistan experimented with their batting order, sending in the all-rounder Faheem Ashraf to open the batting with Fakhar Zaman – a duo which looked good while batting together in the first ODI – however, the opening stand failed yet again to put runs on the board.

With Faheem dismissed very early in the innings by Tim Southee, Babar Azam left early as well, leaving the responsibility for Fakhar Zaman and Haris Sohail who made a comeback in the side. A 98-runs partnership between the two left-handers stabilized the innings somewhat, with both players going on to score half-centuries.

At 4-123, the senior duo of Muhammad Hafeez and Shoaib Malik had to take the score to a respectable target. Shoaib Malik, after being hit on the head, couldn’t add much and was dismissed by Mitchel Santner soon after.

Sarfaraz (51) and Hafeez’s (81) late surge ensured that Pakistan had a something to bowl at, with Hafeez scoring 22 runs in the last over off Trent Boult. New Zealand needed 263 off their 50 overs to go 4-0 up in the series.

Tim Southee took 3-44 while the part-timer Kane Williamson claimed 2 wickets for just 32 runs off his 10 overs, highlighting the woes of Pakistan’s batting. 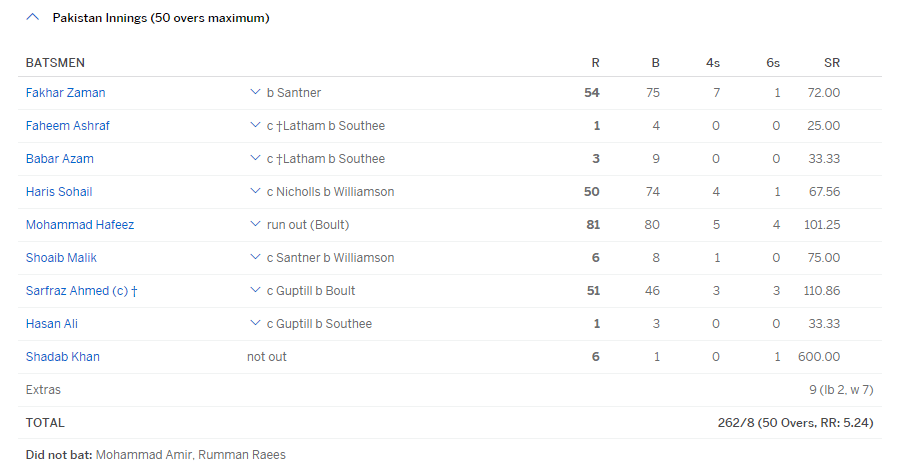 A cautious start by the New Zealand openers allowed them to go hard after a few overs, with Colin Munro bashing the bowlers all around the park for his brisk 56 off 42 balls.

Guptill also looked good for his 31 before falling to Shadab Khan. A triple blow from the leg-spinner allowed Pakistan a chance, however, Kane Williamson and Henry Nicholls made sure that the batting line did not crumble under pressure.

Williamson’s departure at 5-154 opened the doors for Pakistani bowlers to rip apart the Kiwi batting, however, a counter-attacking innings from de Grandhomme (74*) at a strike rate of 185 and a careful 52 from Nicholls helped New Zealand gallop to victory in the 46th over.

Colin de Grandhomme was adjudged the Man of the Match for his fiery knock of 74* on his return to the New Zealand XI. He smacked 5 sixes and 7 fours in his innings.

The 5th and final ODI is scheduled at Basin Reserve, Wellington on Friday 19 January at 03:00 am PST.