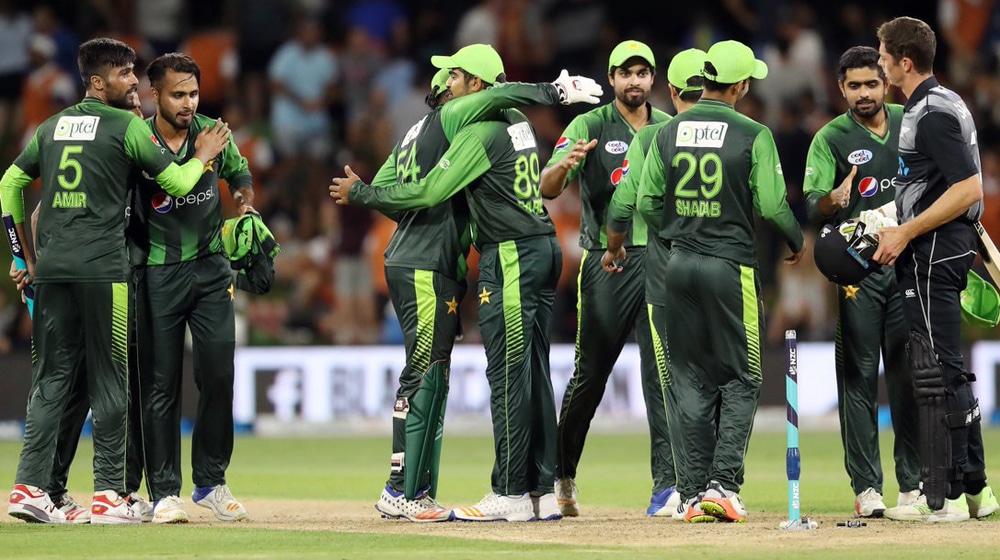 Finally some respite for the Pakistani fans as Sarfaraz XI clinch the T20 series by 2-1 after a complete performance in the series-decider, also reclaiming their number one spot in the ICC rankings.

Another phenomenal performance from Pakistan both with bat and ball didn’t let the Kiwis bag another series. First, a classy finish with the bat and then the bowlers tightening the screws, Pakistan overpowered Williamson XI by 18 runs in the final clash of the series.

The shouts of Pakistan Zindabad were finally loud when Pakistan completed their series victory after a shameful 5-0 result in the ODIs.

Pakistan won the toss and elected to bat first on a pitch which looked to offer plenty of runs on a relatively bigger field in Mount Maunganui.

Pakistan had to leave out Hasan Ali due to injury while New Zealand made four changes, bringing in Anaru Kitchen, Ross Taylor, Tom Blundell and Tim Southee.

Openers Ahmad Shahzad and Fakhar Zaman once again looked like providing the same start as they did in the previous game, however, despite some brilliant strokes Ahmad got frustrated and lost his wicket in a silly manner, looking to scoop in past the third man.

Babar Azam continued from where he left off at Eden Park, adding 36 runs in a partnership with Fakhar Zaman before he fell to Ish Sodhi trying to cut the ball. Sarfaraz’s move to bat up the order at number 4, which paid off in the last game, worked well this time as well.

Fakhar and Sarfaraz kept up with the scoring rate before Fakhar holed out to deep cover. It was a controversial catch but the soft signal ruling by the on-field umpire made sure he didn’t get the benefit of the doubt. Sarfaraz scored 29 before Santner sent him back to the pavilion.

The left-handed duo of Haris Sohail and Umar Amin played sensational cameos, with Umar smashing three sixes for his 21 off just 7 balls. A late charge from Pakistan helped them score 109 in the last 10 overs, finishing at a very challenging 181-6.

Mitchel Santner ended up with figures of 2-24 in his 4 overs while Sodhi also took 2 conceding 47 runs. The Kiwis were poor in the field, dropping a few catches despite their reputation for being an impeccable fielding unit.

Chasing 182, New Zealand were cautious from the start, thanks to some tight bowling from Pakistan’s opening bowlers. Williamson wasn’t allowed to score freely which ultimately led to his downfall.

Kitchen and Guptill took the challenge of upping the ante, smashing the bowlers around the vast field. A double-strike from Shadab, removing Guptill and Kitchen, dented the hosts’ prospects of chasing down the target. Guptill got out after a fiery half-century which included 4 sixes and 2 fours.

With three down for 87, New Zealand were hoping for carnage from d Grandhomme, but Aamer Yamin had other plans, rattling the stumps of the explosive all-rounder.

At 4-89, New Zealand were reeling, relying heavily on their most experienced player Ross Taylor.

Having hit 3 sixes in just 10 balls, Taylor looked like taking the game closer than expected, but the experience of Muhammad Amir won the battle against Taylor, thanks to a surprising review from Sarfaraz and the bowler. The original decision of not out was reversed, judging the player caught behind.

Tom Bruce got cleaned up soon after. From there onward, it was an uphill task for the lower order of the hosts who ultimately fell short of the target by 18 runs.

Muhammad Amir, Aamer Yamin and Shadab Khan were simply outstanding, restricting the flow of boundaries and getting wickets to tie down the hosts.

Shadab Khan walked away with Man of the Match award while Muhammad Amir was judged the Man of the Series.