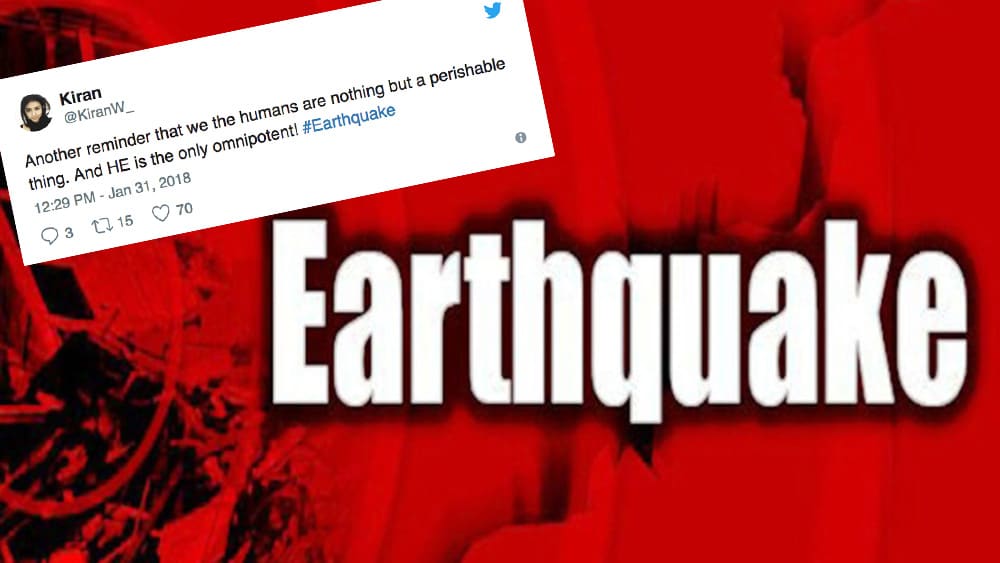 Earthquake tremors were felt in several areas of Pakistan. It is said that about 270 million people felt this earthquake which measured 6.1 on the Richter scale.

Preliminary reports show that the no major casualties have occurred so far. The only reported loss of life was from Lasbela, where a young girl died as her house’s roof collapsed. Another 9 were also reported injured as a result of this natural disaster.

The World’s Most Influential Civil Engineer Was A Muslim

Many people who felt the tremors were left in a state of shock, even fear. As it always happens in such events, most of them took to social media to share their reactions.

Lets take a look at how Pakistani people reacted to the earthquake:

A noted journalist mentions that such events can’t be controlled by us:

Even some showbiz personalities chimed in:

Zalzala ?? Lahore was that earthquake?

Some of us decided to rethink our priorities:

High time to rethink where are we standing.
Time to ask forgiveness and Allah's mercy.
May Allah protect us all
Ameen#Earthquake

The tremors were felt across the border too.

Woah! #Earthquake of magnitude 6.1 hits Hindukush region of Afghanistan and impacted all over Punjab, Chandigarh and Delhi/NCR.

This earthquake, it seems was just one of the many in the last 24 hours:

Another reminder that we the humans are nothing but a perishable thing. And HE is the only omnipotent! #Earthquake

Some of us do the right thing in emergency situations like these:

Sitting in Lahore was on call with our office in Rawalpindi and suddenly they said #EARTHQUAKE, I asked them to hang up and leave. I was telling my colleagues here about what and the building starting shaking here too. So tremors travelled from Rwp to Lhr in what 5 seconds?!

Woah! #Earthquake of magnitude 6.1 hits Hindu kush region of Afghanistan and impacted all over Punjab, J&K, Chandigarh, Delhi/NCR and UP Stay safe everyone.

The earthquake measured 6.1 on the Richter scale with a depth over 170 kilometers, according to reports.

Our neighbors also felt the earthquake and used social media to spread the news.

There are reports that after-shocks will follow. Keep watching this space as we will keep you updated on the situation.