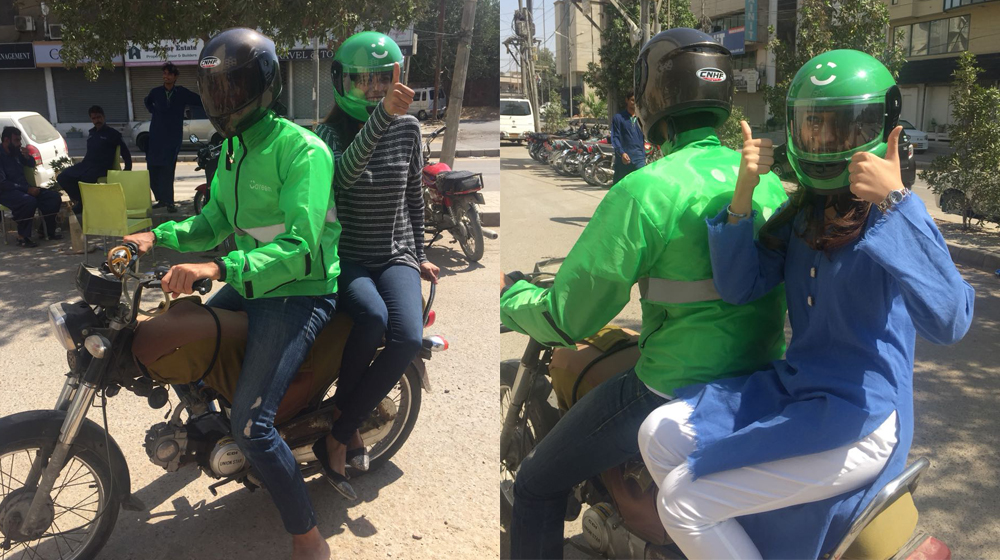 Afreen Khan, lecturer at a prestigious engineering university in Karachi, took her first bike ride today. Khan says the experience made her feel empowered and liberated and that she’d want to learn to ride the bike herself as well.

“I didn’t know bike rides could be so much fun. I’m glad I got over the social stigma attached to it and finally booked my first ride with Careem. This makes me want to learn to ride a bike myself,” said Afreen Khan.

Khan is not the only woman taking a bike ride with Careem today. Hundreds of women across Pakistan are enjoying their first bike rides as a part of an initiative by Careem to reclaim public spaces for women.

The initiative aims at changing the common perception about bike being a man’s vehicle and reiterating that women must enjoy stress-free riding on their choice of conveyance.

In a patriarchal society like Pakistan, there’s no denying the fact that women are often restricted to their homes due to the lack of freedom of mobility. There’s an absence of any kind of public transport barring the recent metros in some major cities of Punjab. This proves to be a major hindrance for many women to enter the workforce.

With the entry of ride-hailing services like Careem in Pakistan, traveling has become easier and more convenient for these females. This is the reason a large percentage of Careem users are women. However, why restrict them to a certain vehicle only?

Women like men should be able to ride bikes, eat at dhabas, wear whatever they want and work for a living – and all that without being ridiculed for their life choices. According to the last census women form almost half of the total population of Pakistan. Today females are entering new fields and often out-performing makes in academics. Many of these women look to become a part of the workforce – this will not only improve their life standards, it will also contribute to the economy of the country. No country can get ahead if it leaves half of its people behind. With initiatives like empowering women to reclaim public spaces, give them independence of travel, and income generating opportunities, Careem is taking on the responsibility to enable this change in the Pakistani society.

Careem Reduces Prices for its Bike and Rickshaw Rides

Maham Siddiqui, a student of medicine who took her first bike ride with Careem today, said:

I would like to learn to ride bikes just to break the social barrier. Women are stared at if they sit on bikes like men do – too un-lady-like for people to digest. I think it’s simply foolish to impose gender roles on whether a person should or should not ride a certain kind of vehicle.

It was recently revealed that female Captains in Careem Pakistan outnumber those in all other 13 operating countries. Regardless of the common perception of associating driving jobs with males, Careem Pakistan leads the female fleet in numbers and with bike rallies like this one, more and more women will be empowered to get out of their homes and travel on their choice of vehicles to and from their workplaces.

The ride hailing app has also announced its plan to recruit more women to become captains in all the countries where Careem operates and have as many as 20,000 female captains by 2020. Not only this, Careem has a zero-tolerance policy for harassment and has strict actions in place for any misbehavior. All Captains registered with Careem are given anti-harassment trainings and captains cannot start driving with Careem unless they have attended these sessions.

In many households, women are primary breadwinners and often look for alternative, flexible ways to support their families. Working as captains with ride-hailing apps can prove to be a great source of income for these women. Regarding this Mudassir Sheikha, CEO and Co-founder of Careem said:

We realize that up until today we have focused our efforts predominantly on attracting and catering to male Captains. It’s time for us and the entire industry to wake up. Not only is there a moral obligation to do so, but there’s also a huge opportunity to grow our business around women and give them the economic opportunity to excel. Women are often the primary breadwinners and looking for alternative, flexible ways to support their families.

With increased women participation in the workforce and easy access to transport and other basic necessities, women can make a huge difference in the society. It’s high time women are included and are given equal share in aspect of life – whether it be work, home or roads.