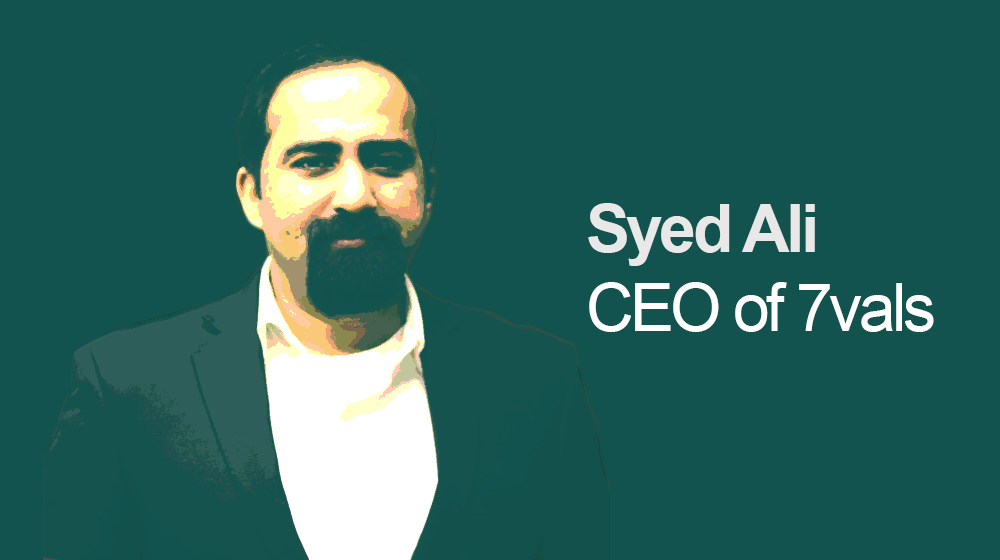 What’s the size of Pakistan’s IT exports industry? The number reported by the State Bank of Pakistan, which only looks at official banking channels, is $1 billion. The PSEB estimates them at roughly $3 billion based on a more holistic approach of estimating remittances from non-banking channels, misreporting, freelancing, and expats.

Various government incentives like zero taxation are helping to grow this number and companies like 7vals are taking full advantage. If you aren’t familiar with the name, you aren’t the only one. While its founder Syed Ali is well known in Pakistan’s tech sector, 7vals has flown under the radar.

It all started when Ali moved back to Pakistan after half a decade at Sun Microsystems in the US and saw an imbalanced industry. Product based companies were rare and most IT companies in Pakistan were focusing on services (the situation hasn’t improved since then).

Tier 1 companies employ over 50,000 people. Headcount at tier 2 companies is over 5000. There are always exceptions but I have trouble recalling more than a couple of tier 2 companies in Pakistan. For pure software services, the situation is even bleaker.

Since the success of service based companies can be gauged by their size – that is, the number of employees, I can see why he’d be dismayed by the state of the IT industry. Not only that, the barrier of entry to services is inherently lower than products and it is not wise to hedge our country’s bets for the future if companies are competing on just price, since we don’t have any that compete on scale.

“It is also a matter of how much value you can create. Service-based companies can’t match the valuations of product based companies. As an example, at Apple, the ratio of revenue to an employee is $1.9 million to 1. This applies to smaller sized product companies as well such as Craigslist and Whatsapp (pre-acquisition).”

So after stints with TRG and Confiz Solutions, Ali founded 7vals in 2011. The company provides asset management and equipment tracking to improve ROI and lower administrative overheads for enterprises. Its client roster boasts 20% of Fortune 500 companies including Microsoft, Nokia, 3M, and others.

Government: The Main Roadblock to Growing the IT Sector?

So why aren’t we seeing more companies like 7vals? Ali believes the main roadblock to IT industry is the government. “Compliance with the letter of the law is not enough in Pakistan. The attitude of regulatory officials is problematic and they wield seemingly arbitrary power. On the international stage, developments like Pakistan’s inclusion in the FATF greylist are destroying any chance local companies have of competing internationally.”

Pakistan’s IT Sector Has Grown By 150% in 5 Years: Anusha Rehman

Pakistan’s worsening international reputation is an incredible threat. The US under Trump is an increasingly challenging market and the EU is all set to implement the General Data Protection Regulation (GDPR) in May later this year and its effects could be drastic. Ali isn’t happy with the government’s response to these problems.

Spending millions of dollars advertising on buses that Pakistan should be your next investment destination is naive. What will actually help is being smart. For example, in the US, there are a lot of trade associations and they exert influence and lobby on behalf of businesses. The government needs to tactfully assist and pull the right levers to ensure that Pakistani businesses can engage with such associations and don’t have to shift headquarters to other countries just to get over the stigma of being from Pakistan. Recently started initiatives like sponsoring trade shows and delegations are a good step but much much more needs to be done.

There are issues at home as well when it comes to the balance between the private and public sector, according to Ali.

“Government and semi-government bodies are acting like software houses and are competing with the very people they are supposed to regulate. A lot of projects can be outsourced to the private sector, which can do them more efficiently and productize them. In my opinion, the government should focus on policy and ensure that the business environment is conducive.”

As an engineer who switched fields, I was curious to hear Ali’s thoughts about the chasm between the industry and academia. “Talent acquisition is one of our biggest problems. Right now, you can find some truly exceptional people but if you want to scale, the talent acquisition problems are almost insurmountable due to high attrition rates caused by brain drain,” said Ali.

Explaining how he works towards reducing employee attrition, Ali said, “To help our employees, we have a couple of programs. First, we encourage everyone to take online courses (MOOCs) from Udacity, Coursera, and other platforms. We refund them for courses that have a direct or even an indirect impact on their work and personal development.”

“Secondly, we take employees to conferences and trade shows to impress upon the importance of scale and the challenges faced by big companies. Staying in Pakistan can induce a bit of myopia and you don’t really appreciate the scale at which big businesses operate unless you go abroad and see them work in person.”

If you go to scale, the talent acquisition problems are almost insurmountable in Pakistan

Attrition rates aren’t the only problem faced by companies. A 2016 survey said that 77% of employers aren’t happy with the quality of grads.

Ali believes nothing but a fundamental overhaul of the education system, including primary and secondary education, is needed to address the problem. What do we do in the meanwhile? There is a lot of buzz around e-rozgaar and freelance programs started by provincial IT boards and even the federal government. Could they bridge the skills gap?

Ali is a skeptic.

“The impact of initiatives like e-rozgaar is going to be fairly limited in my opinion and the reason is that they are akin to putting a band-aid on a gaping wound. If a 6-month program could prepare someone to jump right into a modern taskforce, we wouldn’t need a decade and a half long educational system.”

“Don’t get me wrong; these programs will provide a stable income and lifestyle for the participants, but we need to avoid the trap of producing the next generation of blue collar workers. This is because they are highly susceptible to disruption by the next generation of technologies like AI, robotics, and automation.”

On the startup ecosystem in Pakistan, Ali was cautiously optimistic. “The startup scene in Pakistan is actually quite good and it’s certainly better than it was ever for the likes of us. However, I would say that the pendulum has actually shifted the other way and now startups and entrepreneurship are being hailed as a panacea for fresh graduates in particular.”

Success isn’t always glamorous and Ali bemoaned the lack of appreciation of the younger generation for simply working at a company and learning the inside out of a business first. “There’s a lot of value to be had by understanding how traditional companies work and a lot of learnings you can apply from that experience into your own business. Not working anywhere and jumping straight to entrepreneurship is problematic for a number of reasons.”

A bemusing anecdote showcased just how far the pendulum has actually swung. Ali recalled his experience with several candidates seeking employment, “I’ve interviewed a fair bit of candidates and the main highlight on their CV was that they got accepted into a particular incubator as a startup but it failed. It’s not a highlight unless you were at YCombinator and even then it’s because of their rigor and not because of their fancy artwork.”

“Founders need to aspire to more. They need to get more out of the experiences offered by these incubators and accelerators. If you aren’t doing anything with it, you’re wasting your own time and the limited resources that Pakistan has to offer.”

The Most Important Characteristics for Young People to Succeed

Detailing the qualities he believes are necessary for startups to become successful, Ali said, “The important characteristic for startups to succeed is the passion of the founders. In Pakistan, money is often one of the main focuses of entrepreneurship. Money is just the byproduct of your passion for your work. It’s just needed to scale and run your business. It can’t be a motive.

Second important thing is a vision.

Finally, having the ability to understand the cause of failure can be a good thing, but only if you learn from it. If there isn’t a learning attached to the setbacks you have, if you don’t think about how you can do better, you’re not an entrepreneur.”