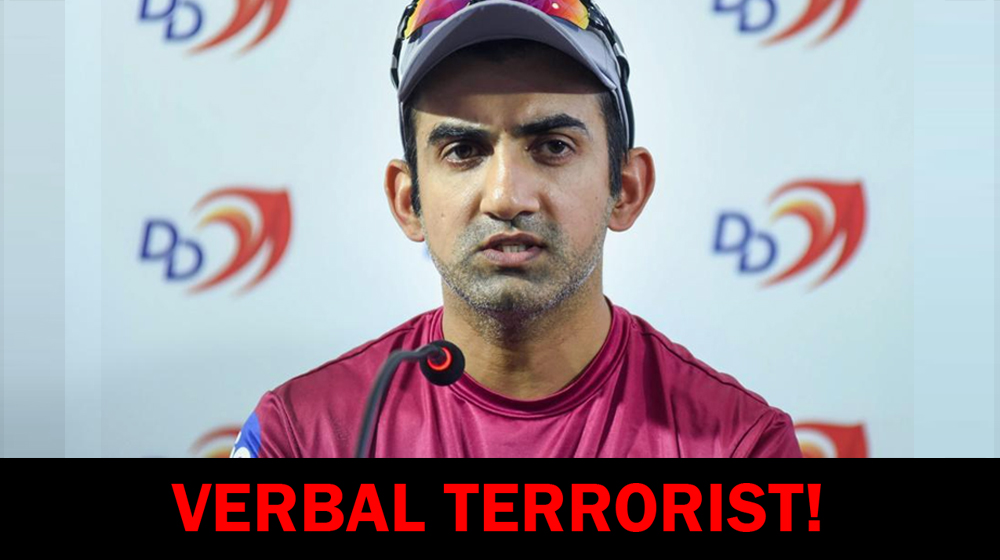 There is no denying the tension between Pakistan and India, where there are people who wish for peace and harmony, there are also people on both sides who still consider the opposing country and its men as enemies, one of which seems to be Gautam Gambhir.

The former Indian cricket team opener has been heavily criticized by Australian journalist, Dennis Freedman, for his repugnant remarks on future Pak-Ind series.

In an interview with ANI, Gautam said that India should not only boycott Pakistan from all cricketing activities but also ban them from everything.

Merely boycotting cricketing ties with Pakistan will not help. If a ban is imposed, it should be in all sectors, be it films, music or any other. Nobody from Pakistan should be provided an opportunity to perform in India unless the relations between the two neighbors improve.

In the recent past, we have initiated talks with Pakistan on many occasions, but no substantial outcome has been achieved. Every country has its own level of patience and importance. First thing, of course, is to talk; but if that doesn’t work, one has to take strict action. There is no point in politicizing the matter.

Perhaps Gautam’s anger and frustration have been fueled by his failing cricketing career as after being snubbed by national team’s selection committee, again and again, Gambhir has now recently been asked to step down as the captain of Delhi Daredevils as well.

The irony of the situation is that Gautam was also dropped from the national side because of his ‘attitude problem’, which has not improved thus far.

Irrespective of the reason, Gambhir’s words did not sit well with Dennis who took the matter to social media and tweeted:

Dennis, who traveled to Pakistan for the PSL finals, fell in love with the people and its culture. He claimed that Pakistan’s perception at the international stage is all made up and after seeing things with his own eyes, he has nothing but love for the country.

To further elaborate his liking for the country and PSL, he changed his username to “Danny Does PSL” during the 3rd edition of the tournament. He received a lot of hate comments from his Indian followers which is why he has chosen “Danny Doesn’t IPL” username to further antagonize the fans.

It is only natural that he has taken serious offense in Gautam’s remarks since they are aimed to spread hatred and bigotry.

As previously pointed out by Shahid Afridi, he claimed that during his time, every Pakistani has had an argument with an Indian cricketer on the field but everyone made up after the game and sat together.

However, according to him, after his famous clash with Gautam, Afridi said that Gautam never recovered and never stopped being a child. He added that cricket is a gentleman’s game and Gautam does not fit the criteria as he lacks professionalism and empathy, which is evident from his remarks today.