The event was attended by Oil and Gas Regulatory Authority (OGRA), DG Oil, Member Oil, Senior officials from Rescue 1122 and National Highways and Motorway Police (NHMP) along with media.

An overview of the Downstream value chain was presented that demonstrated the role of each individual in ensuring the safe operations of the Oil & Gas Industry in mobilizing the nation. 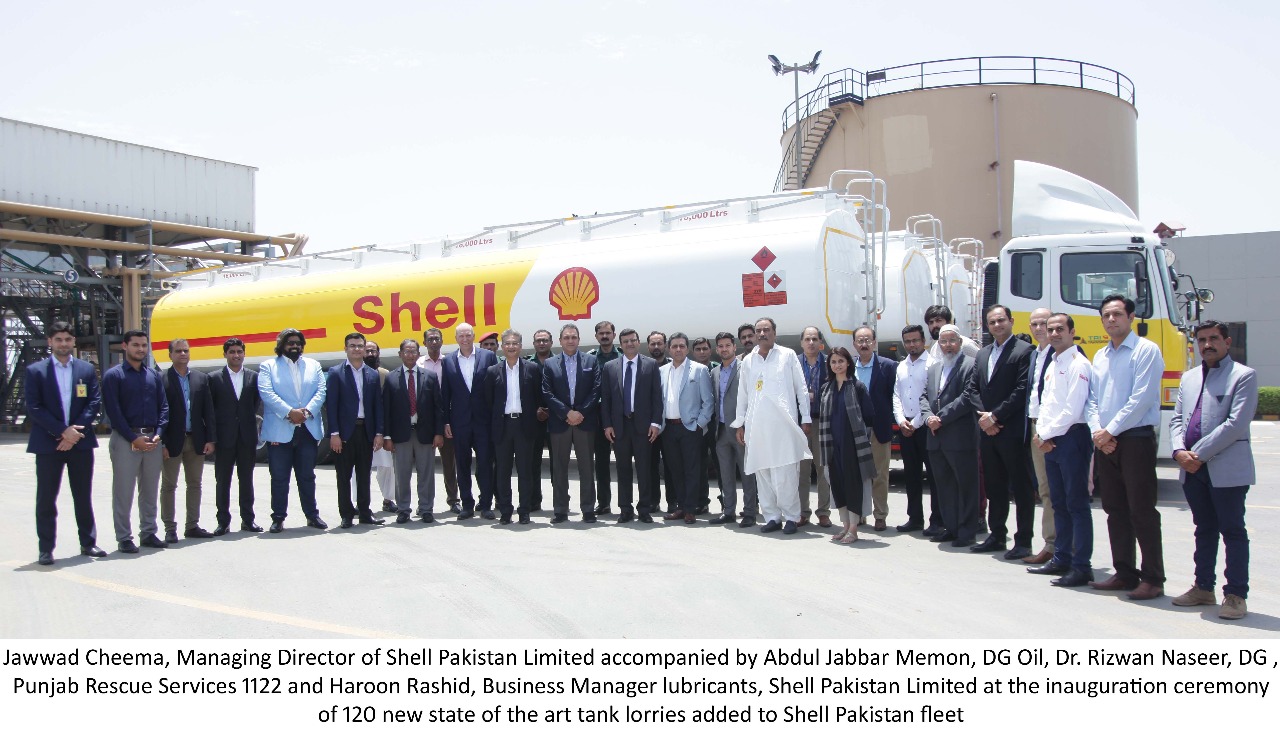 “By investing in the addition of these tankers, the total number of Shell dedicated haulier fleet has now increased to 630, which places SPL in a leadership position with regards to compliant fleet in the Industry. Being the oldest multi-national in the country, we have always been at the forefront in introducing international products, offering and standards to the Pakistani market,” said Jawwad Cheema, Managing Director, Shell Pakistan Limited.

With this new addition of 120 lorries, the total number of oil tankers that Shell Pakistan operates has reached 630. Company said that it has plans to add another 100 tankers by December 2018.

Not to mention, Shell Pakistan contracts with third parties to operate and maintain the oil tankers that transport fuel products from Karachi to rest of Pakistan.

These third party contractors are very closely watched by Shell Pakistan to ensure that all tank lorries are compliant to a very strict policy that company has set.

Each and every tanker has to meet certain criteria — while keeping safety of staff, public and the product in mind — at the time of induction and throughout the period of contract in order to be allowed to transport Shell Pakistan’s products throughout the country.

Just in case if you are thinking, Shell outsources the transportation of its products as the company thinks that it should focus on its core business while logistics could be handled by third parties.

Shell Pakistan was the first company in the country to bring in ADR standards to Pakistan in 1998, setting industry standards in transportation and handling of oil products, with its global safety requirements being shared and adopted across Pakistan’s supply chain.

These tank lorries are now being inducted across the industry, increasing the number of country standard compliant fleet in the country.

While the reliance on oil tankers for transportation of oil products is expensive, risky and time consuming, Pakistan currently has no alternate way of transporting oil products from Karachi port — where the oil products first land — to upper parts of the country.

With demand surging and particularly when over 65% of entire market demand is in upper parts of Pakistan (Punjab, KPK), this reliance on tank lorries for transportation of oil products was never going to work in the longer run.

This is the reason Shell Pakistan has partnered as one of the largest private shareholder to lay a multi-grade white oil pipeline that is scheduled to be ready by 2019.

The project will significantly reduce primary movement of fuel by road, but that won’t completely eliminate the need of oil tankers mainly due to Pakistan’s size and geography where oil distribution companies must reach to fulfill market needs.

This essentially means that road transport will continue to exist for secondary transport and investment in safe transportation is vital to make the roads of Pakistan safer.