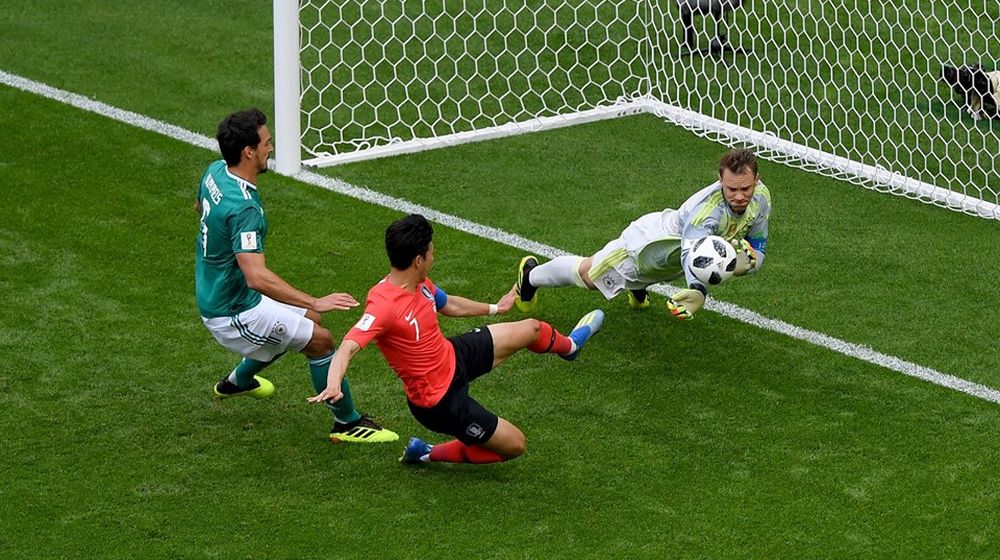 Despite the competition still in the group stage, the on-going World Cup has been termed as the best edition ever. Cynics argued that inclusion of ‘sub par’ teams would ruin the essence of the competition. However, the reality could not be more different as some of the best performances this World Cup have come from those teams.

In the latest development, a shocking upset has taken place. The reigning world champions Germany have been eliminated from the FIFA World Cup 2018 after suffering an absolute shocker of a defeat. The Germans were left dazzled as the South Koreans put two past them in injury time.

A goal could’ve sent Germany to the round of 16, however, the East Asians stunned them by scoring two goals in the space of just four minutes.

Kick Off in Zero Gravity: Football Made in Pakistan Ends Up in Space!

This is the first in 80 years that Germans have been eliminated from the world cup at the group stage.

Argentina, finalist of last year, also barelymanaged to qualify after a terrible start to their campaign.

Following the defeat, German coach, Joachim Low claimed that his side did deserve to go out.

This is something for us to reckon with. This is historic and I am sure it will create an uproar back home.

At this tournament we didn’t deserve to win again or move to the round of 16. We were eliminated not because we didn’t want to win but we never had the chance to take a lead at any point – we were always lagging behind, trying to keep up.

On the contrary to what they are known for, the Germans started their campaign in a rather sluggish manner. They got schooled by the far inferior Mexican side in terms of talent and gameplay. Then they unconvincingly managed to salvage three points against Sweden after a late Toni Kroos freekick and kept their hopes alive.

In the last match, they just had to see off an inexperienced South Korean side to progress to the knockout stage. However, the Koreans, despite the fact that their fate was already decided, played with determination and far more enthusiasm than the Germans.

Here is how Germany’s results stood in the Group F.

Here is how the rankings in Germany’s group stand as of now:

Sweden and Mexico have progressed to the round of 16 while Koreans and Germans will fly back home.

The four-time world cup winners Germany lifted the trophy in 2014 and crashed out at the group stage in 2018 continuing the tradition.

Will the Germans ever win in Russia?