A bloodbath was seen at the Pakistan Stock Exchange (PSX) today, where political happenings dictated the sentiments of investors and the index slipped to the year’s low, breaching the 40000 points barrier with bears all over the market. 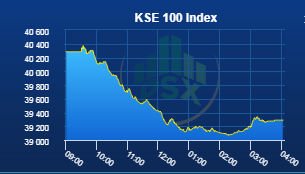 Market remains confused by the unfolding of political events right before the elections on July 25th, and are worried about political uncertainties which may lead to a delay in the election period.

The Supreme Court’s order of summoning heads of three private banks in a case about suspicious transactions took its toll on market participants with (FIA) naming former president Asif Ali Zardari and his sister Faryal Talpur as beneficiaries in a money-laundering case.

Hussain Lawai, chairman of Pakistan Stock Exchange and a close aide of PPP co-chairman Asif Zardari, was also taken into custody over the money laundering case.

The money laundering inquiry that has been recently launched has affected the market with cash transacted said to be in the vicinity of a whopping Rs. 35 billion, which acted as a major catalyst, especially after the presidents of a few banks have been placed on the Exit Control List.

Political uncertainty and foreign selling, which has persisted in the market for a while now, have driven down the confidence of local participants as well. Even before trading began, the participants knew it was going to be a rough day for the stock market.

Most of the investors opted for a dump-and-run approach during the intra-day.

The cement sector took a significant hit during the first-half of the intra-day trading. Investors seemed to be unwilling to move away from their selling positions. Sectors at the bottom in the KSE 100 include Commercial Banks, Oil, and Gas Exploration Companies and Fertilizer. 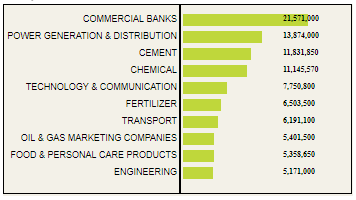 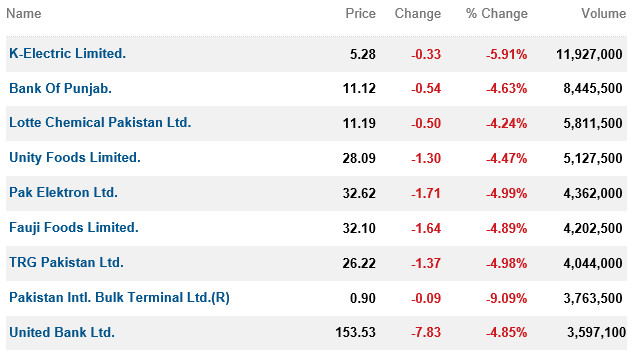 UBL, one of the three banks whose CEOs are to be produced, lost Rs. 7.80 or 4.85 percent. Summit Bank also lost 14.44 percent of its value in intra-day trading.

No individual or institution buying is coming into the market as the participants wait for the different events to unfold.

According to market analysts, investors won’t take new positions till the political setup shows signs of certainty as former prime minister Nawaz Sharif and his daughter return to the country after being handed jail sentences by an accountability court hearing the Avenfield properties reference.