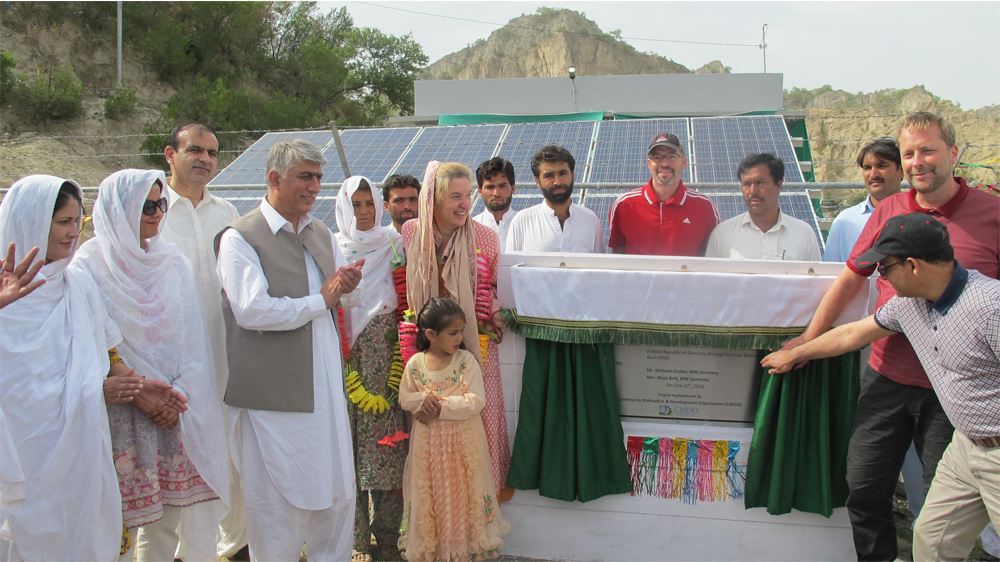 The mini-grid solar systems, implemented in small villages of districts Swabi and Karak, have a total capacity of 196kW and 185kW and jointly provide electricity from indigenous and clean energy resource to about 434 households within these districts. It is pertinent to mention here that 24 Solar mini-grid systems with a total capacity of 119 kW in off-grid villages of Lakki Marwat have already been completed.

PPAF is implementing hydropower & renewable energy (HRE) projects in Khyber Pakhtunkhwa with the financial support of the Government of Germany through the German Development Bank (KfW).

PPAF and KfW’s HRE project, comprising of two phases, is being implemented in 6 districts of Khyber Pakhtunkhwa covering 8 union councils of districts including Swabi, Karak, Lakki Marwat, Buner, Upper Dir and Chitral. The project’s Phase-I initiated in 2013, and is planned to be completed in 2018. Phase-II will follow Phase-I and will span over three years. In phase-1 as many as 68 Solar Mini-Grid Systems with total capacity of 500 kW are planned to be implemented in remote and off-grid locations of Karak, Swabi and Lakki Marwat districts with additional micro hydropower plants with total capacity of 803 kW to be implemented in Chitral, Upper Dir and Buner districts.

“As these projects are located in difficult terrains, we have to make sure that the high quality of equipment and civil structures is used efficiently and in sustainable way to ensure long life of these projects”.

She further urged the beneficiary communities to take ownership of operating and maintaining the solar systems.

Mr. Nafees Ahmad Khan, General Manager, Renewable Energy Project, PPAF, acknowledged and thanked KfW and the local communities for their support in successful completion of the projects. He added,

“PPAF is delighted to work on this project with KfW and to play active part in helping improve lives of people living in the areas which will ultimately improve socio-economic situation of the people and the overall development of the area”.