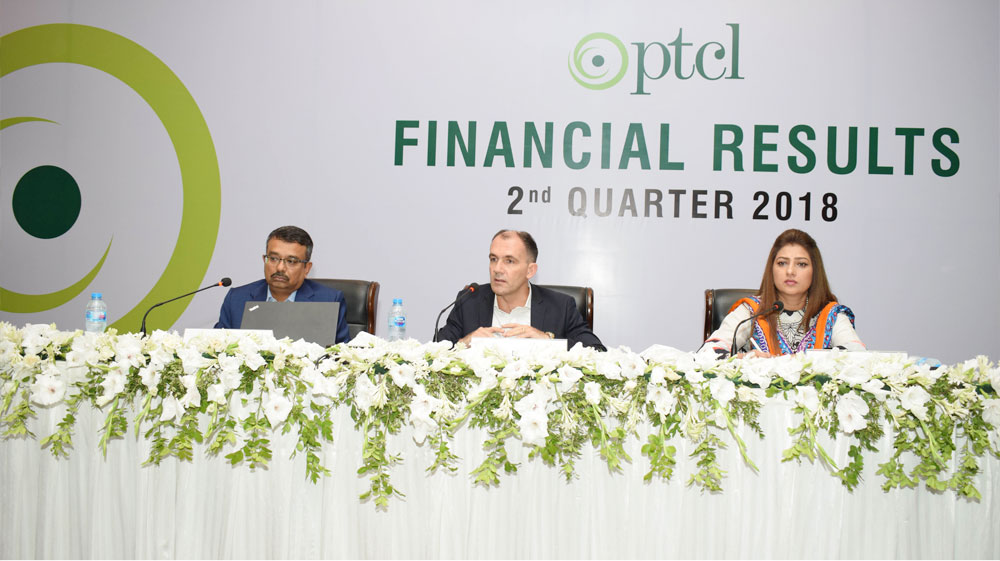 Pakistan Telecommunication Company Limited (PTCL) Group’s revenue for the 1st half of 2018 has grown year on year (YoY) by 4 percent to Rs 60.7 billion.

PTCL announced an interim dividend of Re. 1 per share, which equates to a dividend payout of Rs. 5.1 billion.

The financial results for the 1st half ended June 30, 2018 were announced at its Board of Directors meeting, which were later shared with media here on Wednesday.

Addressing a press conference, Dr. Daniel Ritz, President & CEO of PTCL Group, said that as a result of positive contribution by all group companies, the growth in revenue was made possible.

Ufone revenue has increased by 5% YoY despite tough competition in the cellular market. UBank, a microfinance banking subsidiary of PTCL, has shown significant growth of 71% in its revenue over the 1st half of 2017. He said that growth in Ufone revenues was mainly due to an increase in subscribers’ numbers.

PTCL Group’s operating profit for the period improved by 57% and remained Rs 4.199 billion, however, its net profit declined by 45% and Rs 2.138 billion, mainly due to the adverse impact of currency devaluation of Rs 1.1 billion and positive one-offs of Rs 1.3 billion of last year.

Like-for-like net profit of PTCL Group would have been higher by 28% compared to last year and Rs 3.233 billion. Operating margin remained 7 percent in first half of 2018.

Investments made in Charji/LTE during the last years have yielded positive results with YoY revenue growth in double digits. There is, however, there is a decline in domestic and international voice revenues due to continued conversion of subscribers to OTT and cellular services resulting in declining voice traffic volumes.

PTCL’s operating profit is lower by 2% compared to the same period of 2017, mainly due to customer acquisition cost spent during the 1st half of the year.

Further, non-operating income has also declined due to reduced funds on account of VSS and CAPEX investment during last year. This has resulted in a 21% lower Net Profit compared to 1st half of 2017 as reported (and 12% lower if adjusted for one-offs).

PTCL partnered with Dawn Films for the movie ‘7 Din Mohabbat in’ starring top celebrities of Pakistan. Seizing this opportunity, a TV commercial was launched, endorsing 10Mbps Unlimited Internet. PTCL sponsored Pakistan Cricket Team in International T20 Cricket series with West Indies and Scotland. On both occasions, with PTCL on the back, Pakistan T20 Cricket team won the series.