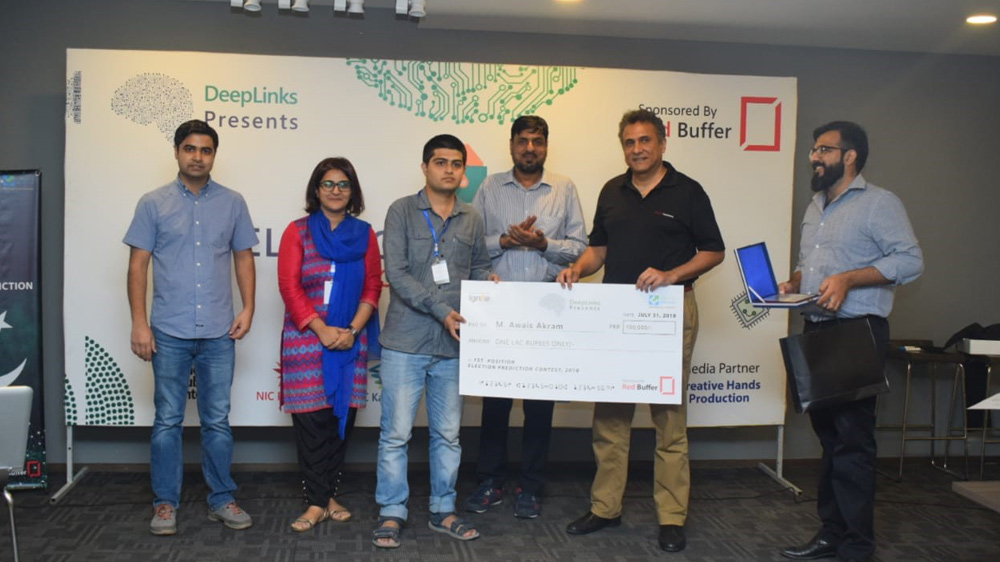 DeepLinks and Red Buffer, with the support of Ignite and in collaboration with Code For Pakistan, organized the first ever nation-wide competition for predicting election results using Artificial Intelligence and Data Science.

Engineers and enthusiasts from all over the country were invited to compete on this challenging problem with the objective or popularizing the use of Artificial Intelligence in the country and creating awareness about its ability to solve real societal problems and avail opportunities.

It augurs well that 429 participants registered themselves and competed from across the country, forming 75 teams, half of which were able to complete their initiatives and submit proposals.

Marketing and outreach for the event was conducted with the help of the nationwide network of National Incubation Centers, NIC, and finals were held at NIC Islamabad.

Prize money of PKR 100k, 50k, and 25k was up for grabs for the winners (courtesy Red Buffer). IBM was the compute partner, and offered access to IBM’s Global Entrepreneurship Program to the winning candidates. Yusuf Hussain, CEO Ignite was the chief guest at the prize distribution ceremony, and Muhammad Awais, a student from ITU Lahore, won the first prize.

Contestants were also allowed to use any data they could get their hands on – in fact, the winning candidate also used the surveys conducted by different tv channels as well as used Natural Language Processing, NLP to scrape data from the past 20 days (before the election).

Analysis of the Results submitted by Contestants

Some very interesting observations emerged from the analysis of the results. For example, the following figure shows that the predicted results give a fairly good estimate of the actual results. 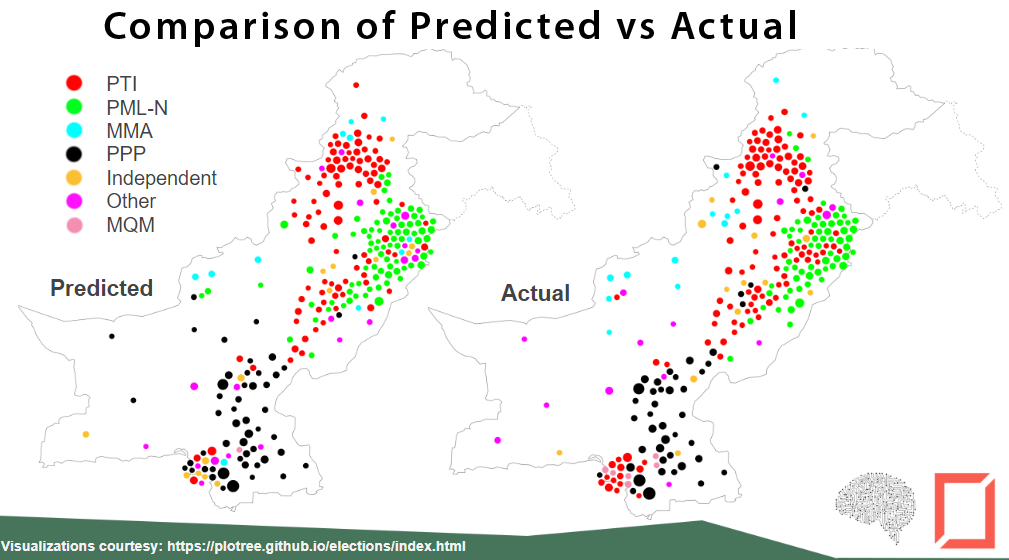 It was also observed that survey results provide an accurate predictive factor, especially when the candidate is an incumbent. Another point which emerged is that most models couldn’t predict independents very well. The reason was that most models made predictions based on a party’s popularity in a particular area – that is why they suffered when trying to predict independents. The fact that party affiliation is a key predictor bodes well for the future of parliamentary politics in Pakistan.

The event created awareness that how seemingly non-mathematical problems can be attacked via modern data science and machine learning algorithms. This event also highlighted the role that Data Science can play in the field of social sciences. Similar techniques can be used to predict the outcomes of other socio events, issues, and problems.

It also brought together like-minded people and will provide them the opportunity to work together leading to collaboration possibilities to tackle the country’s challenges. Such activities highlight the positive side Pakistan showcasing a nation which is equipped with latest and state of the art skill sets.

AI provides great opportunities as well as some threats. I congratulate Deep Link and Code for Pakistan for taking this initiative to create awareness about its uses. Congratulations to the winner for such close co-relation with actual outcomes.

AI can solve real problems. The fact that contestants were able to use relatively sparse data to accurately predict results down to individual constituencies in just two weeks is quite remarkable.

Though AI results have been announced a week after the elections, due to the time required to prepare diagnostic models, the Deep Links team checked the code base, which is publically available on GitHub, to verify algorithmic authenticity rather than random selection or any inclusion of actual election results.